How to use a commitment contract to change your habits

This is a guest post from Pop at Pop Economics, a great new blog about investing, personal finance, economics, and more.

Call it an incentive. I've written about behavioral economics over at Pop Economics for three-quarters of a year now. There are an infinite number of subjects to cover, but they all boil down to the same idea: People respond to carrots and sticks. 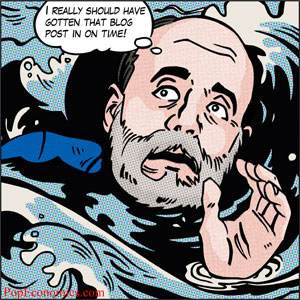 And to make sure that I hit this guest post deadline, I gave myself a very big stick. About a month ago, J.D. and I set up a legally binding “commitment contract”. If he doesn't get a guest post from me in a few hours, I owe a set of charities $1,000.

Crazy? Yes. But it's also a brilliantly simple way to defeat laziness and procrastination. I've actually flaked out on J.D. before. Heck, I've flaked out on writing for my own blog before. I like the idea of building a hugely successful blog, but every once in a while, I lose the motivation to keep churning out stories.

Commitment contracts are used for all sorts of goals. In January, you decide to lose weight, but by March, the gym you signed up for is reaping the proceeds of a dormant membership you can't break. You decide to give up smoking, but doing it “just once” while at a party leads you back to addiction.

But how likely would you be to quit if you lost $1,000 every time you skipped going to the gym or lit up a cigarette? Commitment contracts are designed to set the penalties of missing your goal so high that breaking it isn't even an option.

J.D. and I actually entered a formal arrangement, set up through Stickk.com. Stickk is a commitment contract website with a co-founder who has studied how effective the contracts can be.

In one study conducted in the Philippines, smokers committed to quit smoking for six months. If they failed a urine test that detected nicotine, they'd lose six months-worth of smoking money as a penalty. At the end of the program, the economists found that the the contracts improved the chances of quitting by 30%, which is better than the improvement other tools like a nicotine patch gives you.

But there's no requirement to make it as formal — and you don't even have to set financial stakes. Another common tactic is to make the contract and let your goals and progress be known to your friends. Rather than a financial penalty, if you fail, you have to broadcast that failure to everybody. The shame itself should help keep you on track.

But no matter the structure, the contract requires three basic components:

Screwing up any of these three can doom your success.

Your ultimate goal might be ambitious and far-off — like to lose 40 pounds or to become a millionaire. But the commitment contract should be for small steps that are easy to measure.

A Harvard economist recently tried different ways of paying students to improve their standardized test scores. One experiment he ran in New York, where students were paid for higher scores, completely bombed. But in a separate test in Dallas, kids who were paid $2 every time they read a book achieved significantly higher scores on the reading comprehension section of the test. It was the incentive for the small steps that got the big goal accomplished.

Likewise, make sure the goal is something you can easily control. Sure, I want to add 100 subscribers by November, and I have a vague idea of things I could do to achieve it. But at the end of the day, that's 100 decisions to subscribe I can't make. On the other hand, the only thing keeping me from writing is me.

Setting the Stakes and the Recipient

As I wrote above, my commitment with J.D. was $1,000. I set it so high because I wanted to make failure nearly impossible. Note the “nearly”. If my computer exploded, you bet I'd get to a library and finish this sucker. But if a relative died? It might actually be worth $1,000 to buy me out of it.

My penalty for not blogging twice per week is $100 for every week I miss. That's considerably lower. So a more minor emergency, like something unexpected at work, could theoretically convince me to pay up one week rather than post. But $100 is definitely enough to keep me from heading out to the movies rather than writing.

If you just write an informal contract with a referee, you can make the recipient whomever you want. If you choose the more formal route — your Stickk contract is a legally binding commitment — you'll have the choice between charity, an anti-charity (a cause you're against), or an individual. With each option, Stickk takes a cut if you fail.

I've wondered if J.D. actually thought through his commitment to referee. If I don't turn this post in tomorrow, J.D. has committed to slapping me with a $1,000 charge. What if I begged him not to, citing all sorts of unexpected work commitments or family events? Would he cave? [J.D.'s note: Yes, I would have caved.]

Of course, the best referee won't cave, no matter what. For that reason, it's best to pick someone whom you trust but aren't too close to.

You also need to make sure you and your referee are completely on the same page as to what your contract means. I wasn't clear in my contract at Pop Economics, and that's led to some confusion between me and my referee on what constitutes success.

Remember: It's Not a Panacea

By establishing harsh penalties for failure, you're much less likely to fail. But it's so much easier (and more effective) to want to succeed. Getting things done shouldn't be a constant battle between your laziness and your wallet. And in the end, economists argue that changing your wants — that is, actually wanting to eat celery instead of a cupcake — is the most effective way to accomplish a goal.

The perfect contract is one that harnesses the drive you have at your height of enthusiasm, so that at times of weakness, the financial penalty can back you up. The $100 looms over my head when I feel too tired to post on my blog. It's not a replacement for the genuine excitement I have at building my community.

We'll see how that goes, but so far for me, commitment contracts have kicked procrastination's ass.

Now ask yourself this question: What could you accomplish if failure were not an option?

How I paid less in property taxes

New from the IRS! Use Your Tax Refund to Buy Savings Bonds

When Will You Be Able to Retire?