I'm generally a pretty laid-back guy but, like anyone, I do have pet peeves. Because I write about money, I have lots of trivial personal-finance pet peeves. (It's “saving rate“, not “savings rate”. Dave Ramsey did not invent the debt snowball, and his version is but one kind of debt snowball. It's not the only debt snowball. See? I told you these pet peeves were trivial!)

It's silly that I'm bugged by this stuff, but I am. I'm sure you have pet peeves too, especially when it comes to your work.

One of my top pet peeves in the world of personal finance is when people who should know better conflate income and wealth. A high income can lead to great wealth — although it doesn't always — but they're not the same thing.

I see this error frequently — even in high-profile articles at major media outlets.

This morning, for example, I read an article at Vox about income inequality in Europe and the United States. The piece opens like this:

Income inequality is a growing problem in the United States. The richest Americans have reaped a disproportional amount of economic growth while worker wages have failed to keep pace.

The author elaborates: “From 1980 to 2016, the poorest half of the US population has seen its share of income steadily decline, and the top 1 percent have grabbed more.”

What bugs me here are the logical leaps from “low income” to “poor” and from “high income” to “rich”. But I can't blame the author of this article; the source material makes the same mistake.

The Difference Between Income and Wealth

Now, I'm not here to explore income equality — that's a subject for another day — but I want to talk about the difference between income and wealth…and why they're not the same thing.

Income and wealth are related, but it's a complicated relationship.

In 2016, the Don't Quit Your Day Job blog took data from the Federal Reserve's 2013 Survey of Consumer Finances to examine this very subject. They created this chart to graph the data: 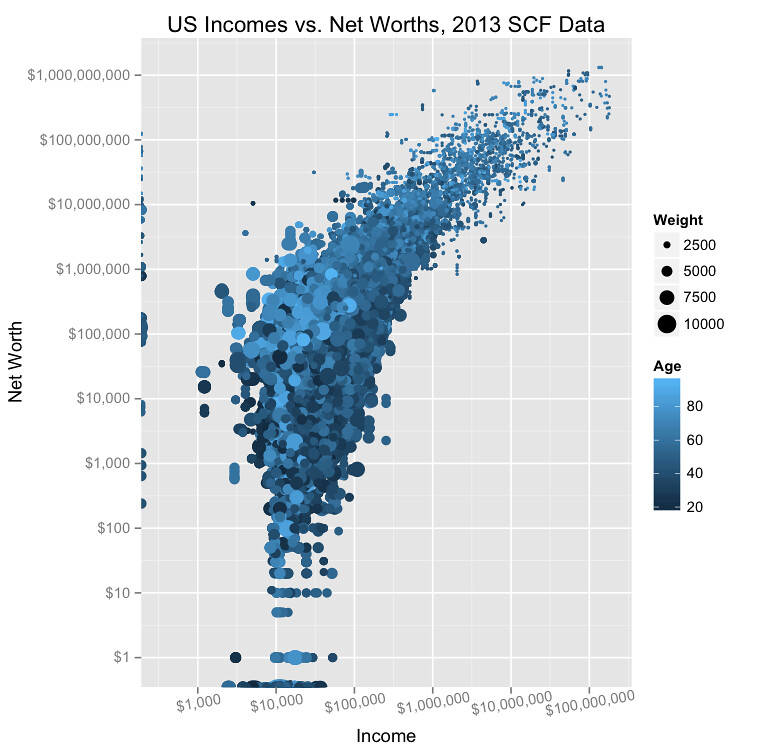 The conclusion at DQYDJ? “Yes, people with higher incomes do tend to have higher net worths.” However, “the connection is a lot looser than it may appear before looking into the statistics”.

For any given income level, people have a huge range of net worths. If you look at the $100,000 income level in the chart, for instance, folks have net worths ranging from $1000 to $10,000,000. That said, people with higher incomes do tend to have greater wealth.

In a follow-up piece, DQYDJ graphed the correlation of income and wealth by age: 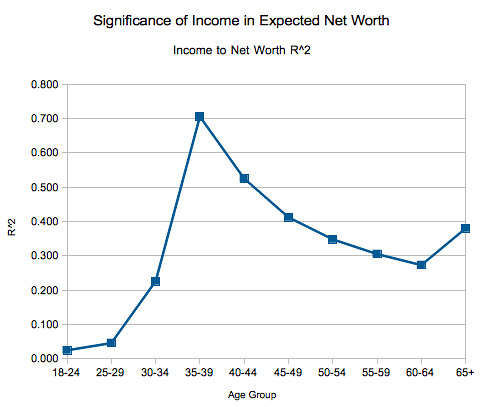 As you can see — and as you might expect — for young adults, income has very little to do with net worth. During prime earning years, however, there's a strong correlation. Then the correlation drops. Then, once you get past fifty, the correlation isn't strong at all.

Earning money is only part of the equation. What you do with the money you earn has a profound impact on your wealth.

Your income is like water flowing through a hose. The higher your income, the larger the flow of water. But wealth — net worth — is like a bucket that you're filling with water. If you have a high-flow hose, but you're spilling the water on the ground instead of filling the bucket, you're not going to fill it very quickly. On the other hand, even a trickle of water can fill the bucket if you're careful and take your time. 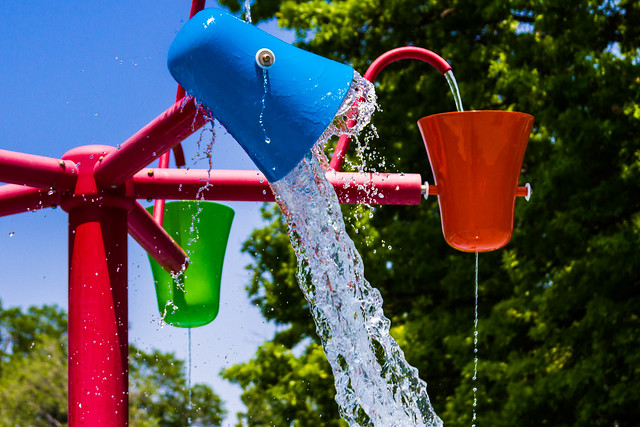 In my Real Life, I know families with household incomes approaching $250,000 that have almost zero net worth. They buy (and sometimes wreck) fancy cars, cars that quickly depreciate in value. They take expensive vacations. They eat out for every meal. They spend a ton on entertainment. These folks have high incomes and live a lavish lifestyle but they're not rich. If they were to lose their jobs, they'd be in trouble.

On the other hand, I've met with many Get Rich Slowly readers who have mundane jobs with modest incomes, yet they've managed to build small fortunes (especially in relation to their spending). How? By keeping expenses low. They may not make as much, but they have high a saving rate and they know how to invest wisely.

Yesterday at A Wealth of Common Sense, Ben Carlson wrote about the three levels of wealth. He looked at both income and net worth numbers, and at how these relate to economic class. His conclusion?

A high income can fund a lavish lifestyle, but if you spend most (or all) of that income, you're not building wealth. You're not rich. The high times probably will not last. (Believing that they will is part of the forever fallacy.)

There are 18 reader responses to "What it means to be rich: The difference between income and wealth".