It’s a Wonderful Life and the Value of Social Capital

Yesterday I made a sales call to a local business, a nursery owned by one of my former high school classmates. Keith and I didn't move in the same circles and were never friends, but I always appreciated his good nature and quick wit. In just twenty minutes yesterday morning, I got to know him better than I had the entire time we were kids.

Like my father, Keith's dad ran his own business. Both men passed a sense of entrepreneurship on to their sons. Keith runs a successful nursery; I help run my family's box factory.

Business with friends
After discussing the boxes Keith needed for shipping his plants, we began to talk about business in general, and then about the 20-year high school reunion last summer. “You should have been there,” Keith said. “It was great to see everyone, even the people I never really knew.”

“I wanted to go,” I said. “But while you guys were partying in an Irish bar, I was actually in Ireland.” Keith laughed.

We talked about old friends. We talked about how time softens the edges in relationships. When you're growing up, you remember every hurt and embarrassing moment, from first grade to your teenage years. By the time most people are in high school, they're sensitive and raw. They're afraid that everyone remembers the time in fifth grade that they peed their pants in gym class. But after twenty years, experience allows most of us to dismiss old fears and prejudices, and to view these embarrassing moments in a different light.

I feel a deep bond with the people I went to school with as a boy. Keith does, too. “The thing of it is,” he said, “now when I meet people from high school, even people like you who I didn't know very well, I feel like I have a tie to them.”

“I know what you mean,” I said. “It's like we're all part of a club. There's a sense of camaraderie.”

“Yeah,” he said. “I feel like I can trust old classmates more than other people. Do you remember Bill M.? I didn't know him very well either, but we talked at the reunion. Turns out he owns a heating company. I needed some work done on the heaters in my greenhouses, so I called him up. I was able to send a few thousand dollars of business his way.”

“That's awesome,” I said. “I do the same sort of thing. You remember Dave C.? He's my lawyer now. I bought my car from Wayne. I have my insurance through State Farm because Lynn works there. Whenever I can, I like to do business with somebody I know.”

The value of social capital
Driving home, I thought more about our conversation: Why do I like to buy from people I know? In part, it's because I like to support local businesses. I believe that doing so helps to build social capital.

People often complain about good ol' boy networks, those loose groups of old-timers that seem to control everything. At their worst, such informal associations can foster unhealthy prejudices and favoritism. But I think there's more to them than that. At their best, these networks allow men and women to build mutual goodwill through the exchange of services and ideas in a community. They foster social capital.

There's more to wealth than just money. Social capital is as real as financial capital, and sometimes more valuable.

You generate social capital when you help your neighbor repair a fence, or have your Sunday School class over for barbeque, or join a bowling league. Any time you participate in the community, you are generating social capital, both for yourself, and for the other people involved. Individuals (and communities) with high levels of social capital are able to find help when they need it; those with low social capital can spend a lot of time frustrated and alone. (This is a very elementary description of the subject. For more information, see Bowling Alone by Robert Putnam. But be warned — it's a dry read.)

It's a wonderful life
Perhaps the concept of social capital can best be illustrated by referring to It's a Wonderful Life, the 1946 Christmas classic that most of you have probably seen a dozen times. In the film, Jimmy Stewart plays George Bailey, a man poor in financial capital but rich in social capital. 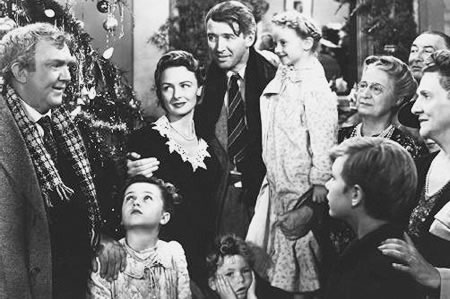 Bailey repeatedly sacrifices his dreams for the sake of others. Instead of traveling the world, he takes a low-paying job and raises a family in a “drafty old barn”. Again and again, he gives up his own interests to help his friends and neighbors. But it costs him, financially and mentally. When disaster strikes, Bailey decides he is worth more dead than alive, and plans to commit suicide, hoping that the proceeds from his life insurance policy can help make things right.

Ultimately, Bailey is saved. All those that he's made sacrifices for over the years come to his aid. It's a schmaltzy feel-good moment, perhaps, but it's a pointed example of social capital at work. When Bailey's brother declares that George is “the richest man in town”, he's not joking. Bailey may not have a lot of financial capital, but he's flush with social capital.

True wealth
We don't need to sacrifice our own interests to generate social capital. It's not a zero-sum game. Often, we can create win-win situations that allow everyone involved to profit. When Keith hires Bill M. to do work on his greenhouses, both men profit, and the transaction generates social capital. When I join a chess club at the senior center, I'm improving the social capital of the other members.

Sometimes as we're pursuing our financial goals — getting out of debt, saving for retirement, investing for growth — we can lose sight of the other things in our life. The holidays are an excellent time to remember that true wealth doesn't come from cash, but from our relationships with the people around us.

How (and where) to donate unwanted Christmas presents

Should we buy our dream house?