For years, Get Rich Slowly readers have given me grief over my charitable giving. Or, more precisely, my lack of it. I was raised in a home that gave neither money nor time to help others. As I struck out on my own, I never picked up the habit of giving. At first, this was because I had myself to worry about. I was deep in debt. How could I afford to help others when I couldn't even help myself? But after I paid off my debt in 2007, I still didn't contribute.

My reluctance to donate to charity has stemmed from several sources:

So, for a long time, it seemed easiest to do nothing.

Part of the world
Over the past year, however, things have changed. I've begun to think more about my responsibility to the world as a whole. And I've had some experiences that seem to be steering me toward…something.

Because of these events — and because of your prompting — I've taken the time to research organizations that I'm willing to support. I've been asking myself what causes are worth my time and money, what changes I want to see in the world. 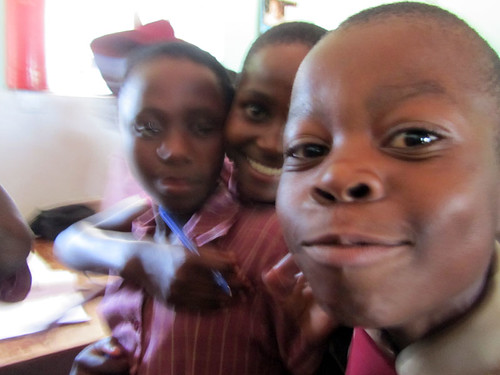 Photo taken by a boy at Chinotimba Primary School.

For instance, I feel strongly that the most important thing we can do to help those who are struggling is to improve education — especially for girls. (Educating girls is the single most powerful and most effective way to address global poverty. When you improve the status of women in a culture, you improve the standard of living.)

Also, I want to encourage the “teach a person to fish” approach instead of just giving a person a fish. That is, I want to support groups that will help others help themselves instead of organizations that only donate dollars. Plus, I'm wary of unintended consequences. Providing food and water are good, of course, because these things save lives. But without education, I worry that such “solutions” just perpetuate problems with overpopulation.

Ready to act
So, after years of hedging, I finally feel ready to give. I'm taking some baby steps. First, I've begun to talk with people about the charities they support — and why. By doing this, I've found three great causes I can get behind.

Second, I've begun to explore the idea of volunteer tourism. My real millionaire next door does some of this. He spends our winters in New Zealand, where it's summer, donating his time and energy to help organic farms. Last year, my friend Courtney spent a couple of weeks in Cambodia with her father, who is a dentist. They provided free dental care to rural villagers.

Finally, I've started Awesome People, where I hope to be able to help in a couple of ways. For instance, I want to profile people who are doing amazing work to help improve the lives of others. Also, I intend to donate all of the site's profits to charities like those I mentioned above.

Note: After we returned from Africa, Kris spent $40 on school supplies to send to the Chinotimba School in Zimbabwe. She collected a bunch of stuff we take for granted — crayons, pens, glue sticks, socks, and so on — but which are tougher to come by in Zimbabwe. When we went to mail the packages, we were shocked to learn that it would cost over $100 to mail the supplies. We didn't do it. (We now have two boxes of school supplies sitting in the living room.) This was frustrating.

Fitting the profile
Last Thursday, Kris and I attended an alumni networking event for our college. Because she and I are helping to organize our 20-year class reunion this year (are we really that old?), we sought out Amy, who co-ordinates alumni reunions and events.

Though our conversation began by going over plans for this autumn's reunion, it quickly veered in another direction. Amy knew that Kris and I just traveled to Africa. That trip was organized by Willamette's alumni office, and one of our companions was the former director of alumni relations. Amy already knew all about our adventures.

Sidenote: Turns out that Amy reads Get Rich Slowly from time to time. She has her own blog, Yard to Fork, which is about growing food at home. Because Kris and I grow some of our own food, and because Amy had questions about blogging, the three of us had lots to talk about.

“You know what?” I said. “I think the main thing that came out this trip for me is a readiness to contribute to charity. That's something I've never really done. Except to Willamette, of course.”

We chuckled at that. Amy used to be in charge of the phone drives, in which current students call alumni to hit them up for cash. She knows a lot about fund-raising. In fact, Amy now teaches a class at another local college about fund-raising for non-profits.

I told Amy that I was looking to support groups like Charity: Water, Room to Read, and Edge of 7. “But I hate just sending my money to a charity,” I said. “I feel like I'm just sending it to a black hole. I'd rather give my time or energy, like that Oregon Food Bank volunteer project you organized last year. And what I really find appealing is the idea of volunteer tourism.”

“What?” I asked. I was afraid I'd said something stupid.

“It's nothing,” she said, smiling. “It's just that you fit the profile so well.”

“What profile?” I asked.

“There are very clear generational profiles for giving,” Amy said. “You fit the profile for our age perfectly.”

“Older people like to write checks,” she explained. “They want to pay people to do the things they can't do themselves. Younger people want to be in the thick of it. They want to be involved. They want to go places and be a part of the change. Our generation is in the middle. You can afford to send money, but you want to be involved too, to have a hands-on contribution to each project. You want to connect with the people you're helping. That's the whole point. It's not just about sending money.”

Note: Amy and I also talked about how colleges and universities court potential donors, a process that can take months or years. She told me that people who are new to fund raising are often misled by showy displays of wealth. “Have you read The Millionaire Next Door?” she asked. “Of course,” I said. “The authors write about the Big Hat, No Cattle syndrome,” she said. “That's where somebody looks rich because they dress nice and drive a fancy car, but they don't actually have any money. I try to teach that your best donors are often living in Oregon City and driving a pick-up truck.”

Moving forward
I still haven't made any major donations of time, money, or energy. That's okay, though. Mentally, I've made the switch. I'm ready to give. It's no longer a matter of whether I'm going to — it's now a matter of when, where, and how.

In fact, if I can figure out a way to swing it, I'd love to spend a few months living abroad, lending my efforts to building a school or a library or digging wells or something of that ilk. But what about Kris? She can't leave her job for that long. And what about this blog? Sure, I've been gradually reducing my role here — but that's not the same as eliminating it.

In the meantime, I'll continue to research charities to find causes I can support (with money and more). I'll look for other chances to volunteer in the local area. I'm ready to take more baby steps toward philanthropy.

Things Your Supermarket Won’t Tell You