How I learned to stop worrying and love DIY 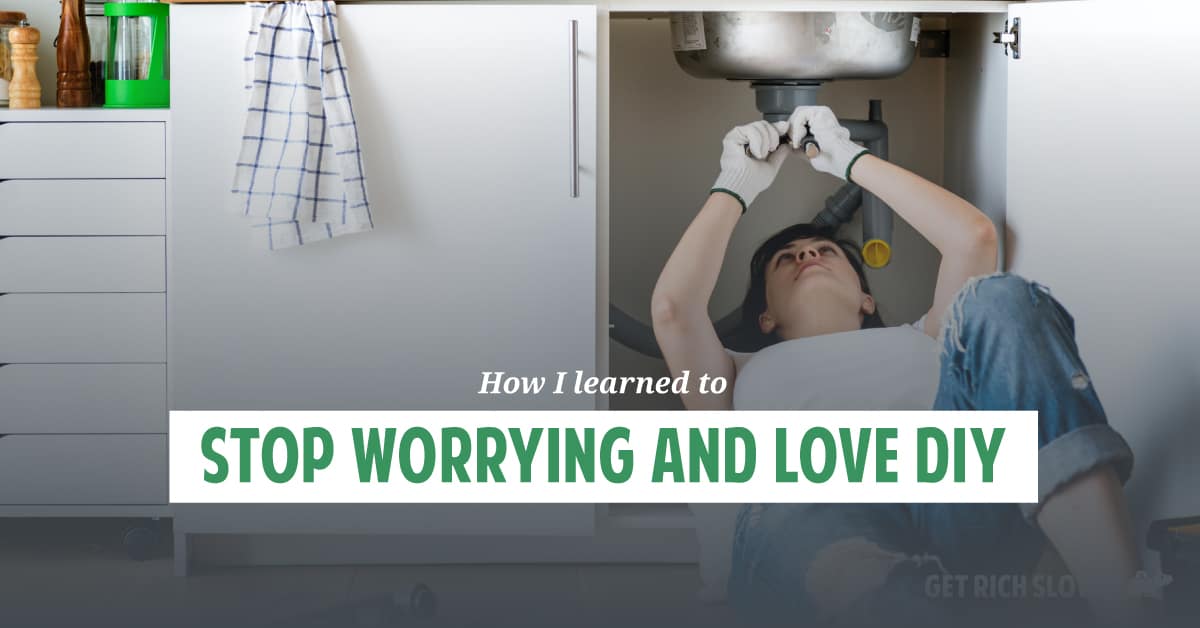 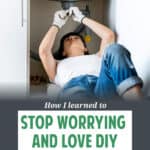 “Oh good,” Kim said when I rolled out of bed yesterday morning. “I’m glad you’re up.” She gets up at 5:30 for work most days, but I tend to sleep in. Especially during allergy season.

“Huh?” I grunted. It was 6:10 and I was very groggy. My evening allergy meds kick my butt. Plus, I hadn't had my coffee yet.

“Something’s wrong with the bathroom sink,” she said. “Look. It’s leaking. The floor is soaked.” She wasn't kidding. The bathmat was drenched. When I looked under the vanity, I was greeted by a small lake.

“Ugh,” I grunted. This wasn't how I wanted to start my day.

Kim kissed me goodbye and hurried off to work. I pulled on a pair of pants, poured some coffee, pulled out the vanity drawers, and got to work.

I was worried that I might have caused the leak when I replaced the sink's pop-up assembly last month, but no. The problem was obvious: The hot water line to the bidet (which I installed in October) had worked itself loose. (By the way, I love my bidet. Too much information, perhaps, but it's some of the best sixty bucks I've ever spent.)

Fortunately, the fix was simple. I reattached everything, then added a light layer of tape to prevent similar problems in the future.

Note: As a safety measure — to make sure I wasn't missing anything — I took photos of the issue and made a trip to the hardware store to ask their advice. They told me everything should be fine.

This might seem like a small thing to some folks but it’s a big deal in my world. You see, I’ve never really been a DIY type of guy. I used to get overwhelmed by home improvement. I felt unprepared, incompetent.

More and more, though, I’m learning that I can do it myself. It just takes patience and perseverance. And the more projects I complete, the more confidence I gain.

When I was younger, I avoided do-it-yourself projects whenever possible. As a boy, I never learned how to be handy around the house. I could program (or build) a computer. I could write. I could do accounting or analyze literature. But I couldn't replace a broken window or repair a leak.

My ex-wife and I bought our first house in 1993. Fortunately, it was in great shape. During our ten years in the place, there weren't a lot of things that needed to be repaired.

And when things did need work, they were obviously beyond our abilities. The water heater exploded on Christmas morning. The electric wall heater caught fire. We discovered an infestation of carpenter ants. These were problems I was never going to fix myself. We hired experts to solve them for us.

In 2004, we moved to a hundred-year-old farmhouse. The previous owner had lived there for fifty years and had done a lot of lazy repairs himself.

Because buying the place tapped nearly all of our financial resources, we were forced to handle some of the repairs and remodeling ourselves. We hired somebody to hang drywall for us, but we tore down the old walls ourselves. To fix the faulty wiring, we asked an electrician friend to help us find problems and make repairs. And so on.

Still, I didn't feel completely comfortable with DIY projects around the house. I did them when I had to, but mostly I tried to put them off — or to pay somebody else to solve the problem.

After our divorce, I deliberately sought a place where I did not have to deal with home improvement. I bought a condo. All exterior work was handled by somebody else. Sure, I was on the hook for problems inside my unit, but those were easy to foist on contractors. For five years, I completely avoided home repairs and home improvement.

When Kim and I bought our current country cottage, we had a chat. “You know you're going to have to do lots of DIY projects,” she said. “There's a ton wrong with the house — and that's just the stuff we know about.”

“I know,” I said. “But I'm older now, and I'm actually looking forward to developing my DIY skills. I have a better attitude. I think I'll be fine.”

You know what? I have been fine. After paying a small fortune to get the major things handled — roof, siding, floors — we've deliberately been taking on the day-to-day stuff ourselves. It's much slower this way, but it's also cheaper. Plus, it's more satisfying.

In the past eighteen months, we've:

Some of these projects (the writing studio, for instance) were major. Some (like the laundry-room lighting) were minor. All of them have helped me gain confidence that yes, I can do things myself.

It's still no fun when I wake up to find that a leak has flooded the bathroom. But at least now I don't feel overwhelmed. I'm able to pause, think about what needs done, and then tackle the job. It's a totally different feeling than I had even three years ago. Three years ago, stuff like this would overwhelm me. Now, I almost love these DIY projects. (For real!) Maybe it's because I'm old.

Yesterday as I was crawling under the bathroom sink, I thought about how I've learned to love DIY, how I've shifted from viewing these tasks as chores to viewing them as opportunities to learn.

As I fixed the leak, I made a mental list of the things I've learned over the past couple of years, the guidelines I follow to make sure my home-improvement projects are productive and fun instead of something I dread.

I believe these nine “rules” have helped me embrace the do-it-yourself mindset:

Here's another guideline: Keep the end in mind.

Home repair and home improvement can be annoying because there are other things you'd rather be doing. You could be hanging out with friends. You could be reading a book. You could be playing a game. The last thing you want to do is replace a broken window.

I've learned to consider the reason I'm doing the work. I know that when I replace the kitchen faucet, we'll no longer have to worry about leaks. Plus, we'll have a better, more attractive fixture. After we've spent six hours staining the deck, we'll get years of enjoyment from the space. Once I build out the writing studio, I'll have an ideal space to work in.

Don't focus on the drudgery of the moment. Remind yourself of the ultimate payoff.

Last weekend, I tackled a DIY project for fun (gasp). I installed a car stereo.

Three months ago, I bought a 1993 Toyota pickup for projects around our little acre. Fittingly for the era, the truck came with a tape deck. Unfortunately, I don't own any tapes. I purged the last of them over a decade ago.

Still, I couldn’t resist an indulgence. “I wonder if you can get Taylor Swift on cassette,” I thought to myself. I checked Amazon. Sure enough, if you’re dumb and determined like I am, you can order Reputation on cassette for 30 bucks. So I did.

When the tape came, I was disappointed to discover that while the radio worked fine, the tape player was busted. What to do? What to do? Should I write off the T Swift tape as a $30 loss? Or should I go all in, take the risk of buying a new tape deck?

I think you all know the (irrational) course of action I chose.

I found a $70 tape deck on Amazon and ordered it. Last weekend, as a birthday present to myself, I spent an entire day installing the thing — despite having no clue what I was doing.

The project was fun! (Frustrating but fun.)

I got to take apart the truck’s front console, puzzle out the messed up wiring (a previous owner had spliced new speakers incorrectly), connect the new tape deck, then put everything back together. On my drive to work at the box factory Monday morning, I cranked up the Taylor Swift. The dog was unimpressed but I had fun.

7 Essential Skills to Protect Yourself from Scammers

Why buying individual stocks is a bad idea

Yes! Sign up and get your free gift
19 Comments
Oldest
Newest Most Voted
Inline Feedbacks
View all comments

As featured in:
498 shares
wpDiscuz