Lighting a Fire: How to Overcome Procrastination 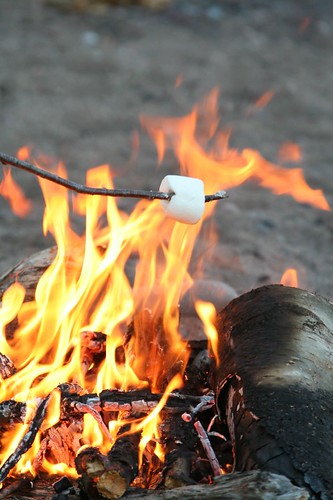 I like to say that I write well under pressure, and to a degree, it's true. Nevertheless, most writers would agree that writing is often an uncomfortable process filled with self-doubt. It's human nature to avoid pain and discomfort, and I know my fears are the underlying reason that I sometimes find myself furiously writing at the 11th hour.

Everyone can relate to the act of avoiding an unpleasant task, and we all know that hardest part is just getting started. Writing the first five words. Sorting the first load of laundry. Adding up your total debt.

Once I overcome inertia and actually pick up the proverbial pen, I find that words flow freely. Before I know it, I've written 1500 words, finished the laundry, and paid off the credit cards. When we light a fire in ourselves, we create momentum that propels us forward. Our fire, or zeal, keeps us disciplined and focused on the goal.

Lighting a fire
Some of us have to work harder to light the fire, but even the most focused people sometimes have one of those days when we waste hours on Facebook to avoid real work, eat 10 cookies when we swore we'd stop at two — or splurge on another winter coat even though we live in Texas.

When lethargy or ambivalence strike, it's helpful to think of yourself as an observer of your own actions. The part of yourself that knows what you should do can look (with compassion) at your actions, and maybe even find some humor in your habits. If you have a hard time being the compassionate observer, take a few moments to answer the following questions for yourself the next time you're procrastinating:

Once you start to observe yourself, your habits are exposed and drop away. We usually know what we should be doing, but we rarely take time to identify the real reason why we aren't doing it. Instead, we give in to our immediate wants and feel guilty later, or we resist temptation and feel deprived.

Stoking the flames
The good news is that once you get moving, you generate more and more momentum, so that each subsequent action is less difficult than the one before. This is similar to starting a camp fire. In the beginning you burn tinder and kindling, careful to shield it from the wind and blowing softly at the base to produce flames. As the fire grows you gradually increase the size of the kindling until the fire is established. Once the fire is blazing, you only need to add larger pieces of wood every now and then to keep it alive.

There are many ways to keep your own fire burning, such as:

Why bother?
There are some obvious reasons to overcome procrastination. We want to lose weight. Or to get a promotion. Or to pay off our credit card debt.

But there's a deeper psychological gain to discipline, as well. Discipline is a word with some negative connotations. It sounds hard. Boring. It brings to mind punishment. No wonder we avoid it! But when we aren't disciplined, we create a cycle of suffering for ourselves. Psychologists often cite procrastination as a coping mechanism for anxiety. It becomes a vicious cycle when procrastination results in stress, guilt, and disapproval for not fulfilling commitments — feelings that often result in further procrastination.

Avoidance may make you feel good in the short term, but it creates unhappiness on a deeper level. We know we aren't being true to ourselves. We know that we're capable of more.

Ani Pema Chödrön, author of When Things Fall Apart: Heart Advice For Difficult Times, writes, “What we discipline is not our ‘badness' or our ‘wrongness.' What we discipline is any form of potential escape from reality.” When we look at it in that light, discipline isn't punishment at all, but rather a way to steer ourselves toward a fulfilled life. When we practice discipline, we make choices that are true to our goals and ambitions.

Discipline enriches life
A personal example of this that comes to mind is travel. Going to Italy a few years ago was eye-opening for me. I learned that I feel alive and adventurous in a foreign country. I enjoy trying to speak with the locals, and I'm curious to know where they work, what they eat, and what they do for recreation. I even loved the inconveniences — such as when our bus, already packed with passengers, stopped for a nun, and we somehow made more room (getting to know our fellow passengers intimately).

Truth be told, I couldn't afford that trip at the time. It went on a credit card. But it was the first time a little voice in my head started to question my spending habits. I knew, just knew, that I had to see more of the world. And to do that, I'd have to clean up my financial act. Discipline was the way to let the unimportant stuff fall away so that I would be able to do the things that would make my life more pleasurable. I realized I actually didn't care about buying new clothes with every paycheck. It had simply been a way to mindlessly pass the time.

Of course it wasn't like flipping a switch. I had a lot to learn and a lot to let go of to get to where I was consistently saving for travel every month. But it's a good example of how discipline has enriched my life, where I used to think it would be a burden.

There will still be times when I buy something and realize later that it's not anything I truly need or want. Perfection shouldn't be the goal — we'll only drive ourselves mad trying to reach it. Life is more enjoyable when we strive for self-awareness and self-compassion instead.

J.D.'s note: I believe that learning to overcome procrastination is vital for success in all areas of life, not just personal finance. I've written about the subject several times before: “How to beat the procrastination habit“, “How to build confidence and destroy fear” (procrastination often stems from lack of confidence), and “Procrastination can cost you money“. Follow April's advice: Practice discipline to pursue a better life.

Student loan debt: How I got in deep