I've been thinking a lot lately about a quote from J.D.'s review of The Total Money Makeover:

My husband and I recently made an unusual decision, and I'm in need of a motto that I can repeat to myself every time I question our choice, which I probably will at some point. 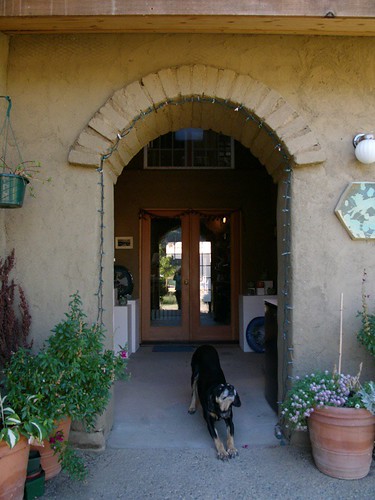 I've mentioned in previous GRS posts that my husband and I are building a house. As we started on the final construction documents,we began working with a lender to sort through the construction loan. It's not a fun process, let me tell you. Half of what the lender said went right over my head, despite my short-lived foray into the real-estate industry.

The first issue that arose was that we'd have to have a two-time closing. This means there's one closing at the start of construction and a second closing after the home has been built to refinance into a permanent mortgage. Apparently one-time closings, which are loans with a single close for both the construction term and the mortgage, are a thing of the past.

The problem is that my husband and I couldn't have a change in employment until the house was finished and the second closing was complete. But he's planning to start his own business. Also, if one of us happened to lose our jobs, we'd be at the mercy of the bank. Even if we could easily make our payments from my freelance income, the bank wouldn't recognize that income source until I had two years of tax returns on the business. It was a concern, but we decided to move forward.

The lender sent the estimates for interim and permanent loans. As I sorted through the initial fees worksheets, I saw the standard stuff:

It's not that I didn't expect these fees, but they were sure adding up quickly. Also, we could expect a good interest rate on our mortgage, but the interest we'd pay fora 30-year loan would double the total cost of our home. Again, not unexpected, but still disconcerting when I was plugging in our numbers.

Another issue was that we'd need $15,000 to close the interim loan. With an interim loan, the bank requires 20% of the total value of the land plus improvements (i.e., the house). We have a lot of equity in the land, but not enough to cover 20% of land and house value. Since we were unwilling to tap our savings, we'd have to wait until autumn to start building.

I was getting a sinking feeling in my stomach, like we were going to be trapped. My husband couldn't start his business. If one of us lost our jobs, it would be the bank's decision whether to work with us, on their terms, or not.

Finally, the relationship with our architect, who also was to be our builder of record (another lender requirement), was deteriorating, causing us to reconsider the arrangement.

My husband and I are in a unique situation. My parents own land in the country, and we live next door to them, rent-free. This has allowed us to build a lot of equity in the land we purchased, which is five minutes away. My dad also is in construction, and he's able to do the majority of the work to build what he can for us and subcontract the rest.

It might sound crazy not to take advantage of our situation, but there's something to be said for having your home finished with all of the amenities you want, such as a dishwasher, carport, bigger kitchen, laundry room, and more space to host guests. I have this dream of what our home will look like, of what it will feel like to wake up in it every day, and it's hard to be patient.

I started to run numbers on how long it might take to build our home if we paid in cash; assuming no change in income, it looks to be five years — six if I'm being super conservative. I assumed a completion date of April 2015. If we went with the loan, we'd probably complete the home in September 2011. By waiting about four years longer, we'd own our home and land outright, as opposed to paying on it for 30 years. Even if it takes longer than expected, it's still a good deal.Owning our home sooner would give us so many options:

The point is that we'd have those choices. Our decision came down to having the home now, or having more freedom later. Again I thought of Dave Ramsey's quote:

You can probably figure out what we decided to do. We're going to pay in cash, building as we can. Impatience is not worth the headaches, fear of losing a job or the house, and the interest we'd pay if we continued with the construction loan.

I realize we're in a fortunate position. If our circumstances were different, this might not be an option, however, I believe our choice and Ramsey's delayed gratification advice is relevant to everyone.

Every time I've put my impatience aside, the outcome has been positive. This was the case when we put off buying a second vehicle and when we moved out to the country, originally thinking we'd buy a house in the city as soon as possible.

Besides patience, delayed gratification also requires resolve. When you make choices outside of the norm, friends and family members might think you're nuts. They mean well, and they're only thinking of you, but some of them will definitely think you've lost your mind. One car for two people?! You're just asking for a divorce! It can be hard when you're already questioning yourself. The trick to not letting these comments derail you is to remember the reasons why you made your decision, and maybe find an affirmation, which is why I'm going to print Ramsey's motto and read it often.

Delayed gratification isn't easy, but it usually brings the most rewards.

How has delayed gratification benefited you? How have you exercised patience and resolve? Share your tips — I'm probably going to need them!

There are 100 reader responses to "Living like no one else".