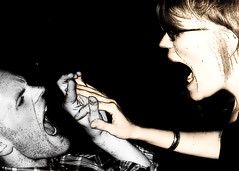 Social psychologists have found that people tend to choose their significant other based on similarities—similar attitudes, values, and even similar names.

Those findings would seem to suggest that people with similar spending habits would be attracted to each other, too. But a working paper published last year found the opposite to be true. In “Fatal (Fiscal) Attraction,” Rick, Small, and Finkel, professors of the Wharton School of Finance and Northwestern University, found that while most singles say that their ideal mate would have similar spending habits, when it comes to feelings toward spending, opposites attract.

The spendthrift-tightwad spectrum
Rick, Small, and Finkel used a survey to establish where study participants fell on a spendthrift-tightwad spectrum. According to the paper, each of us feel a degree of “pain of paying.” Spendthrifts feel too little pain, causing them to spend more than they ideally would want. Tightwads experience too much pain, causing them to enjoy their money less than they would like. It is important to note that the survey was created so that those on the extreme ends of the spectrum were not simply savers or spenders, but also were the most unhappy with their emotions toward spending.

Opposites attract
If people choose their spouse based on similar attitudes and values, then why would a tightwad fall for a spendthrift, especially if her ideal mate is a tightwad, too?

It turns out that while we look for similar traits in most cases, it depends on whether a person likes or dislikes a trait in themselves. The study found that the more unhappy someone is about their own emotions toward spending, the more attracted that person will be to his or her financial opposite. Deep down, a tightwad might dislike how crazy it makes her to spend $10 to see a movie with her friends, even though she can easily afford it and wants to go. Because she finds it painful to spend and dislikes that about herself, she's likely to fall for a guy who spends more liberally.

Bad news for marriages
Unfortunately, the attraction to one's fiscal opposite doesn't bode well for the marriage. The study found that the degree to which spouses differ in the tightwad-spendthrift spectrum is negatively related with marital bliss. Rick, Small, and Finkel wrote:

Husband/wife differences in emotional reactions toward spending are associated with greater financial conflict in the marriage, which is in turn associated with diminished marital well-being.

And while there's no scientific proof that money is the root of most divorces, money does create conflict in 84 percent of marriages, according to the findings of a 2007 Money magazine survey.

They strained their chests against enormous weights, and with mad howls rolled them at one another. Then in haste they rolled them back, one party shouting out: “Why do you hoard?” and the other: “Why do you waste?”

Rick, Small, and Finkel start their paper with the above quote from Dante's Inferno, and the results of the study make a marriage of opposites sound doomed from the start. But marriages of tightwads and spendthrifts can thrive if they can manage to find common ground.

My own experience has been that differing traits can be a positive thing. While neither my husband nor I spend excessively or save compulsively, he is much more easy-going in general, whereas I fretted for months over buying a computer I needed for my freelance work. (I couldn't actually complete the online order for my laptop until he was sitting next to me. I need moral support for big-ticket items.) I appreciate the way his influence has helped me lighten up, yet it was my geeky love of spreadsheets and math that helped us develop a concrete plan to pay off our debt and build up our savings. Differences can help you grow as a person.

Are any of you a spendthrift in a relationship with a tightwad, or vice versa? How do you successfully deal with your different approaches to money?

How and why I sold Get Rich Slowly

How I Learned to Stop Worrying and Love to Bargain