Made by Hand: In Praise of Amateurs

Note: I'm afraid this post is long and rambling. So sue me. I've been meaning to write about this subject for a long time, and finally felt moved to do so. This article may be amateurish, but that's kind of the point…

My father was a serial entrepreneur — he was always starting businesses. But more than that, he was a serial inventor, a master of DIY, an amateur everything.

When I was a boy, my father:

Note: I taught myself to program on the Apple II also. Starting in 1978 (when I was in fourth grade), I learned to type in the programs from various computer magazines. Since many of these programs were written for other kinds of computers, I had to teach myself how to modify the programs to my needs. And since Dad wouldn't buy any computer games for us, I had to write my own.
Note: The box factory continued using Dad's programs up until around 2001. Sometime during the late 1990s, our Atari ST computers began to die. Reading the writing on the wall, I taught myself Visual Basic on the PC and spent several months re-creating Dad's programs. We gave up the Atari ST when the 16-year-old external hard drive finally croaked. 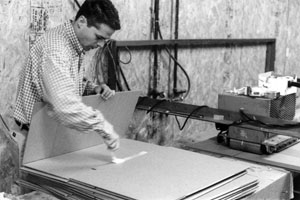 When Kris and I decided in 1993 that we wanted to start our own vegetable garden from seed, my father helped me build a small greenhouse. We didn't use any blueprints; he was the blueprints. One long Saturday, we bought lumber and nails and plastic sheeting, and he stood around watching me, telling me what lengths to trim the two-by-fours and at what angles. He didn't sketch anything out on paper — he just told me what to do and I did it. That greenhouse is still standing.

But all of these things barely scratch the surface. These are just the things I remember, and mainly his successes. My father did more: He wrote poetry (mostly bad poetry), played guitar, drew funny pictures, spent a couple of summers raising 40+ acres of wheat, flew airplanes, sailed boats, and more. When he contracted the cancer that eventually killed him, he bought a microscope so that he could draw his own blood and look at his dwindling supply of white blood cells.

Made by hand
So what? What does all of this have to do with personal finance? I've already written a lot about how my parents — especially my father — were poor at handling money or growing their savings account. (In fact, all of Dad's extensive and expensive hobbies surely played a role in our family's poor financial standing.)

Well, I just finished reading an uncorrected proof of Mark Frauenfelder's Made by Hand, which is due to be published in late May. In the book, Frauenfelder — who is perhaps best known as the co-founder of Boing Boing and editor of Make magazine — chronicles his experience dabbling in the world of do-it-yourself (or DIY). The book includes chapters describing how Frauenfelder (intentionally) kills his lawn, grows food, raises chickens and keeps bees, brews tea and coffee, builds musical instruments, carves kitchen utensils, and, most of all, learns how to learn.

The book isn't a practical guide to anything. You won't learn how to keep your own bees or carve your own kitchen utensils in Made by Hand; instead, you'll get the pleasure of watching over Frauenfelder's shoulder as he does these things. And, if you're like me, you'll be reminded of how much we, as a culture, used to do ourself.

Note: If you're looking for a practical guide to these sorts of DIY projects, seek out a copy of Back to Basics: A Complete Guide to Traditional Skills [my review] or pick up a copy of a homesteading magazine. (My favorite mag — by far — is Countryside, which also has a great website.)

For good or ill, the United States has become a service economy. We pay people to do all sorts of things we used to do ourselves. In some cases, this makes sense; “outsourcing” can free us from work we find drudgery, allowing us to pursue our passions. But sometimes this reliance on professionals and experts makes us more detached from the things we ought to know about. (As a hypothetical example: If you pay a financial adviser, you may think there's no need to know about asset allocation and diversification and all that boring stuff — but there is.)

Frauenfelder believes — as do I — that the DIY ethic is only partly about the things you produce. It's also about learning how to learn, about connecting with others who share your interests, and about taking pride in your accomplishments. (Look! I built a personal-finance blog read by millions of people every year!) There's a reason Get Rich Slowly has a DIY category, even if it's seldom used: Doing things yourself is a great way to save money and increase happiness.

Note: I'd love to provide a more detailed review of Made by Hand, but I can't. The copy I have is an uncorrected proof, and I'm sure things are going to change by the time it's published in a couple of months. Let's just say that I think the book is great, and I encourage you to pick up a copy if you're at all interested in DIY.

In praise of the amateur
After reading Made by Hand, it occurred to me that much of my own personal philosophy is about finding ways to do things myself. I don't (and can't) do everything myself, but I get the most pleasure in life when I'm producing instead of consuming. I also thought of other folks I know who do stuff. My father was one of these, but I know (or know of) many others, such as:

The thing is, these folks are all amateurs (and so am I). They're not trained pros. They do these things because they love to, and this passion aids their performance. When they fail (as they inevitably do), they try again. (I think Craig has built his mud oven at least three times because it keeps falling apart.) These amateurs find ways to succeed, even if it's not a success in the eyes of the world.

There are a lot of people who dislike amateur work because they think it's poorer quality than that put out by the pros. That's fine. I get that perspective. But for myself, I get much more value for my money when I pay five or ten bucks to see a community theater perform than when I pay fifty or one hundred to see a Broadway show.

I'm not saying that you have to choose one or the other; I'm saying there's room for both. But for some reason, we've abandoned the stuff of talent shows and living-room concerts. I'd like to see more of that. I want to be awed by the stuff my friends make and do.

Action is everything
As always when I dwell on this subject, I'm reminded of Sarah Dyer's manifesto, “Action Girl's Guide to Living”. I've linked to this many times before, and nobody seems to like it as much as I do, but that's okay. I think it's great, especially this abbreviated bit (which I think I pulled from an actual Action Girl comic book):

ACTION IS EVERYTHING! Our society, even when it's trying to be “alternative” usually just promotes a consumerist mentality. Buying things isn't evil, but if that's all you do, your life is pretty pointless. Be an ACTION GIRL! (Or boy!) It's great to read / listen to / watch other people's creative output, but it's even cooler to do it yourself. Don't think you could play in a band? Try anyway! Or maybe think about putting on shows or starting a label. Don't have time/energy to do a website yourself? Contribute to someone else's website. Not everyone is suited to doing projects on their own, but everyone has something to contribute. So do something with all that positive energy!

I love that. And I think it has everything to do with personal finance and happiness. (When I say, “Nobody cares more about your money than you do“, I'm thinking of Action Girl and the DIY ethic.)

What I value most
My father died in 1995, ten days shy of his 50th birthday. I wasn't very close to him at the time; our relationship had grown strained over the last few years of his life. But in recent years, I've become more and more sentimental about all the stuff he knew and did.

A few years ago, I realized that nobody in our family actually owned a food grinder or a wheat grinder from the old Harvest Mills days thirty years ago. How was that even possible? I managed to track down a food dryer via Craigslist, but the wheat grinder was more elusive. 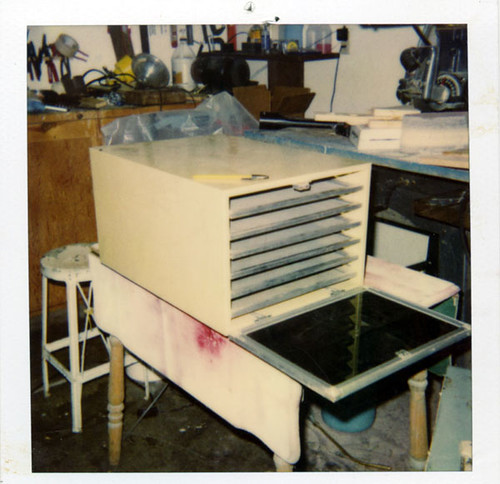 One of my father's first food dryers, made by hand.

Then one day, we were scouring our favorite annual garage sale. And there, sitting on a table, was a Harvest Mills wheat grinder. I knew it instantly from its shape, even though I hadn't seen one since the 1970s. It was marked at $100. Being a frugal fellow, I tried to bargain with the owner. No go. He wanted $100. That was fine, though. I gladly paid the man the money. I would have paid $1000, if that's what it would have taken.

Like most Americans, Kris and I own a lot of Stuff. Some of it, like the computer I'm using to write this post, is actually worth a fair bit of money. But you know what? None of it is worth as much to me as my father's food dryer or the painting of Kermit the Frog that Jolie just made for me. This computer (and most of the other stuff in my life) is impersonal and mass produced, but these other things were created by people I know.

How to meal plan and save some cash

How to cancel COBRA insurance