By now, you've probably heard of the famous Stanford marshmallow experiment. Most folks are familiar with this fifty-year-old study and its conclusions. In case this is the first you've learned of it, however, I'll give a quick review.

During the late 1960s, psychologist Walter Mischel tested the willpower of young children (roughly four years old). A researcher would bring the children — one at a time — into a room where they had access to a selection of treats, including marshmallows. The children were told that they could eat have one treat right away or, if they waited fifteen minutes, they could have two. Then the researcher left the room.

While this study gave researchers an immediate glimpse at how children handle delayed gratification, it also yielded some interesting long-term results. In 1990, Mischel (and colleagues) reconnected with some of the kids from the marshmallow test to see how life had turned out for them.

This second study revealed that the children with the best self-discipline at four years old grew up to be more popular, more successful in school, and better able to handle stress. The kids with patience and willpower were less likely to turn to drugs and they were more physically fit. In short, the ability to wait fifteen minutes to earn an extra marshmallow as a preschooler seemed to be an excellent predictor of how well a child would be able to delay short-term gratification later in life in order to pursue long-term goals.

That's it. That's the marshmallow test. Seems simple, right? Yet this simple experiment has become one of the most oft-cited studies in the world of pop psychology. You'll find it in books about entrepreneurship, habit formation, decision making, and — yes — personal finance.

New research shows that perhaps the link between childhood willpower and adult achievement isn't as strong as we once believed.

The new study — the full text of which is available for free, at the moment — attempts to remedy perceived flaws in earlier experiments. It uses a larger sample size, for instance, and draws info from a wider range of subjects. (The original studies used kids from the preschool on the Stanford campus, a relatively limited population.)

This new study found that yes, there was a correlation between the ability to delay gratification and future academic achievement. However, this correlation was only about half as strong as reported in the original marshmallow test.

Among kids whose mothers did not have a college degree, each extra minute a child was able to wait before eating a treat, his first grade achievement (how do you even measure that?) improved by roughly “one tenth of a standard deviation“. (To my mind, this still seems like a relatively substantial effect.) Academic achievement at age 15 showed a similar differentiation.

Among kids whose mothers did have a college degree, the correlation between childhood willpower and future academic achievement was much smaller.

“We observed that delay of gratification was strongly correlated with concurrent measures of cognitive ability, and controlling for a composite measure of self-control explained only about 25% of our reported effects on achievement. These results suggest that the marshmallow test may capture something rather distinct from self-control.“

What else might the marshmallow test be capturing? Interesting question. When looking at other variables tracked by the study, there seems to be a correlation between willpower and socioeconomic status. In households with higher income and greater education, kids waited longer before eating their marshmallows. (For more, see this recent article in The Atlantic.

In college, I studied psychology. In the twenty-five years since I left school, I've spent a lot of time reading about psychology in my spare time. I'm fascinated by the human condition, by the things that shape us, motivate us, give us happiness and fulfillment.

No surprise then that when I write about money, I do so through a psychological lens. I used to find a lot of finance advice frustrating because it ignored psychology. The books I read seemed to assume that humans are purely rational creatures who make only logical decisions with money. These assumptions didn't match my reality.

This new interpretation of the marshmallow test — that childhood willpower may stem from socioeconomic status — fascinates me. It seems to be an concrete example of how our childhood environment helps to create our mental blueprints. (I believe we each possess mental maps — or “invisible scripts“, if you prefer — that guide our lives. Although I'm primarily concerned with your money blueprint here at GRS, I believe we have mental maps that guide us through many aspects of life.)

Although it's not a popular opinion, I believe there are very real differences between the rich and the poor. There are certain wealthy habits that lead to better odds of success with life and money. But here's the thing: If you're not raised in an environment where these habits are prominent — say you're the victim of systemic poverty and are never exposed to how wealthy people think and act — it becomes much more difficult to learn them.

A couple of months ago, Erynn Brook and Emily Flake published a visual essay at Longreads about the difference between being broke and being poor. The piece is short and interesting — you should read it! — but this passage, in particular, reminds me of the marshmallow test. 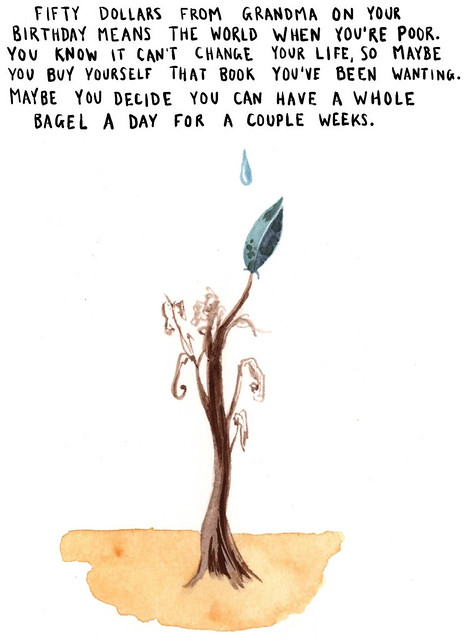 When you live with lack for a long time, it changes how you approach life. If you're a kid whose family has struggled to get by, when you're given a marshmallow, you're going to eat it now. (Can you really trust it'll be there later — let alone that you'll get the second one you've been promised?) If you were poor as a kid, when you manage money as an adult, a scarcity mindset can lead you to do things like immediately spend a windfall instead of saving it for the future.

I think of my own family as an example. My brothers and I grew up poor. Our extended family had always been poor. My parents modeled the best habits they could, but they were limited by their own experiences (and mental blueprints). As a result, I entered adulthood with some faulty invisible scripts.

For instance, my parents taught us that windfalls were to be spent. Although they rarely had much money, when they did come into cash, they spent it. Quickly. And on frivolous things. They never modeled what it was like to save and invest for the future. This is the adult version of failing the marshmallow test.

Naturally, my brothers and I grew up with similar behavior patterns. None of us was poor — and my parents eventually escaped poverty — but we couldn't hold on to our money, either. When we had it, we spent it. We lived paycheck to paycheck despite decent salaries. (My youngest brother eventually lost two homes to foreclosure and had to declare bankruptcy.)

If I had participated in the marshmallow experiment as a four-year-old, I can guarantee I would have eaten the treat as soon as the researcher left the room. I'm nearing age fifty now and I still have to fight this sort of behavior. My scarcity mindset is real and it's damaging — even though I know it's present.

I'm not trying to use my money blueprint as an excuse for my behavior but as an explanation. I acknowledge that I'm responsible for my actions; I just want to know why I choose the actions that I choose.

For more on this subject, check out my article about how to master the abundance mindset (and change your money blueprint).

There are 15 reader responses to "What the marshmallow test can teach us about money".