Last week, with the help of my pal Pete (a.k.a. Mr. Money Mustache), I put on a three-hour Money Boss workshop for 260 enthusiastic attendees of the World Domination Summit here in Portland. We presented our financial philosophy, answered questions, and even talked about how the Money Boss world view differs from Mustachianism. (Pete and I agree on many things — but not on everything.) 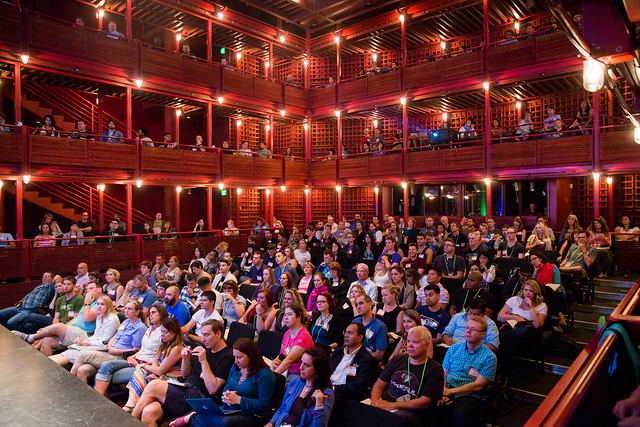 We began by stating a shared belief: You don't want to be rich — you want to be happy.

Each of us does our best to create a life that brings joy and well-being. Money is simply a tool to accomplish this objective. The trouble is, most people aren't clear on what does bring them happiness. They've never taken the time to figure it out. As a result, they seek solace in material possessions. But consumerism actually blocks happiness.

Pete argued that you can achieve greater well-being by pursuing stoicism, voluntary hardship, and baddassity.

I stressed the importance of purpose. What do you want out of life? What's your grand goal in living? This can be as philosophical or as pragmatic as you wish. It's up to you. But without an overall aim, you have nothing to guide you. You don't have anything to help you evaluate decisions — financial or otherwise.

This morning, a friend sent me a quote: “When you don't know how much you need, the answer is always more.”

In the second part of the workshop, we moved from philosophy to practical application. I explained how business profit and personal saving rate describe the same concept. A business needs to earn a profit in order to survive; the same is true at home. If we want to achieve the things that are important to us, we need to earn a profit — and a bigger profit is better.

Pete shared the shockingly simple math behind early retirement. “A millionaire is made ten bucks at a time,” he said. “If you start respecting your tens at age twenty, then you'll be retired by thirty.”

I spent some time analyzing the average American budget:

Pete thinks people should save even more. His wants people to save nearly two-thirds of their income! 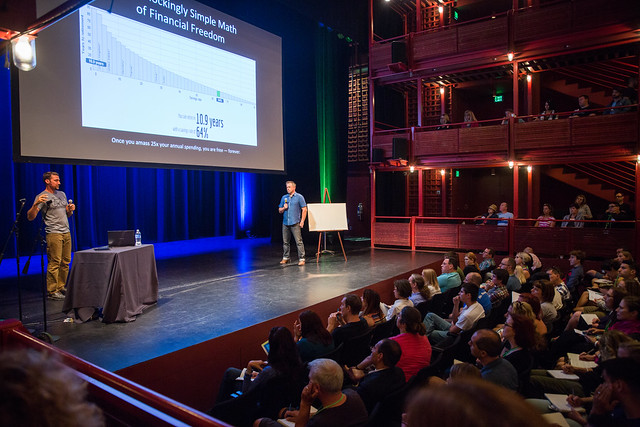 We talked a bit about how it's possible to be financially independent at different levels of spending. His family spends about $24,000 in a normal year. I spend about $36,000. We have a mutual friend who spends $120,000 per year. All three of us are financially independent, meaning that our savings could support us for the rest of our lives.

Pete argued that although our friend might be able to support that level of spending, that doesn't mean he should spend that much. “I prize efficiency,” he said, “and that sort of spending isn't efficient.” Pete also has a not-so-secret environmental agenda that drives his message. He wants people to spend less because it's easier on the Earth. While I think that's a laudable goal, I adhere to the mantra: Do what works for you. Pete's spending is aligned with his purpose, and that's great. That doesn't mean our friend shares the same values and mission, though.

During the workshop, we tried to present a few case studies and examples in order to demonstrate how to make real-world changes. In one instance, Pete analyzed my own behavior to show how an average person can reduce his dependency on cars.

As we were prepping for the workshop, he learned that Kim and I currently drive to the gym instead of riding our bikes. He whipped out his computer to crunch the numbers.

“Google Maps says it takes you sixteen minutes to drive to the gym. Does that sound right?” he asked.

“Actually,” I said, “sometimes it takes longer. If traffic is heavy, then it probably takes twenty minutes. Maybe more.”

Pete frowned. I could tell he wanted to scold me but was holding back. Instead, he looked at a map for the bike commute. “You know it only takes one minute longer to bike the route, right? It's almost nonsensical for you to drive.”

“But, we have a reason!” I protested.

“On Wednesdays, we have to take the dog to obedience training in northwest Portland immediately after the class, so we have to drive.”

“That's Wednesdays,” he said. “And I'm not sure you have to drive even then.”

“And on other days we drive because we don't want to leave the dog home alone with the kittens. She'd eat them. So we take her with us. I get up early to take the dog for a walk, then Kim picks us up in the car.”

Pete shook his head. “That's just an excuse,” he said. “You can make this happen.” He then spent an hour creating a downloadable case study describing how Kim and I could reduce our car dependence. He also created the following slide so that we could explore this scenario during our workshop. 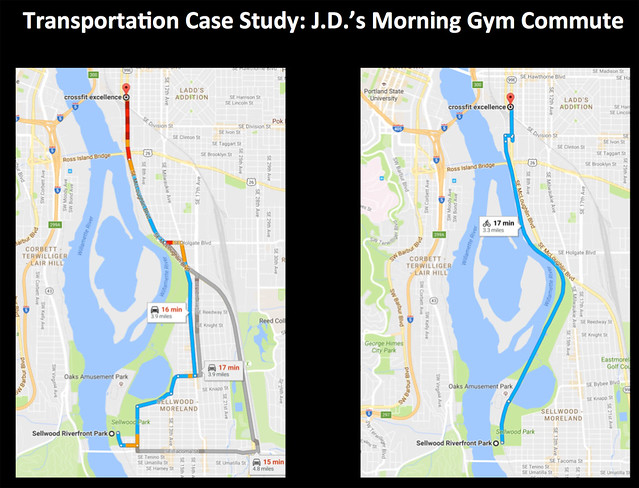 Overall, the first-ever Money Boss workshop was a success. Pete and I enjoyed doing the presentation together, and attendees seemed to enjoy it. Feedback was overwhelmingly positive. Still, I know it wasn't perfect and I've already thought of ways to make future workshops even better.

After our session was over, we made our way to a local brewery where we got a chance to socialize with folks from the conference. Naturally, we biked. And I have proof! A workshop participant snapped this photo of me and Pete weaving our way through rush-hour traffic in downtown Portland. (I took the second photo on our ride back from the brewery.) 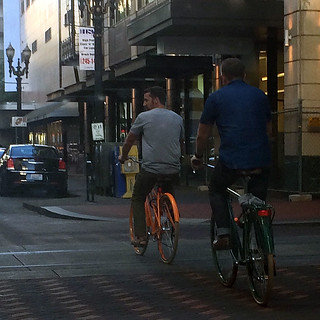 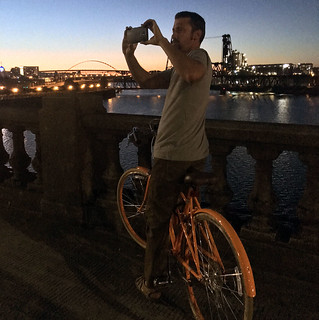 And since the talk, I've been biking like a madman. (Like a Mustachian!) But tomorrow morning? Well, Tahlequah has puppy classes. We'll be driving to the gym.

Note: Here's our slide deck for the Money Boss workshop [in PDF format], and here's an un-edited audio recording from the session [in mp3 format].

There are 15 reader responses to "Highlights from the Money Boss Academy at World Domination Summit 2016".