Stopping the motor of the world 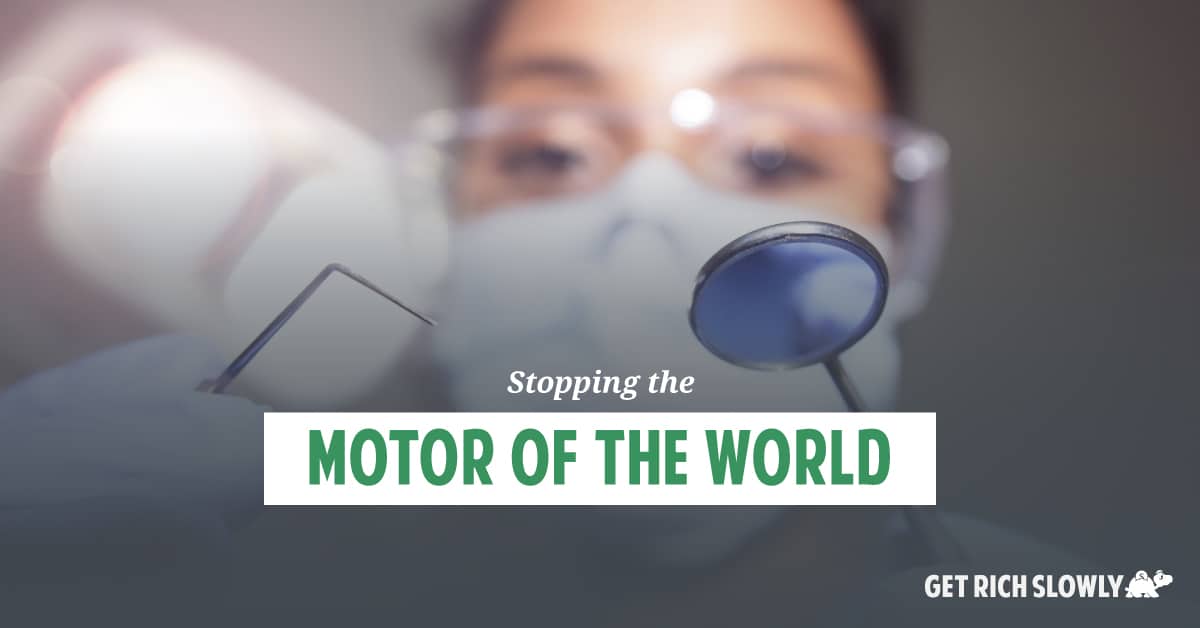 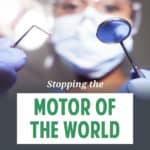 “What a crazy day,” Kim said yesterday after she got home from work.

“Yeah,” she said. “My schedule fell apart, which I figured it would. But I did see three patients in the morning. All three were doctors. Obviously, they thought it was safe to see the dentist. A lot of others stayed home though. Staff too. Meanwhile, people are pissed.”

“Well, it looks like our practice is going to have to shut down for a while. The Oregon Dental Association sent everyone a letter today that explained we're in high-risk professions. They recommended shutting down except for emergency procedures, except for cases that involve pain. So, our office is probably going to close for a while, and that means nobody's going to get paid.”

“That makes sense,” I said.

“It does,” Kim agreed, “but people aren't happy about it. Some of the people in the office need each paycheck. They can't pay their bills if they don't get paid. They think the dentist should keep paying them — out of his own pocket, if necessary.”

Naturally, this will have a ripple effect.

This morning in The New York Times, Neil Irwin calls this the one simple idea that explains why the economy is in great danger. “One person’s spending is another person’s income,” he writes. “That, in a single sentence, is what the $87 trillion global economy is.”

It's as if the global economy is a perpetual motion machine. It's a virtuous cycle. I buy from you. You buy from Jim. Jim buys from Jane. Jane buys from me. In a very real way, money makes the world go round.

When money stops changing hands, the world stops spinning. Markets crash. People panic. It's as if we've stopped the motor of the world.

What If We Lose Our Incomes?

“What would we do if we both lost our incomes?” Kim asked last night as we were getting ready for bed. “What would we cut first?”

I thought about it for a moment. For the most part, we live a comfortable but frugal existence. Most of our indulgences are obvious. Many are annual expenses. I don't feel like there's a lot left to be cut from day-to-day life. Besides, I don't really have an income right now. Any revenue generated by this site (which isn't much at the moment) simply gets pumped back into the business.

“Come on,” Kim said. “I'm serious. What would we cut? Restaurants?”

“Sure,” I said. “But we've already cut back on restaurant spending quite a bit this year. And now we won't be eating out for at least a month.” Yesterday, the governor of Oregon ordered that all restaurants and bars to close for the next four weeks.

“Seriously,” I said, “I think that if we had to cut costs, I'd start with our big annual purchases like Portland Timbers tickets. Or our Broadway shows.”

“Oh, I forgot about those,” Kim said. “Those are good cuts. Those are luxuries.”

“Yes they are,” I said. “So are the restaurants. So are our subscription TV services. Plus, don't forget that we're spending much less on alcohol this year. Alcohol is definitely something we could cut completely. That'd probably improve our quality of life rather than hurting it.”

As I was falling asleep, I got to thinking. If I were to cut expenses to bare bones, what would that look like? How bare bones is “bare bones”?

I don't know precisely what my “squeak by” number is. I spent $3212.24 in January this year (and something similar last month), but that included restaurant dining and some entertainment. I'm certain that I could get by on less than $2500 per month — possible less than $2000.

Yesterday after work, Kim started her personal process of cutting back. She called to cancel her therapy appointment. She cancelled an upcoming massage. She and some girlfriends have a getaway weekend planned for the end of April; they haven't decided what to do about that. Today after work, she'll see if there are other things she can cut.

Kim and I are fortunate. We have cash reserves. Many Americans aren't in this position. They're in for a rough few weeks. Or months. Or years.

According to the Federal Reserve's annual Report on the Economic Well-Being of U.S. Households:

Yesterday, for the first time, my Facebook feed contained posts from people worried about how they're going to make ends meet. Meanwhile, I'm concerned for friends who aren't taking this seriously.

When you post photos of how you're out partying with a large group until two in the morning, you scare me. It's great that you're not afraid of the coronavirus — so brave! /s — but you're not just putting your own health at risk. You're putting the health of others at risk. And more relevant to this blog, you're putting your financial livelihood at risk.

Look into the future. Forget about the health factor for a moment. Focus only on finances. If things stop for a month or two or three, can you get by? Forget about whether this situation is rational or if it's panic. Accept it as the reality we are going to face, regardless whether you think it's a justified response. Based on what you see, does it make any sense at all to continue spending as if everything is normal?

The next few weeks (and months) are going to be rough. Financially, we (as a society) aren't prepared for the world to stop spinning. We don't have a contingency plan for when everything comes to a halt.

Sure, many individuals are prepared. I'm willing to wager that most GRS readers have substantial emergency savings, for instance, and that many of us have built lifestyles that don't cost much to maintain.

But we, as a group, aren't typical. We're not normal.

More typical is my good friend who quit her job in January. Because she reads GRS, she's built some savings (and invests for retirement). But she quit without having another job lined up. Then she took a vacation to Mexico. All of this sounded fine (and fun) at the time, but now I worry for her.

Her plan was to look for work when she got home. Now she's home, but what work is she going to find? How long will her savings last? How long til she has to dip into that retirement account to pay her bills?

Then there are Kim's co-workers. Some are desperate because they cannot miss a single paycheck. Doing so will send them into a personal financial crisis.

I have high hopes that the coronavirus situation will make it very clear to Americans just how important it is to be prepared for problems. In normal life, it's easy to put off saving, especially if you're young and healthy. “It won't happen to me,” people think, and they buy big homes and new cars and upgrade their smartphones. Most of the time, it doesn't happen to them, so they're able to skate by. Whew!

But when the entire world stops spinning? When everyone takes a hit at once? Well, that's trouble. You can't say, “It won't happen to me” when it's happening to everybody at the same time.

Only time will tell the lasting impact of this crisis on the world economy — and your personal economy. I think one thing is certain. When this all blows over, a lot of folks will want (and need) to get back to basics. If you're one of these, here are a few articles from the GRS archives that you might find useful.

For now, I hope that you and your family are doing well. Remember to get your coronavirus info from reliable medical sources (such as the Centers for Disease Control and Prevention or the World Health Organization). Don't trust what you read on Facebook, even if you believe the advice is well-meaning. Most of all, keep an eye on your friends and neighbors. Let's practice caremongering rather than scaremongering!

Is an annuity a good investment?

How to get started investing

Eating healthy on a slim budget

As featured in:
85 shares