Nine lessons in wealth-building from The Millionaire Next Door

Want to become a millionaire? Then perhaps you should start by studying the behaviors of people who have done it. Check out the lists of the best financial books of all time, and you're bound to find several that include The Millionaire Next Door: Surprising Secrets of America's Wealthy. 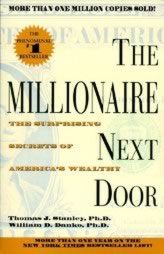 Written in 1996 by marketing professors William Danko and Thomas Stanley, its main premise is that people who look rich may not actually be rich; they overspend — often on symbols of wealth — but actually have modest portfolios and, sometimes, big debts. On the other hand, actual millionaires tend to live in middle-income neighborhoods, drive economical cars, wear simple watches, and buy suits off the rack.

You've likely heard of the book. You may be familiar with the premise. Perhaps you even read it way back when. But if you read it again — as I recently have — you'll be reminded of some of true gems of wisdom Danko and Stanley gleaned from their thousands of surveys of millionaires.

Related >>The Millionaire Next Door: Surprising Secrets of America's Wealthy

To give you a taste, this post will highlight some of the timeless — along with the lesser-known — lessons of The Millionaire Next Door as well as Stanley's 2009 book, Stop Acting Rich…and Start Living Like a Real Millionaire. (A future post will feature my interview with Dr. Stanley.)

Lesson #1: Income Does Not Equal Wealth

Yes, higher-income households tend to have more wealth than lower- and middle-income households. But the size of a paycheck explains only approximately 30% of the variation of wealth among households. What really matters is how much of the income is invested. On average, millionaires invest nearly 20% of their income.

Danko and Stanley offer a formula for determining whether you have a net worth that is commensurate with your income:

Multiply your age times your realized pretax annual household income from all sources except inheritances. Divide by 10. This, less any inherited wealth, is what your net worth should be.

The authors rightly call it a “simple rule of thumb”; a more thorough analysis would look at lifetime income, not just the most recent year. Plus, it strikes me that it's more accurate for people who are at least a couple of decades into their careers. It's not realistic, for example, to think a 25-year-old who makes $30,000 would have accumulated $75,000 (25 x 30,000 Ã· 10). However, for those in their mid-40s and later to meet this metric, they would have needed to save 10% to 15% of their incomes throughout their careers, or started later but saved 20% to 25% of their incomes. That's not common, but also not impossible.

The majority of millionaires have a budget. Of those who don't, they have what the authors called “an artificial economic environment of scarcity,” more commonly known as “pay yourself first.” In other words, they invest a good chunk of their income before they can spend any of it.

As for those who do budget and plan out their expenses for the coming year, no, they don't enjoy it any more than the rest of us. But they appreciate the “payoff,” as well as fear the consequences of not doing it. As the authors wrote, “It's much easier to budget if you visualize the long-term benefits of this task.”

Related >> How to save: Putting “pay yourself first” into practice

Similar to the previous point, almost two-thirds of millionaires can answer “yes” to this question: “Do you know how much your family spends each year for food, clothing, and shelter?” In contrast, only 35% of high-income non-millionaires answered yes to this question. Millionaires are more likely to track their spending.

Lesson #4: Know Where You Want Your Dough to Go

Another two-thirds of millionaires answered in the affirmative to this question: “Do you have a clearly defined set of daily, weekly, monthly, annual, and lifetime goals?” One example: a woman who wants to have $5 million by the age of 65, at which point she'll retire. At the time of the book's publication, she had already reached millionaire status — on an annual income of $90,000. As for those who answered “no” to the question, many of them are retired and have already reached their goal of financial independence.

You don't have to earn a big six-figure salary for planning to pay off. In a survey of 854 middle-income workers, Danko and Stanley found “a strong positive correlation” between investment planning and wealth accumulation. This extra planning doesn't just happen. According to the authors, “Most PAWs have a regimented planning schedule. Each week, each month, each year, they plan their investments.”

Lesson #6: Love the Home You're With

Your choice of home — and how often you choose a new one — will determine your ability to accumulate wealth. According to The Millionaire Next Door, that wealthy family has been next door for quite a while. Half of millionaires have lived in the same house for more than 20 years.

In Stop Acting Rich, Thomas Stanley digs deeper into how your address affects your spending, writing:

Nothing has a greater impact on your wealth and your consumption than your choices of house and neighborhood. If you live in a high-price home in an exclusive community, you will spend more than you should and your ability to save and build wealth will be compromised…. [P]eople who live in million-dollar homes are not millionaires. They may be high-income producers but, by trying to emulate glittering rich millionaires, they are living a treadmill existence.

He cites several statistics to back this up, including:

If you're looking to buy a home, Stanley provides this advice: “The market value of the home you purchase should be less than three times your household's total annual realized income.

Lesson #7: Love the Spouse You're With

The majority of wealthy people are married and stay married to the same person. Of course, marriage shouldn't be just about money. We're sure that 24-year-old Crystal Harris has other reasons for being engaged to 84-year-old Hugh Hefner; perhaps she loves his pipe. But several studies have shown that people who are married accumulate more wealth than those who are single or divorced.

However, it's important to marry someone with the right financial habits. In the majority of millionaire households studied by Danko and Stanley, the husband is the main breadwinner and tends to be frugal, but the wife is even more frugal. As they wrote, “A couple cannot accumulate wealth if one of its members is a hyperconsumer.”

Lesson #8: Don't Drive Away Your Wealth

The majority of millionaires own their cars, rather than lease. Approximately a quarter have a current-year model, but another quarter drive a car that is four years old or older. More than a third tend to buy used vehicles. What is the most popular car maker among millionaires, according to Stop Acting Rich? Toyota.

So who's driving all those BMWs and Mercedes-es? Not millionaires. Eighty-six percent of “prestige/luxury” cars are bought by non-millionaires. In fact, Stanley writes that “one in three people who traded in their old car for a new one were upside down and owed more on the trade-in than its market value.” It's tough to get wealthy doing stuff like that.

Lesson #9: The Rich Are Different — They're Happier

At this point, you might be wondering whether all this living below your means is worth it. Sure, millionaires having bigger portfolios — but are they happier? Danko and Stanley's research indicates that they are. According to their research, “Financially independent people are happier than those in their same income/age cohort who are not financially secure.”

First of all, PAWs worry less than UAWs. There's a peace of mind that comes from living below your means and having money in the bank. But they also don't expect “status” purchases to improve their happiness, because evidence shows it doesn't happen. Among the people surveyed, those who drive a BMW and wear a Rolex are not happier than those who drive a Honda and wear a Timex.

The Double-sided Benefits of Living Below Your Means

After reading these books, it occurred to me that there are actually two benefits of learning to live on much less than your paycheck.

Permit me to demonstrate.

Thus, when it comes to retirement planning, adopting the lifestyle of the “millionaire next door” means you can save more toward a lower-priced goal. That's a formula that can help even non-millionaires achieve their retirement goals.

The pros and cons of Personal Capital

What happens when you try to get rich quickly

The pink tax: The hidden cost of being female