I met an old friend for lunch the other day. Andrew and I have known each other since the first day of first grade — way back in 1975. “You know,” he said as we slurped down Asian noodles, “when I first reconnected with you fifteen years ago, you were pretty much the same guy you were in high school. Even five years ago, you were still that same J.D. But now you're different — in a good way. It's like you've finally grown up. What happened?”

I didn't have a good answer at the time, but I do now. What happened? I stopped being afraid of life. I decided to take charge of my own destiny instead of waiting for it to arrive. I found ways to be confident in the face of fear. In short, I learned to thrive on uncertainty.

“You gain strength, courage, and confidence by every experience in which you really stop to look fear in the face…You must do the thing you think you cannot do.” — Eleanor Roosevelt

Turning fear and doubt into brilliance 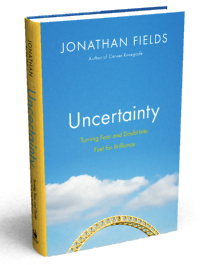 My colleague Jonathan Fields has a new book out that addresses this very subject. Uncertainty: Turning Fear and Doubt into Fuel for Brilliance is all about finding ways to face our fears and move beyond them, to let them make us more creative and productive. It may sound hokey, but it's not. I think the concept is brilliant.

Fields says that anything certain has already been done. To innovate, we have to embrace the unknown, but doing so takes a psychic toll.

Uncertainty is often nothing more than fear of judgment. Fields cites research that demonstrates people are less willing to take risks when they think they're going to be judged. But if you remove the possibility of evaluation, this aversion vanishes. Here's how he explains the research:

In reality, we may not be as hardwired to avoid uncertainty as we are hardwired to avoid wanting to be judged for taking the less-mainstream path and coming up empty. Fear of judgment stifles our ability to embrace uncertainty and as part of that process delivers a serious blow to our willingness to create anything that hasn't already been done and validated.

We're afraid that to try something new because we don't want to be criticized, and we don't want to fail. But nothing great is accomplished without taking risks. Uncertainty, the book, explores methods for circumventing our fear of judgment and failure.

Uncertainty isn't meant for everyone who reads Get Rich Slowly. In fact, I suspect that only a small subset of readers would find it useful. Its thesis is applicable to nearly everyone, but most of the examples are related to entrepreneurs and creative professionals. These folks should certainly give it a look. (And if you're curious about the book, by all means borrow it from the public library.)

For me, though, Uncertainty arrived in the mailbox at the perfect time. Every year or so, I need a shot in the arm to remind me how and why I've managed to create the life I enjoy today. It's not wholly by chance, but it's not because I'm better than anyone else. The real reason? I'm where I am now because I've learned to confront uncertainty instead of avoiding it.

“Do the thing you fear and keep on doing it…That is the quickest and surest way yet discovered to conquer fear.” — Dale Carnegie

Flaunt the imperfection
How does this relate to personal finance?

We're constantly making decisions with imperfect information. How often do you ask yourself questions like these:

There's no way to know the “best” answer to these questions (though, of course, in some cases the choices are clearer than others). The future is uncertain. And because of uncertainty, we second-guess ourselves, we question our financial futures.

One classic example — mentioned over and over in the comments of this blog — is saving for retirement. How much should you save? When should you start to save? To what extent should you put off enjoying today since tomorrow may never come? We don't know, and we can't know. Until somebody invents the “See the Day You Die!” machine, our decisions about retirement will be made with imperfect information.

Plus there's the paradox of choice. When we have only three options, it's easy to decide. But when we have thirty, it's tough. We're afraid we might make the wrong decision. Or a less perfect one.

Really, though, overcoming uncertainty — building confidence and destroying fear — is less a personal finance issue and more a personal development issue. (This stuff is all inter-related, though. If you improve your emotional and psychological well-being, you will improve your financial situation.) Overcoming uncertainty is about taking calculated risks in all all areas of your life — including your finances.

Further readingLong-time readers know that this is a recurring subject at Get Rich Slowly. In fact, these are some of my favorite articles:

If I could have new visitors read just three article, it'd probably be these.

Daring to Fail
Here's a secret: Everyone is afraid of the unknown. If you're willing to act despite uncertainty, then you're already ahead of 95% of the population. Most of those who are scared to act won't condemn you, and most of those who also act won't be critical either. In fact, from my experience, they'll probably be supportive.

It's true you'll have some critics, but even that isn't a bad thing. If a critic gives you constructive, useful feedback, she's doing you a favor. And if a critic is mean-spirited or shallow, that doesn't reflect poorly on you — it reflects poorly on him.

Take risks. Embrace uncertainty. Dare to fail. Your life will be better for it.

Survival Techniques for the Barely Insured

Get kitchen gadgets for less at the local restaurant supply store