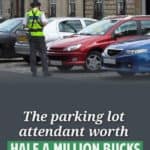 In this week's installment of Get Rich Slowly Theater, we're going to look at a real-life money boss: Earl Crawley, a parking attendant from Baltimore. Mr. Earl (as he's known) was profiled on the PBS show MoneyTrack. Here's a six-minute segment about this super saver:

Mr. Earl has worked as a parking attendant for 44 years — at the same parking lot! He's never made more than $12 per hour. He's never earned more than $20,000 in a year, yet he has a net worth over half a million dollars.

Like many successful folks, Earl started working when he was young. At age 13, he got a job at a produce market to help pay the family bills. His mother took most of his income to help make ends meet, leaving her son with just a few cents out of every dollar. This forced saving plan was the start of a life-long habit.

Mr. Earl says he was a slow learner. He wasn't very good in school. He had dyslexia, so reading was a struggle. Growing up in the 1950s, there weren't a lot of opportunities for people in situations like his. He knew he was destined for a lifetime of low-wage jobs, so he decided he'd better save what little he earned.

He and his wife raised three children — and sent them to Catholic school instead of public school — despite their meager budget. (Mr. Earl took extra jobs in order to pay tuition.) Meanwhile, he started investing.

Mr. Earl's investing habit started small. At first, he put his money into savings stamps and savings bonds. He saved what might have seemed like meaningless amounts to other people, starting with pennies and moving up to dollars. For fifteen years, he invested $25 each month into a mutual fund. His balance grew. By the end of the 1970s, his net worth was $25,000.

Eventually, Mr. Earl decided he wanted to “play the stock market” himself. He began buying shares in Blue Chip companies like IBM and Caterpillar and Coca-Cola. He bought just a share or two at a time, but that was enough. (His first purchase was a single share of IBM in 1981.) His secret?

“Instead of taking the dividends and pocketing it, I let it set — or let it reinvest itself — and increase my shares. The more shares I had, the more dividends I had. And eventually, the more money I had down the road.”

Like any good money boss, Earl built a wealth snowball.

How did Earl become so savvy with money? It's not just because of habits he developed when he was young. You see, his parking lot is in the middle of a financial district. Over time, he picked the brains of the folks who passed his way. He picked up tips on how to save and invest.

“I talked to everybody and listened to the advice everybody gave me,” he says. Because he had trouble reading, he made a point of listening.

Mr. Earl is a prime example of a money boss. He made the most of the cards life dealt him. He found a way to turn a losing hand into a winner. And now he's paying it forward, teaching others how to save and invest.

The dude is awesome.

For more about Mr. Earl, check out this short interview at Kiplinger.

There are 10 reader responses to "The parking lot attendant worth half a million bucks".