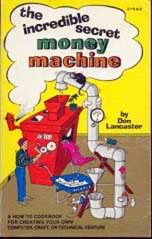 Passive income, as the term implies, is money you earn on a regular basis with little or no effort required to maintain the cash flow after the income stream has begun.

Common examples of passive income include rental properties, royalties from books (and other published work), and profitable businesses that you own but in which you have little (or no) active involvement.

My interest in passive income started early in life. When I was a boy, my father was drawn to the promise of easy money. (See? This is another example of how we inherit our money blueprints from our parents.) Dad was a serial entrepreneur, as I've mentioned before, but he was also drawn to multi-level marketing schemes.

Multi-level marketing schemes lure victims participants with the dream of big bucks for minimal effort. Sure, you have to set up your own operation by recruiting customers and a stable of salespeople, but once you do — so the story goes — you can sit back and relax as the money pours in!

Like my father, I too was drawn to these schemes when I was younger. My first job out of college, for instance, was a multi-level marketing scheme disguised as an insurance company. On a daily basis, the job entailed going door to door trying to sell hospitalization insurance (that was essentially worthless), but the folks who really made money did so because they recruited salespeople who worked under them. The top managers made plenty of passive income because of the pyramid nature of the program.

That said, passive income is not inherently slimy. In fact, it's a terrific concept worth your attention.

Note: My favorite legit book about passive income is The Incredible Secret Money Machine by Don Lancaster. (Here's my review.) My dad bought a copy of this book when it came out in 1978, and I read it several times as a kid. (I still have Dad's old copy — signed by Mr. Lancaster himself!) If you're at all interested in legitimate sources of passive income, you should read the updated version of this book, which is available for free at the author's website.

The Power of Passive Income

The truth is that if you can create “multiple streams of income” that operate without effort on your part, these streams can be terrific supplements to your regular job. Actually, the crossover point, an integral part of Financial Independence theory derived from the classic book Your Money or Your Life, is built around passive income:

The Crossover Point provides us with our final definition of Financial Independence. At the Crossover Point, where monthly investment income exceeds your monthly expenses, you will be financially independent in the traditional sense of that term. You will have passive income from a source other than a job.

At the moment, I currently enjoy several small sources of passive income:

In the past, I've also received passive income through other sources such as business loans. (I loaned money to my family's box factory, for example, so the company could purchase a piece of machinery. The interest on that loan was passive income.)

There are folks who are under the impression that Get Rich Slowly itself is a source of passive income. Hahaha. Nope. Not even close.

For one thing, there's nothing passive about running this site. It's a full-time job, especially if I want it to be good. Plus, while Get Rich Slowly is generating revenue right now, it's operating at a loss and not a profit. (So, I guess you could say that GRS is a source of “active expense” rather than “passive income”. Ha.)

What is Passion Income?

During my short summer break last week, I took a morning drive to visit some friends. Jillian and Adam from Montana Money Adventures were passing through Portland during their 10-week “mini retirement“. I spent a couple of hours eating breakfast with them and their five kids.

Jillian was amused at how she kept burning the pancakes. (“This isn't my usual pancake batter. I'm used to Krusteaz,” she said. So am I.)

After breakfast, Adam took their troop for a hike. Jillian and I sat by the campfire and recorded a video that she'll use sometime in the future at her website. We chatted about travel (or course) and blogging (of course) and early retirement (of course). But then Jillian steered the conversation in an interesting direction.

We were talking about how retirement isn't always what people expect it to be, whether they retire early or not. A lot of folks quit their jobs to find that they're life is without purpose, that they're bored.

“That's why I encourage my readers and clients to pursue passion income,” Jillian said.

“Passion income? Do you mean passive income?” I asked.

The Power of Passion Income

I said good-bye to Jillian and her family, then headed home. But along the drive, I continued to think about the notion of passion income. It's an idea that I've espoused for a while but never had a term for it. When I got back to the house, I dug through the archives at Montana Money Adventures to read more about the concept.

So far, Jillian has three articles about passion income:

Jillian says that passion income is derived from things that (a) are in your natural skill set or match your core competency, (b) you love the outcome and feel like you're making a difference, and (c) give space for other important things in your life.

She's created the following Venn diagram to show what she means:

While neither Jillian nor I would argue that you should “do what you love and the money will follow”, I think we both agree that in an ideal world you'd make money by doing something you enjoy. This might be difficult if you're currently in the middle of a specific career trajectory, but it's much easier after you've retired.

After you've left the traditional workplace, you have the freedom to make choices more aligned with your self and your vision. Pursuing passion income — whether it's through art, a hobby, or work in your community — can be an excellent way to take pressure off your retirement savings while also giving yourself a sense of purpose.

Thinking about it, that's really why I bought back Get Rich Slowly. My hope is that this blog will be a source of passion income (not passive income). And once I get the monetization thing figured out, I think it will be.

The great thing, Jillian says, is that you can pursue both passive income and passion income.

That might mean doing something — painting, writing a book — that fits in both categories. Your work might fit in that passion income sweet spot, but then produce residual passive income in the future.

Or, that might mean pursuing multiple sources of income, some out of passion and some that are passive. (She points out that “the happiest retirees average eight streams of income”. I'm not sure the source of that stat, but it's interesting. And it makes sense. When you have diverse income sources, there's less risk to you if one of them dries up.)

Why even worry about passive income and passion income? Recently, I wrote about the struggle some people face to figure out how much to spend in retirement. While some people overspend, there's a sizable population that underspends. They're afraid to touch their nest egg.

Passion income alleviates the pain of spending. You get to work at something you love while also earning some money. And spending this money isn't painful, unlike spending out of your investment accounts.

Another benefit of passion income? If you're able to generate ongoing revenue with work that you love — whether it's part time or full time — you're able to quit your career much sooner than you would on a traditional early retirement path. If you can earn $1000 per month by building picnic tables, for example, that's $300,000 less you need to save for retirement (given standard assumptions).

As I near fifty, I'm still intrigued by the idea of passive income. I probably always will be. But the older I get, the more vocal I am that people should consider creating sources of passion income. Finding a way to earn even a little bit of money by doing something you love can not only be fun, but it can also help you reach retirement sooner — or make your current retirement less stressful.

Employee or entrepreneur? The pros and cons of self-employment