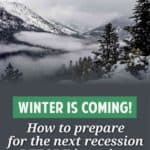 I was reminded of this advice again this morning as I read several articles in a row about the insane rise of Bitcoin and the current bull market in stocks, which is one of the longest in U.S. history.

Here's a graph of the value of Bitcoin:

And, just for kicks, here's a graph of the U.S. unemployment rate (in this graph, lower numbers are better): 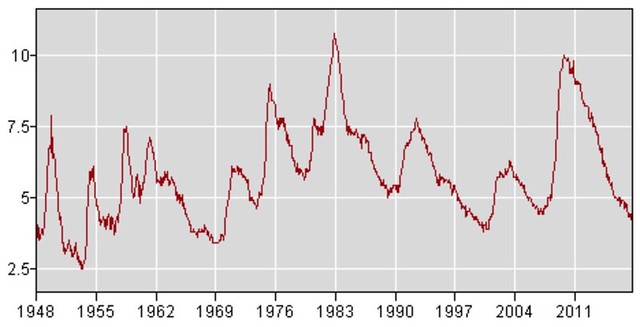 You can look at just about any economic indicator over the past decade and produce similar graphs. Despite what certain incessant whiners say, we've experienced a period of sustained wealth and prosperity. That's awesome!

If you've spent all (or most) of your adult life in this economy, you might believe it's always like this. You might believe the stock market always goes up, jobs are always easy to find, and every day is sunny.

My friend William Cowie likes to use a metaphor when describing the U.S. economy. He says our economic cycles are like the four seasons.

The key insight which will help you benefit from any given economic cycle is understanding that every complete cycle, bottom to bottom, has four phases, which I liken to the four seasons of a year: The spring of the early recovery, the summer of growth (everyone's favorite season), the fall season of harvest, and the winter of recession.

Here's a graph he uses to visualize the four seasons of the economy: 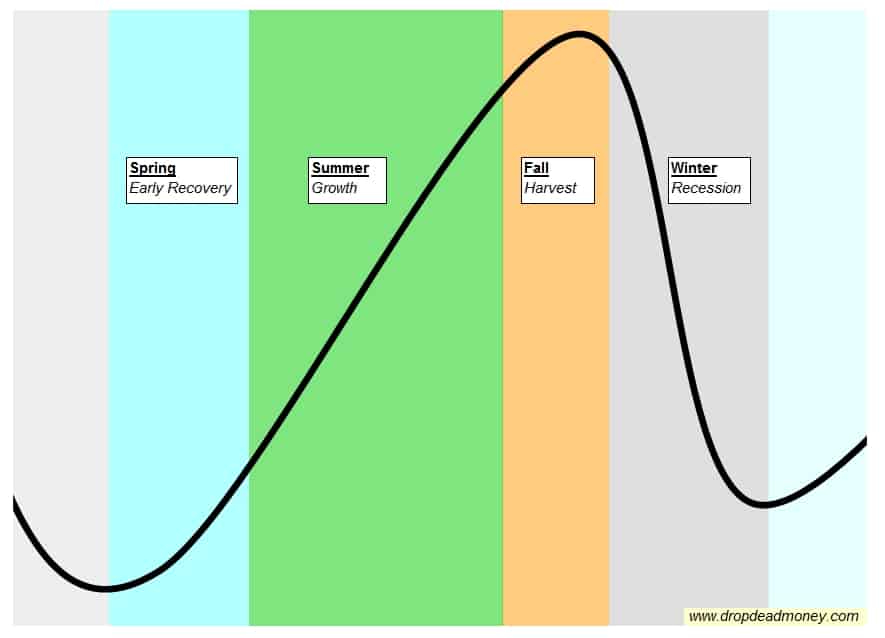 If we use past history as a guide — and again, we have nothing better to go on — where do you think we are in this cycle? We know we're not in winter because things are too good. Are we in spring? Absolutely not. Are we still in summer? Maybe — but probably not. If we are, we're in late summer. Odds are we're in the autumn of the economic cycle, the time for “harvesting” our gains.

But here's the thing: After the wild growth of summer, after the markets have shown sustained gains and unemployment is down, and prosperity is all around, that's when most people start to feel safe. They breathe a sigh of relief. They let down their guard. They start to take risks they wouldn't otherwise take. They pile on the already hot markets — buying high (then selling low in winter).

Not me. It's at times like this that I get nervous.

Warren Buffett famously said: “Be fearful when others are greedy and greedy only when others are fearful.” Based on my reading this morning, people have become greedy. And that makes me fearful.

Re-reading what I've written so far, I sound like Ned Stark from Game of Thrones. His family's motto is “winter is coming”. Because they live in the far north of their fictional country, the Starks strive constantly to be prepared for the cold and the dark. I guess that's what I'm advocating too. 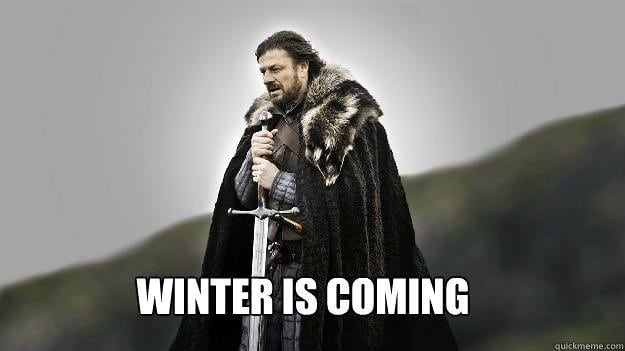 I'm generally an optimistic guy, but my optimism is tempered with pragmatism. As my pal Jim Collins says, market crashes are to be expected. “What happened in 2008 was not something unheard,” he says. “It has happened before and it will happen again. And again.”

Toughen up and learn to ignore the noise, stay the course and ride out the storm…To do this, you need to know these bad things are coming. They will happen. They will hurt. But like blizzards in winter they should never be a surprise. And, unless you panic they won’t matter.

If winter is coming, what can you do to prepare? Here are some actions I recommend:

Basically, there are two keys to preparing for a recession: Beef up your cash reserves while reducing your ongoing expenses. All my specific recommendations support these two actions.

Based on this core concept, you can make appropriate adjustments for particular situation. You might, for instance, think twice before buying a home. It can be risky to buy a bigger home (and take on a bigger house payment) heading into an economic downturn. Your expenses go up just as your ability to pay takes on greater risk.

Now, I want to be clear: There's no way to know for sure that we're headed for dark days in the economy. Maybe things will stay rosy for another five or ten years. If so, awesome! If that's the case, then having made preparations for a downturn won't hurt you at all. (In fact, they'll put you in a position to make more money during flush times.)

But history tells us that bad times always come — and they tend to follow predictable cycles. Nobody can know for sure when the next economic winter will arrive, but one thing is for sure: Winter is coming. And you want to be ready when it arrives.

J.D…..timely article as always. I too have a sense of unease and have been doing a little timely harvesting, though if I were a gambler (I’m so not), I’d lay money that we have a little more exuberance and run-up to go before the precipice. Deductions are on my mind too….I threw a bunch into Vanguard Charitable DAF for 2017. On top of that, my tax accountant emailed me this morning to encourage me to pre-pay estimates, real-estate taxes, etc. for deductions this year; who knows what will end up being in the final tax bill, so better have a… Read more »

Good grief, we learned about seasons in the economy way back in 1979.

Haha. I always forget about that movie. Maybe I should use that clip in a future post.

This is one reason we’ve gone all-out on debt repayment in recent months. You never know what the future will hold. If (well, when) times get tough in the future, I want to deploy our money for things like living expenses – not credit card bills. Debt be gone! At the same time, we’re working hard to stock up our emergency fund.

This is one of the reasons we have tried to pay off debt,

Student loans will be done in either Feb or March. CC bill is for monthly expenses and gets paid off every month (love the rewards that we get)

Car has 1 more year until paid off.

Another way to prepare is to start a side hustle. The worst case scenario is the double whammy of a job loss and market crash together. A profitable side gig can help mitigate this type of loss.

Is it weird that I get excited when someone talks about an upcoming market crash?

But it’s true, in 2018 my plan is to buy, since there are forecasts of both a real estate (in Canada) and stock recession. Time to stock up on cash so the buying frenzy can begin!

Great points to remember when the memories of recession have grown so distant! Especially asset allocation- it seems that dividend stocks are being treated as the new bonds!

Agreed. I keep expecting another recession a la 2008.

(Well, bright side for ME. Not so much for the potential readers.)

A wonderfully refreshing article, thank you.

There’s certainly no harm in preparing for the worst, and this is something that I hear a lot on the InvestTalk podcast with Steve Peasley.

I especially like your reference to investors who may have only been in the game during the most recent bull market.

For this reason, those of you who are seasoned investors will no doubt see some bargains during the next downturn.