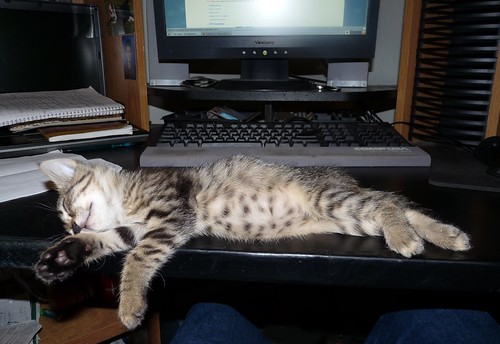 I've discovered that one of the biggest benefits to being a full-time freelancer can be one of its drawbacks: setting ones own schedule. Don't get me wrong, it's the reason I wanted to get into freelancing in the first place, but I keep wondering if I'm working enough. Am I getting enough done in a day? How often should I take a break, and for how long?

It sounds like a minor consideration, but breaks during the day can have a positive effect on productivity.

Work like Leonardo
In many work environments, there's an expectation that working longer and harder equals greater productivity. Whether explicit or implicit, the employee who works through lunch, evening hours, and weekends is often perceived to be more productive than an employee who takes regular breaks and works more reasonable hours.

But rewarding the nose-to-the-grindstone mentality results in bad judgment calls, mistakes in execution, less creativity, and more aversion to risk. Jim Loehr and Tony Schwartz write about the importance of mental recovery in their New York Times Bestseller, The Power of Full Engagement:

The key to mental recovery is to give the conscious, thinking mind intermittent rest. In his provocative book, How to Think Like Leonardo da Vinci, author Michael Gelb poses a wonderfully revealing question, “Where are you when you get your best ideas?” Gelb has asked this question to thousands of people over the years, and the most common answer he gets include ‘in the shower,' ‘resting in bed,' ‘walking in nature,' and ‘listening to music.' We ask our own clients a similar question and their answers have ranged from taking a jog to meditating to dreaming to sitting on the beach. ‘Almost no one,' Gelb writes, ‘claims to get their best ideas at work.'

Gelb also notes that as prolific a scientist, inventor, and artist Leonardo da Vinci was, he took regular breaks and naps, even to the frustration of his employers. Da Vinci wrote, “It is a very good plan every now and then to go away and have a little relaxation…When you come back to the work, your judgment will be surer, since to remain constantly at work will cause you to lose the power of judgment.”

Power napping around the world
In some countries, the afternoon siesta is part of a normal workday. Greece, Italy, and Spain incorporate the lunchtime nap, and have lower incidents of heart disease. A study by the University of Athens showed that working men who took a nap during the day had a 64% lower risk of dying from heart disease.

Long working hours and high stress levels in Japan have led to the creation of a new official cause of death — karÅshi, or “death from overwork.” In response, some Japanese companies have started to limit overtime hours and bring the power nap into corporate culture. In fact, an an employee's dedication to their job is often judged by the frequency in which they engage in inemuri, or “sleeping while present.”

Coming to America?
At the average American company, it's socially unacceptable to take a nap during the day. (Though it is okay to fuel up on coffee and Red Bull, which is nowhere near as effective in revving up after the afternoon dip in energy.) But that's starting to change.

Snoozing in the middle of the workday was once seen as lazy, but more and more companies are realizing that naps increase productivity, thanks to studies like NASA's that showed that a nap of just 26 minutes can boost performance by 34%. Napping rooms have started to pop up in the U.S., from small companies like Yarde Metals in Pelham, New Hampshire to giants like Nike. U.S. trucking and rail industries have napping policies, and many hospitals are starting to look into it. Procter & Gamble, Cisco, Stanford Medical Center, Carnegie Mellon, and the Jetsetter Spa at Miami International Airport have installed EnergyPods, napping chairs with noise-canceling headphones and gentle wake-up calls.

How you can recharge
If your employer has yet to embrace corporate napping, you could still get some shut-eye if you have an office (with a door) or live near work. Sleep scientist Sara Mednick and author of Take a Nap! Change Your Life, recommends a 20-minute nap sometime between 1 p.m. and 3 p.m., right after lunch. Any more than that, and you might have a hard time getting back to work.

If a nap is out of the question given your schedule or work environment, Loehr and Schwartz recommend taking recovery breaks during the day. Walk outside for some fresh air, chat up a coworker about something not related to work, or eat your lunch at a nearby park.

As for this type-A personality, I'm starting to build breaks into my schedule every two hours to recharge and avoid burnout. Leonardo da Vinci would approve.

J.D.'s note: This is a great message, but one I have a tough time adopting in my own life. I know that I get my best ideas — those sudden bursts of creative insight — when I'm exercising or working in the yard. I can point to dozens of examples. Yet when I feel like I absolutely must get work done, I cloister myself in my office, where I often can't get anything done at all. That's one reason I try to make myself walk to lunch a couple of times per week.

There are 35 reader responses to "Productivity Lagging? Take a Siesta".