This is a guest post from Claire Brown. Previously at GRS, Claire shared a reader story about how she learned about frugality from de-cluttering.

As we hit the season of Christmas parties and New Year bashes, many GRS readers are probably thinking about 2012 financial resolutions, budget gifts and how to whip up a frugal feast for 25th of December. Some of you may also be fearing that annual call from a family member in financial trouble, or dreading watching nieces and nephews unwrap gifts you know their parents can't afford. But some people may have a dirty little financial secret that's even closer to home. 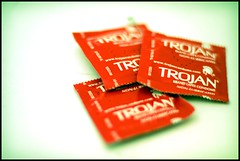 Sexually-transmitted debt (or relationship debt) is debt you “catch” from your boyfriend, girlfriend, partner, or spouse by:

There are a variety of reasons people end up with relationship debt:

How can you keep yourself protected from sexually-transmitted debt? Here are few suggestions:

If things do go badly, you'll need to take action when a relationship ends, such as closing joint bank accounts and credit facilities. Move your income into a separate account and, if you move out, get your name taken off utilities. If you have a mortgage or loan, contact your bank to advise them the relationship has ended and make sure loan re-draw facilities are closed down and that any future decisions require joint signatures.

If all you're left with is fading memories and debt, you really have two choices.

You can go after the debt hard. Get your ex to agree in writing what they owe you and draft a realistic plan for paying the money back. Ask them if they can borrow money from another source to repay you. If it's a joint loan or mobile phone contract, see if you can get the terms changed so that you are not longer liable. There's also the option of pursing the matter in the small claims court, but that's going to have a big impact on your relationship with your Ex and you will need proof any money was a loan not a gift.

The other alternative is to write it off completely. I've seen friends who have put their financial and emotional lives on hold because they're owed money they will probably never see again. Rather than setting their own financial goals, amending their savings plan for single life and moving on, they put everything on hold because when they get the money back that will sort out all their problems. So sometimes it is worth chalking it up to experience.

There are 54 reader responses to "Protecting Yourself Against Sexually-Transmitted Debt".