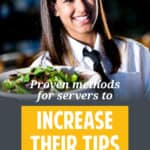 In 2004 Dr. Michael Lynn, associate professor at the Cornell University School of Hotel Administration, produced a paper entitled “Mega Tips: Scientifically Tested Techniques to Increase Your Tips” [PDF]. If you work in a restaurant, reading this pamphlet could help you increase your earnings. But if you don't work in food service, knowing these techniques may help you separate good service from subtle manipulation! Lynn writes:

Among the scientifically-tested techniques to improve tips are these:

I don't blame servers for employing these techniques to improve their earnings — I waited tables for several years and drew many smiley faces on customer checks — but I hope they don't blame me if I decide to base my tips on the quality of service. If you really want to earn more from me, keep my water glass filled!

There are 127 reader responses to "Proven methods for servers to increase their tips".