How moving to a developing nation improved our financial situation

This guest post from Craig Ford is part of the “reader stories” feature at Get Rich Slowly. Some stories contain general advice; others are examples of how a GRS reader achieved financial success — or failure. These stories feature folks from all levels of financial maturity and with all sorts of incomes. Craig writes two blogs: Money Help for Christians and Help Me Travel Cheap.

On 16 May 2006, I boarded a Folker 100 aircraft with my wife and ten-month-old daughter. We made the short flight from Port Moresby to our new home — Alotau, Milne Bay Province, Papua New Guinea.

To be honest, the move had nothing to do with money. We moved there to do missionary work in Alotau. However, more than four years later, I've found that our decision to move to this third-world country located in the South Pacific actually had a very positive impact on our finances. (For some context, I have an interview with some PNG citizens so you can learn a little about their standard of living.)

Over the last few years I've read several posts at Free Money Finance where the author has introduced the cost-saving benefits of moving or retiring overseas. In this post, I want to highlight several ways how living overseas has improved our financial situation. 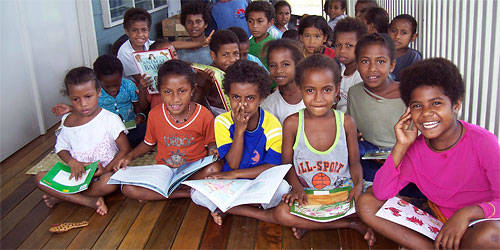 People spend a lot more money when their neighbors spend a lot more money. If the neighbor's kid has an iPod, laptop, backpack, new running shoes, and a shiny bike, then we want our children to have enough stuff to “fit in”. Maybe you don't feel a temptation to keep up with the Joneses, but you probably don't want to be so far behind that everyone notices.

Living in a third world country has dramatically diminished my desire to own Stuff. It's diminished because our neighbors don't have Stuff. There isn't a pressure to keep up with the Joneses, but instead the pressure is towards lifestyle de-flation. To live with less. To live more simply. To be more generous.

It's not unusual to see kids with worn-down sandals, wearing only one sandal, or no footwear at all. The first thing we feel tempted to do when we get a new pair of shoes is get them dirty so they don't look so new.

In our hometown, Alotau, you couldn't even find much worth buying if you tried. T-shirts at the stores are about as thick as a piece of Kleenex, and second-hand clothing stores tend to buy bulk used clothing at the cheapest price possible. This often means all the clothes are between XL and XXXL. Which, by the way, is very unfortunate because most of the local residents are very short and thin.

Essentially, anything related to labor is very cheap. The current minimum wage here is about $1 USD per hour. (I'll put all references to price in U.S. Dollars). Over the last couple of years, that has tripled — it used to be 33¢!

As such, you can be obscenely generous in the eyes of the local citizens and still pay very cheap labor costs. I recently had some work done on my truck. The guy who did the work typically gets paid $1.80/hour at this day job. I had him do some work on my truck and paid him just over $7 per hour. While some people might rant and rave that that salary is a sign of the injustice in the world (which it is), he was able to make in one day more than he makes in a week. Let's just say that he didn't do any complaining.

In Alotau, anything associated with electronics and technology is very expensive. You'll pay $200-$300 for a basic digital camera. In a recent study that Adam Baker did on the cost of living overseas, I learned that we have the most expensive internet worldwide (at least amongst those who participated by sharing data). It's not unusual for us to pay over $150 per month just for a basic high-speed internet package.

Still, overall the cost to live here is actually much less than the cost of living in the US.

Sometimes You Simply Can't Buy Anything

Here's the absolute best way living overseas can improve your financial situation: Sometimes there's nothing to buy! I've spent several weeks in the area villages, and there's no store. Cash is useless. How much money could you save if you had no way to spend money in a week?

When you can't spend money, it's easy to save money. 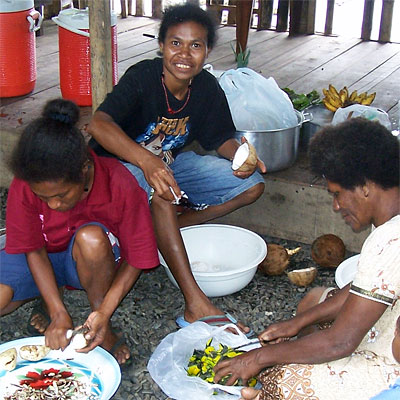 Before moving here, I bought everything using a credit card. I've never paid a dime in late fees or interest, but I've always cycled all our purchases through a credit card. However, plastic is almost useless here. There are two hotel/restaurants and one airline that accept credit cards. Otherwise, it's just plastic junk.

I've often wondered how much faster people trying to get out of credit card debt would be debt-free if they lived in a place like this — a place where the temptation to use plastic is removed. And a place where there's nothing tempting to buy anyway.

I think it would make a huge difference.

While our family still pays an exorbitant amount for international health insurance, you can't beat the prices when you need to make a trip to the local hospital. A visit to the hospital costs about seventy cents. Interestingly, it cost me $2 to buy a stamp to mail my claim to our insurance company. Isn't that crazy? A doctor's visit costs less than a stamp! There are no local private doctors, but if you want to get to see a doctor immediately, you can pay around $7 USD and get to see a doctor right away instead of waiting in line for a couple of hours.

Several years ago, some co-workers had a baby here in town. The total hospital bill came to $7 USD. If you've had a baby in the U.S., you know you're talking a four-digit bill — not a single-digit bill.

When we had our second and third children, we were able to travel to Canada to have our children. Our international health insurance had a $250 deductible if we had medical services outside of the United States. Inside the U.S., we would also have to pay 20% of the total bill. Since the average cost of delivering a baby is several thousand dollars, we felt blessed that we only paid that $250 deductible. 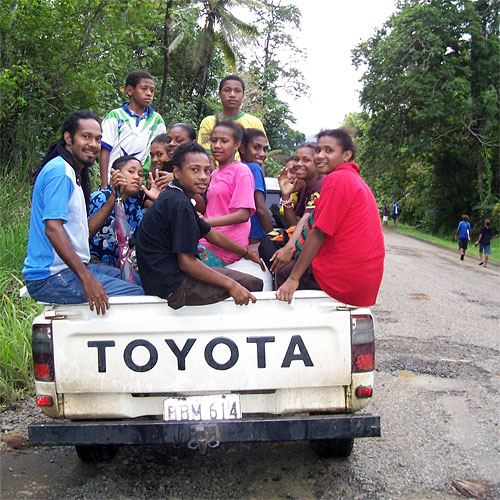 Transforming Our Stance on Social Justice

This is one of the biggest ways our financial situation has improved. Not in terms of having more money, but in terms of making wiser financial decisions. I'd like to think that we are more compassionate now than when we moved here.

Seth Godin claims poverty is an issue of “proximity and attention”. When you live in a third world country, you're in constant close contact with poverty, and it certainly has your attention.

Over the last four years, my view of money has changed. My desire to find a viable way to reach out to the poor has strengthened. My simple solutions regarding third-world poverty have been transformed into a much less concrete and more complex list of possible solutions. Poverty is complex, but we're willing to make an effort to help make real changes.

Now, more than four years after our Air Niugini flight landed here in Alotau, I can honestly say our financial situation has dramatically improved. That wasn't our goal, and it wasn't our intent. But, at the end of the day, we've changed in how we handle money and how we think about money — and we're better off for it.

A brief intro to peer-to-peer lending