This guest post from Steven is part of the “reader stories” feature here at Get Rich Slowly. Some reader stories contain general “how I did X” advice, and others are examples of how a GRS reader achieved financial success — or failure. (Note that Steven is the author of Hundred Goals, a blog about achieving you goals while managing your finances.) 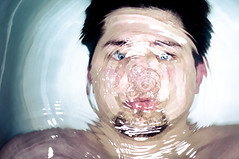 Three years ago, I was drowning in debt.

Week after week, I found myself falling further behind. Things had become so bad that I reached a point where I began using payday loan companies to pay the rent. Eventually I realized I was only making matters worse.

Making late payments on my bills was standard operating procedure; I felt like I had no other option. I was living paycheck to paycheck, and if I didn't have money in the bank when the bill came due, I'd just have to pay the penalty for being late. The debt collectors called daily trying to get their money, but there was no money to give.

I was in debt over my head.

The weeks when there were no bills to be paid and I had money in my pocket, I felt like a rock star! “Things are finally looking up,” I'd say to myself as I handed the clerk a pile of DVDs for my collection. This was my routine. Any time I had extra money, I would spend it. The next week it was back to late payments and penalties.

This was my life, and it never occurred to me that things could be different. I had no reason to change. Even though the bills were being paid late, they were getting paid…eventually. The weeks when I had money left over were like a breath of fresh air — just enough to keep me alive during the weeks when I found myself struggling to survive.

It wasn't until I received a phone call from the company that held my car loan that I realized I needed to change my relationship with money in a major way. Six months earlier, I had financed my first car, a used 2003 Chevrolet Impala. I didn't have the money to afford this car. Everyone knew I couldn't afford the payments except for me. I had tried getting approved at multiple banks and credit unions and always received the same answer: “We're sorry.”

Still, I persisted and was approved for a loan through the dealership. Now those rare weeks when I was able to come up for air were gone. I managed to shuffle bills and made promises to pay my creditors, but it didn't take long for the walls to come crashing down around me. I was back to the payday loan companies every week. But now, instead of paying off the loans, I was making the minimum payment and extending them even longer. I was fighting a battle I couldn't win.

When my phone rang that day, I expected to be able to make more promises and sweet talk my way out of the situation. I was wrong. I was told that if I didn't have the money paid by the end of the week, they'd repossess my car. I said I would have it, but really I had no idea how I was going to pull it off. There was just no way, so the next day I called them back but to try to work something out with someone else who worked at the company, but found myself talking to the exact same person as the day before. No deal.

That week, I worked as much overtime as I could, and ignored every bill that was due besides my car payment. I was able to pay the bill and keep my car…for now. I'd reached the point in my life where I realized that my relationship with money needed a complete overhaul. I knew I couldn't keep playing the debt game. I realized I couldn't beat the system.

For the next year, I worked constantly. I went to work early and left late. If there were projects on the weekends, I was there. I was making more money than ever before, and I was working my way out of debt as fast as I could. After a while, I reached a point where I felt like I could lay off of the debt repayment and work less overtime. I was trying to find a balance. I knew that if I didn't leave time for myself, I'd burnout and fall back into my old habits and routines. When I needed, I'd work overtime. And when I needed a break, I gave myself that option.

Once I became current on all of my bills, I pulled up my credit report and began paying off the old delinquent accounts. It took me years of hard work and diligence to reach this point, but I'm proud to say that I persisted through the difficult times and though it was never easy, it was worth every effort.

Today, I'm still not entirely debt-free, but I'm in a far better financial position than I was three years ago. I've managed to pay off my car, and my only debts are my student loans. Even though I'm still in college, I've begun paying them back. It's my goal to have 50% of my loans paid off before I graduate in May 2011, and eventually to live a debt-free life.

My quest to becoming debt-free is the first step in my journey to get rich slowly.

There are 29 reader responses to "I was drowning in debt".