This guest post from Meg is part of the “reader stories” feature here at Get Rich Slowly. Some stories contain general “how I did X” advice; others are examples of how a GRS reader achieved financial success — or failure. These stories feature folks from all levels of financial maturity and with all sorts of incomes. Meg writes about sane wedding planning and brave married life at A Practical Wedding and Reclaiming Wife.

Compared to most people my age (or say, my husband), I have a slightly bizarre relationship with money. My husband says I'm the only person in our generation who grew up in the Great Depression, and, well, he sort of has a point.

I grew up in a family where we never worried how the bills were going to get paid, or how we were going to eat…but when it came to the rest of it? Things were tight. Clothes, say, or shoes? A big deal. Going to McDonalds for a Happy Meal? A huge deal. And as for credit cards? Well, no. My parents spent much of my childhood trying to pay off the debt they'd had to incur early in their marriage, so I never saw my mom pull out a credit card unless it was an emergency. 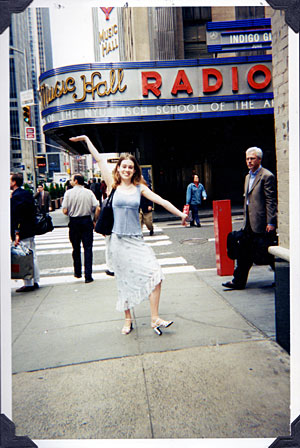 Turns out that growing up like that was good practice for what was to come. I lived in New York City during my twenties, worked in the arts, and was broke. Cry-when-your-jeans-ripped broke. Mice-in-the-sofa broke. Hearing-occasional-gunfire-on-the-way-home-at-night broke. But, somehow, even living in the most expensive city in the country on $18,000 a year, I was pretty happy.

I was working in professional theatre, I had great friends, I somehow always saved up enough to have a Makers Mark and soda (or three) on late nights in Hell's Kitchen. But what is really remarkable is that I emerged from this period in my life with zero consumer debt (and just a little bit of student loan debt). And, more amazingly, I emerged from it with savings.

Now, we're not talking life changing savings, but we are talking about several thousand dollars in savings, which is pretty impressive when you're living on so little that you qualify for various social relief programs.

None of that is to say that I somehow have an amazing and evolved relationship with money. In fact, quite the opposite. It's to say that when it comes to spending and saving, I'm really good at saving, and I'm terrible at spending. Terrible. And it turns out how you spend is pretty linked to how you deal with money.

I remember once, at about 22, I came home with a CD I'd bought. Now, living on $18,000 a year, this was probably one of two CDs I bought that year. So I bought a CD, and I came home and cried. I didn't cry because I couldn't afford the CD or because I'd put it on a credit card; I cried because I knew that somewhere out there (heck, somewhere in my Brooklyn neighborhood) there were families that couldn't afford to eat, and here I was buying a CD. I felt guilty. And even after saving up for that CD, I didn't really let myself enjoy it.

In the past three years, I turned 30, moved to San Francisco, started making a lot more than $18,000 a year, helped put my husband through law school, saved a heck of a lot more than a few thousand dollars, started my own business, helped pay for our wedding and our honeymoon, and merged finances. That's a lot of money lessons in a few short years. So, what did I learn?

Learning to spend
What I learned, really, is that if you want to have a healthy relationship with money, you have to learn how to spend just as much as you have to learn how to save. I learned that part of Getting Rich Slowly is learning how to say the word “rich” out loud, without diving under the bed in shame. I learned that supporting local economies and spending your money on things you believe in makes you feel a lot better about the money you do spend, and a lot better about the money you save. I learned that if you spend wisely, you can often painlessly spend less.

Let's take our wedding as an example. We had a pretty sane, reasonable wedding given our circumstances (um, I write a blog about sane reasonable weddings, so, you know). But, even given that, throwing a party for 110 people is a big undertaking, and I spent more of my own money on our wedding than I'd ever spent on anything in my life. It was stressful. 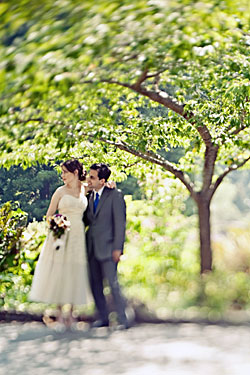 I've written a lot about what I learned about money planning our wedding, but here's the gist: spend more on what you care about, and just get rid of the rest.

We care about food. We spent half of our wedding money on local, sustainably-produced food cooked by a local catering company, a small business run by serious foodies. The food at our wedding was great — I mean, people still bring it up with a dreamy look in their eyes a year later — but more to the point, I feel good about that huge chunk of change that I dropped. And feeling good about that let me just slash a bunch of other things and not miss them: no DJ, no bridesmaids dresses, no rental tuxes, no favors, no florist, no traditional wedding dress. Gone.

But we loved our wedding, and people talk about how beautiful and fun it was, not about how we skipped half of the important things.

As we've started to set up a married budget (I'm still our sole breadwinner, so things are a little tight), we've taken a similar approach. We stopped buying factory-farm meat for example, and are only buying local grass-fed meat (I know, I know, we live in San Francisco and we only eat grass fed meat, feel free to roll your eyes a little). This means we eat a lot less meat then we used to (hello, beans and rice), but I feel a lot better about the meat we do eat. Adjusting the way we spent our money allowed me to feel rich (I was able to support my priorities and ethics, hooray!) without spending a penny more.

Feeling rich
So. I'm still always going to be better at saving than at the spending, I'm sure of it. But I'm slowly learning that part of patting yourself on the back for taking care of your finances is letting yourself feel, well, rich.

It's skipping all those $2 badly-made tank tops that you're going to throw out at the end of the summer anyway, and buying one $40 shirt (on sale, natch) that you'll feel good in for years. It's re-prioritizing your budget to get rid of the things you don't actually care about, and making a tiny bit more space for what you do care about. It's buying yourself fresh flowers now and then because you deserve it. And then, once you've put those flowers in a vase, it's letting yourself be the compulsive hoarder that you are, and checking the balance of your mutual fund.

Because, hey, some things are never going to change.

You can read more from Meg at A Practical Wedding and Reclaiming Wife. Wedding photo by One Love Photo.

There are 47 reader responses to "Learning to Spend".