This guest post from Alissa is part of the “reader stories” feature at Get Rich Slowly. Some stories contain general advice; others are examples of how a GRS reader achieved financial success — or failure. These stories feature folks from all levels of financial maturity and with all sorts of incomes. I like all of the reader stories I publish, but for some reason I particularly like this one. Update: Now with photos! Alissa e-mailed two images of her chain of debt.

In April 2007, I found myself owing $6,500 to my credit cards and $24,000 on my student loans. While not a lot, I was only earning $31,000 and living in Washington, D.C. Earning $31,000 in the D.C. area is not a comfortable salary, especially when you have to pay a large portion of your health insurance costs out of pocket after taxes. Thankfully my student loans were all Stafford loans, and I had them on an income-dependent payment plan.

It was around this time that I officially decided that I wanted to go back to school to get my PhD. In Microbiology, you don't get much freedom in research with only a BS. I knew getting into graduate school would be hard, and that simply paying for the application process would set me back a few hundred bucks. I also knew that the average stipend for a Microbiology PhD student wasn't large, so I wanted to go off to grad school with as little debt as I could. 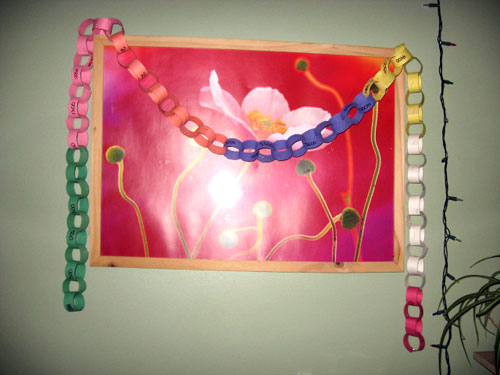 Breaking the Chain of Debt

To get the ball rolling, I decided that I needed a visual reminder of my debt, something I could look at every day. So I made myself a literal paper chain of debt. I made each link worth $100 and each color group a thousand. Each time I dipped below an amount on a link, I could reward myself by cutting it off.

I was so psyched each month when I could cut off more than one link! But to get myself credit card debt-free in less than two years and not have to pay for my applications with more debt, I had a lot of work to do. 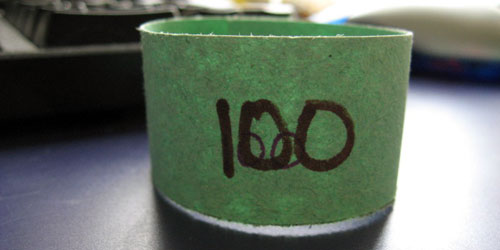 I was in the midst of learning about personal finance and was able to find some very simple things that worked well for me to help me spend less than I earned and still have money to pay off my debt. I really don't feel any of these are particularly special or unique, but it took me a while to realize that I could make it all work and pay off my credit cards. Here are some of the major things I did to help me reach my financial goals.

Even with the addition of a $2,000 emergency vet bill, all of my consumer debts were paid off March 2008, allowing me to save money for moving for grad school. I accumulated no new debt buying what I needed to move and had enough saved that I paid for what I needed after moving with cash.

Now, two years into graduate school and earning the least I've earned since graduating from undergrad in 2001, I live more comfortably than ever. I carefully budget my money each month. I have not only a general emergency savings, but also targeted accounts. If one of my cats gets sick, I have money set aside to pay for it. I'm mindful of how much I spend on everything, knowing that if I'm careful, I can have some fun even on a meager stipend.

This has also allowed me to start paying back my student loans while still in school and while my loans are in deferment. It doesn't sound like much to only owe $23,618 now, but I know that if I weren't making any payments, I'd owe even more in the long run.

The biggest thing that helped me along this path was deciding what my goals were and then trying to align my actions with those goals. Blogs like Get Rich Slowly really helped me see that I could do it. This is the ideal I carry with me today.

Today, rather than being $6,000+ in credit card debt, I now have almost $5,000 in the bank to be able to reach the goals I've set for myself. I can now take a trip to see my parents this summer without having to worry about how I'm going to pay for it. No, I don't get to eat out a lot, nor do I have the newest most fashionable clothing, but I've realized those things aren't important to me. What is important to me is having money to spend on what I do think is important to me. To me, this is true financial freedom.

There are 60 reader responses to "Patience and persistence pay off".