This guest post from Michael Robertson is part of the “reader stories” feature at Get Rich Slowly. Some stories contain general advice; others are examples of how a GRS reader achieved financial success — or failure. These stories feature folks from all levels of financial maturity and with all sorts of incomes. Two years ago, Michael shared a guest post about direct stock purchase plans. Today, he shares his personal story, which is about sailing away from the American Dream.

I'm a healthy 42-year-old family man with a fine little house and a secure job with a salary that just made it over the six-digit milestone. I'm fortunate beyond measure, deep into the American Dream. In a few months — if everything goes according to plan — my life as it is today will be gone: I'll be unemployed, another family will own our home, and the four of us will be on the road to Mexico in our Ford Escort station wagon.

My wife and I did what we were supposed to — that's how we got here. It's where we set out to be. But four-and-a-half years ago, we decided we wanted something different. We came up with a five-year plan.

The Five-Year Plan
At that time, we each spent 10 hours a day out of the house earning a paycheck. We came home tired from our work life and tended to the demands of our domestic life. Regrettably, kissing our girls goodnight was too often just another chore to complete: bedtime was done. Then we'd crash, get too little sleep, and wake to repeat the routine. To what end? Comfort? Security?

We decided to exit this well-worn path of comfort and security. We wanted a lifestyle that afforded us time to coalesce as a family and the chance to expose our girls to something other than the rat race. So we're doing something radical to get both.

A few months ago — per our plan — we walked into a downtown Washington, D.C. bank, paid a $99 closing fee, and signed the papers needed to borrow $64,000 against the equity in our home. Days later, we wired that money to an escrow account in Washington state and closed on the purchase of a 32-year-old boat, sitting in Mexico. She's 40 feet long, a sailboat, big enough to live on, stout enough to sail the oceans of the world.

Our planned lifestyle afloat will be as rich — if not richer, in many different ways — as our urban D.C. lifestyle, but will cost substantially less money (much less than the poverty level for a family of four in the U.S.). We have enough equity remaining in our home (a fixer-upper we bought in 2001) to fund a life afloat for roughly five years.

Financial insanity? Absolutely. As I wrote, our planned path is not one of security. Yet we feel plenty financially secure.

Unconventional Financial Security
How can we feel financially secure? By looking at this not as an early retirement, but as a job transition. I plan to follow my bliss and write full time, freelance. I'm moving from a very secure, well-paying, uninspiring job to one that is neither secure nor well-paying. Because we're changing our lifestyle, our cost of living is plummeting with our income. Consider that we will start out with five years of living expenses in the bank, and things begin to look pretty rosy.

Okay, maybe rosy is a stretch. The main reason we both believe we can afford to make this radical lifestyle change is putting money away for retirement has been a focus of ours since before we were poor newlyweds. When we launched our five-year plan, we further accelerated that funding, increasing our retirement account balances as much as possible. We don't know how much money we'll need when we reach the legislatively-defined retirement age in 25 years, but we don't feel bound to continue working to contribute to that sum until our hair is white. We feel we've got a good start, given the time premium we gained by starting those accounts early and funding them aggressively.

By design, we didn't conceive our plan to hinge on any specific financial goal or milestone; our departure isn't tied to saving a specific amount of money. Instead, the five years we gave ourselves to save more money was arbitrary, but also considered the ages of our girls. Because our family is our motivation for making this change, and because the girls aren't getting any younger, our timing is set in stone. We leave when five years is up, come hell or high water. I think that aspect of our plan is especially important. It's easy to find a reason to not follow through with a plan or goal that involves change; there are always too many rational, logical, and often compelling reasons to stay the course. This is as true for a radical lifestyle change as it is for a commitment to go to the gym three times a week.

In fact, if our leaving depended on us having a specific amount of money saved, we wouldn't be leaving as planned. Since committing to our five-year plan in 2006, the financial world imploded, seemingly led by our home's value. Our original financial projections included about $100K more equity in our home than we have today. Our original boat budget was higher too.

The Age of the Radical Family
The very fabric of our society is wrapped around a framework of rules and expectations. The U.S. economy is based on the expectation that most of us are on the path our family is abandoning. Our grandparents grew up in a world in which there were just a few well-worn paths from cradle to grave. And things have changed.

As our individual financial security has become more abstract, it's given rise to a liberation, an increasing feeling among many that they can chart a different path through life. And can they ever! 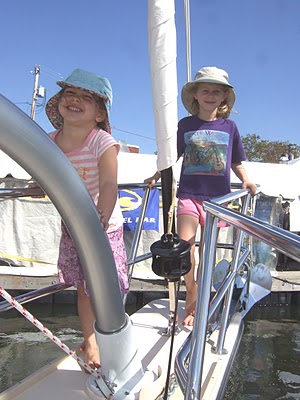 The Internet is filled with blogs of families who have charted a different course, taken a radical turn off the beaten path. Among this population, sailing around the world with kids is not uncommon; there are literally hundreds of families who have done it or are out there doing it. On our blog, Log of s/v Del Viento, we list links to about a dozen out there now — each representing at least a dozen more families — and these are just the English speakers! Other families of similarly modest means have found their own way to do something radical. The BareNaked Family raised their kids on the road, and the Podlesneys are just setting out to do the same. Families On The Road is a gathering place for many more. Way off the beaten path is the Vogel family, just now nearing the end of their multi-year journey from Alaska to Patagonia — on bicycles. Their site is filled with links to other bicycling families.

More than any time in human history, and especially here in the United States, it makes sense to question assumptions and to consider alternatives. Whether it's sailing, RV trekking, bicycling, or something else, consider where you'd rather be and then consider working hard to get there, instead of wherever it is you're working hard to get. Rest assured your financial life will be less certain, but you'll still be getting rich slowly, richer in all the things that matter most.

J.D.'s note: I wish my father were still alive to read this story. This was always a dream of his. But unlike Michael and his family, he never took the financial steps necessary to make his dream come true.

There are 52 reader responses to "Sailing Away from the American Dream".