Earlier I posted a link to a story that indicates that new cars are more affordable than they have been since 1980. This prompted a couple of you to e-mail me your car stories. An anonymous reader wrote to share the following:

I've purchased two new cars in the past six years, but the experiences couldn't have been more different. The first car was a Honda Civic purchased in 2000 just as I was finishing college. As a smarty-pants software developer entering the twilight of the dot-com workforce, I had little concern about the cost or value of the car. I knew that I would be wealthy with my new job, but for the next six months I still had to live on student wages. I felt that I needed a car soon before entering the workforce.

My then-girlfriend borrowed the car and had a little accident. She was a broke college student and I was a newly minted professional beginning to realize that a $50,000 job doesn't stretch nearly as far as it sounds when you take on real-life living expenses. She had no money to cover the body damage costs and the deductible on my insurance was so high that it was impractical to repair the dents.

A year later, when the lease was matured, I had three choices:

I started to become wiser about money, and realized I had done everything wrong. I paid down the loan rapidly and incurred the minimum interest charges. Once it was paid off, I created a virtual car payment into a high interest bearing account, which leads us to the better story. 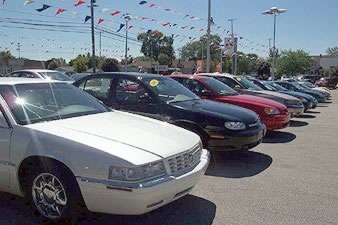 My next car purchase in the spring of 2006 was quite different. Through frugal living and sensible investing my wife and I saved up about $40,000 and began looking for a new car. We were partial to Volvo and considered a new model but it would have cost around $35,000. We didn't like the idea of burning up years of frugality on one purchase so we looked carefully at auto auctions and internet listings for used cars. We had months to watch for a good deal and we found a 2004 Volvo with 8,000 miles selling for $24,000. We negotiated the price down to $21,000 and invested the savings. Today, we have another virtual car payment for when the Honda Civic reaches the end of its life — we expect to pay cash again.

A few key differences between these two car buying experiences:

Naturally, I was in a different stage of life for the second purchase. But many people resign themselves to perpetual car loans when they shouldn't. It is difficult to make good financial decisions right out of college, but I could have applied some of the good habits in the second transaction to the first. I hope the story offers some perspective and inspiration for others.

If you have a story about personal finance that would help readers of this site, please drop me a line.

My rule for purchasing a car:

Buy any car you like, as long as you buy it with cash.

“I rushed the first transaction, but was patient for the second.”

This is the key. If you _have_ to buy a car, or rush into it, you will get screwed.
If you can comfortably drive home in the car you came in, you can just wait until they give you what you want.

WEll, you certainly have made some good choices and are on the right track.

I would like to point out, however, you are paying alot more money this time, and for a car that is far less long-term mechanically reliable than the Honda you paid too much for 🙂

Thank you for sharing your experience!

Basically I am in the same situation as you were. I just finished my degree and got a software developer job. Knowning that I am earning a pretty good wage, I am looking to buy/lease a new car. 🙂

Thanks for the advice! This really helps me in making my car-buying decision.

Ok, so I’m a pretty big car fanatic (check my website if you don’t believe me) and I am the type who thinks $150,000 for a Ferrari is “reasonable”. I’m only 27 years old and have bought 4 cars in my life, and I took comment #1’s advice and paid cash for them all. In fact, I dog walked starting at age twelve and bought my first car at 14, long before I could even drive it. (It was a mint condition 1966 Mustang.) I have to agree, paying cash for a car is the only way to go. You… Read more »

Good advice! I also recommend reading the most recent Consumer Reports automobile issue. It has a fabulous rating system for almost all makes and models going several years back. Also, read our car dealer scam news feed to see how car salesmen are swindling customers.

Awesome! We too are saving for our next car and are driving our 98 Honda CRV with 125,000 miles until we have enough cash. It’s so good to hear other people are doing the same thing. Anyone heard of Dave Ramsey? I listen to his radio show, he teaches people how to live without credit. He says if you live like noone else, (live below your means, etc.) later you can live like noone else) in this case drive like noone else(paid for cars)…..wwwdaveramsey.com. Delayed gratification is character building and distinguishes the adults from the children.

The biggest cost of owning a car is the depreciation. Your best bet it to buy a car not 2 years, or 4 years old, but 8 years old. Put a new engine in it. Then drive the crap out of it. You will save on average $300 per month. I’ve done the math. And in case you are wondering, I drive a 2005 jaguar x. It’s a 40K car that sells today for 12K. I rest my case.

I wouldn’t even know where to get a car like this, if I had the money