When Mr. Money Mustache came to Portland in early August, he mocked my motorist ways. (It's kind of what he does.) By any other standard, I'm not a frequent driver. Except when I'm traveling across the United States in a motorhome, I aim to walk more and drive less. My guess is that when I'm not being challenged by a frugality blogger, I maybe clock 300 miles a month in my Mini Cooper (or about 3600 miles per year).

But Pete thought my car-reliance was out of control. He even made fun of me (in a good-natured way) during the Money Boss workshop he and I put on together at World Domination Summit. He created a custom slide to document one way I could drive less. 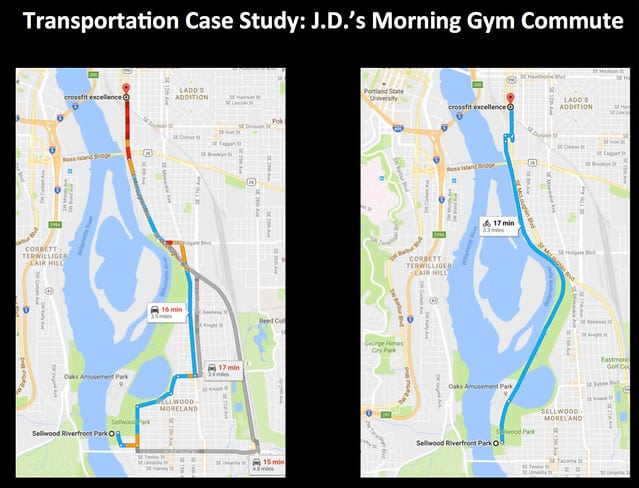 You see, when I drive to the gym during rush hour traffic, it takes me about seventeen minutes to cover the four miles. It's not fun. But if I were to bike the route, it'd still take me only seventeen minutes — and there'd be no hassle.

For each of my excuses, Mr. Money Mustache had a reasonable response. “You shouldn't make excuses, J.D. You can make this happen.” I agreed to give it a shot.

In the three months since Pete's visit, I've made a conscious effort to drive even less than I drove before. I'm not biking to the gym every day, but I'm doing so more often. And I'm biking for more of the middle-range errands for which I might have driven before.

My short-range habits haven't changed. When I was hunting for a new home four years ago, I picked this spot precisely because the neighborhood was walkable. And I walk it. I walk through the extensive parks every morning with the puppy, and I walk through the neighborhood several times each week to run errands. Long-time readers know that walking is my jam. It's as much a part of my lifestyle as biking is for Mr. Money Mustache.

So, what are the results of this reduced-driving campaign?

In 93 days, I've driven 618 miles and filled the tank on the Mini Cooper twice. (I filled up the morning MMM and I did our presentation on August 11th. I filled up on September 28th, which was Kim's birthday. And I filled up last Saturday, November 12th.)

I averaged 6.01 miles per day on that first tank of gas, and I averaged 7.32 miles per day on the second tank of gas. Why the increase? Two reasons, I think. First, the rainy season has set in so I've opted for the car a couple of times I might have biked if it were sunny. Second, I've done a couple of longer trips to the family box factory and back.

Since Pete's visit, I've averaged 6.65 miles per day of driving, which projects to less than 2500 miles per year. I'm okay with that, especially since that's roughly the same distance I walk.

Mr. Money Mustache might call this experiment a success. I've reduced my driving from about ten miles per day to less than seven miles per day. In fact, I've cut my car usage by almost exactly one-third! If I were the average American who drives 1123 miles per month, a 33% reduction would be something to celebrate. No question. By trimming 371 miles per month of driving, I'd save 15 to 20 gallons of gas, or $30 to $60.

But really, I'm only driving 100 miles less per month and saving about three or four gallons of gas. Would that ten bucks per month be better off spent elsewhere? Or is it worth it to spend that cash to save time and stay dry? Honestly, I'm not sure. During the warmer months, I'm fairly certain I'll heed my colleague's advice and bike more often. But during the winter? I may be one of those clowns in a car.

Your Turn: How much do you drive? Have you looked at ways to curb your car usage? Do you go out of your way to carpool and to “batch process” errands? Do you live in a neighborhood and/or city in which biking is an option? What about walking? What's the biggest thing that prevents you from driving less? (Or, if you don't drive much, what's the biggest change you made to keep you out of the car?) On my recent Ecuador trip, I met a guy from Ottawa who owns an electric bike. He says it's revolutionized how he gets around. Anybody else do that?

We drive….too much. We live 15 and 18 miles away from work respectively, and drive every day. We used to carpool. The one thing we have going for us is that one of those cars is electric (the one that does the longer commute, and drops the Toddler off at daycare). 4 years ago we lived in a city. We drove not at all. We took a train in to work and used public transportation or walked everywhere in the city. I want to get back to that lifestyle because I really, really, really (enough reallys? no. lets add one… Read more »

attention: electric car might push out more CO2 then a “normal” one, depending on the energy mix you use.

Not only do I not have to drive to work, but I now have time to walk to the grocery store, gym, and even shops that are 1 1/2 miles away!

Am loving it too as I’d like to climb Pike’s Peak next summer and all this walking is a great start.

I bike almost everyday for the commute and now that Costco is just 2 miles away I might make a few bike trips down there to pick up groceries and stuff. The automobile however is used anytime we need to cart the family around or I have to go to someplace where I can’t be sweaty. I do however bike in the middle of stormy weather.

This won’t help your current situation JD, but if any of your readers are considering getting rid of their car (only or second car), try it! I gave up my car 16 years ago and only occasionally have a passing thought about owning one again. I live in a city and walk or take public transit most of the time. About 3-6 times a year, I rent a Zipcar (car share company, see also CarToGo) for longer trips not easily accessible by regional train. There are peer-to-peer car sharing (Turo) and rides (Uber, Lyft) also. So obviously, the demands of… Read more »

We unfortunately live in an area where it is completely unsafe to walk or ride a bike to work daily. That being said we did the next best thing and moved to within 4 miles of work when buying a house. At least that way our car usage is much reduced. I could see if I lived in an area where there were not mostly blind corners with no shoulder I’d have a different solution. I just prefer rural areas with less developed infrastructure.

This is exactly my issue as well. I would love to drive less. But I also want to live in my rural area which is two lane roads with speed limits of 55 and no shoulders, plenty of blind curves. So I have opted to drive more at this time rather than uproot my whole family. Sigh.

I feel like I drive a lot but it’s all family related. Kids to two different school campuses every morning and after noon. I work from home so even though the school is downtown I have to drive back to home for work so that makes it about 8 miles round trip!:-) We have a Kia Soul that’s been averaging about 33 mpg and a scooter that gets 100+ mpg. Then there is all the extra drive to swim team practice, picking up mail, and all those social outings. We tend to take the bus when we can but to… Read more »

I appreciate that you are driving less. (We gave up our second car 3.5 yrs ago). We live in a small suburb that is very walk/bike friendly. BUT, our part-time-business-in-retirement requires a weekly drive to buy merchandise that requires a 90 mile round trip. Some might criticize driving that far, but it is necessary to maintain the business we love. Obviously, getting rid of a car makes financial sense. It is nearly impossible to not spend $400+ a month when depreciation, taxes, gas and upkeep are taken into consideration. But many times, I sense that people are giving up cars… Read more »

Canadian winter, need I say more? Also, as a single woman, I do feel safer travelling with a hunk of metal around me than walking alone at night.

I do make a conscious effort to walk more and drive less, but it gets tough when the days get shorter and the weather turns. However, our community is investing in more public transportation (still a couple years away, alas!) and car/bike shares are just starting to appear in my area. I’m not going to feel guilty for owning a car now, but I can see revisiting that in the future.

JD! I admire your sorta-success here but need to chime in with what I feel you are missing: – Your gasoline cost is NOT a reasonable way to estimate the cost of driving. Direct car costs are about 50 cents per mile, so use that as a base personal cost. – When you drive a car in a city, you harm every single other person in that city by making it less livable. Even worse if you do it in rush hour, as you are making peak traffic even worse. Plus, to a lesser extent you are harming every person… Read more »