Welcome to the first of what I hope will be many reader stories at Money Boss. Just as I did at Get Rich Slowly, I want to share real-life adventures from readers like you. First up, here's the tale of how Ruslan Osipov boosted his saving rate from puny to brawny.

My name is Ruslan, and I’m a traveler. At least I feel inclined to give myself such a colorful title after being on a road for a few months. In addition to seeing new places, I like building software to get paid and eventually retire.

Recently, I posted a plot of my saving rate over at /r/financialindependence on Reddit: 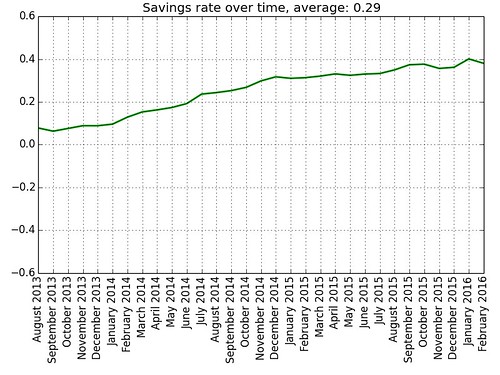 This graph shows a 12-month moving average of my saving rate. (Using a moving average smooths things out. Otherwise, the plot would look like the New York City skyline, up and down from month to month.)

After J.D. saw my post, he sent me a message.

I loved the graph of how your saving rate is growing. Would you be willing to write an article for Money Boss about how you've done this? Some folks complain that high saving rates aren't possible, but you've shown it's possible to make changes in order to earn a bigger “profit” over time.

Here then is the story behind the picture.

Keeping Up with the Joneses

Three years ago, I was woking an office job in a Philadelphia web shop. Not knowing much about money, I scaled my expenses up with income. The more I made, the more I spent. This is something I did without much thought. Like most people, I was trying to “keep up with the Joneses”.

In 2014, I moved to San Francisco Bay area for a twofold salary bump. But, as the plot shows, my saving rate didn't increase. My salary may have doubled, but so did my expenses.

Mind you, I didn’t live paycheck-to-paycheck, but my saving rate was insignificant.

For me, the turning point (or more of a wide gradual U-turn) came when I found the /r/personalfinance community on Reddit and started reading more about money. That’s when I realized that money management is a learned skill that no one is born with. Over many months, I absorbed info about personal finance and managing one’s money supply. I learned about negotiating salary and insurance rates, about saving for retirement.

I started small. I cut out little things I could easily live without. Buying coffee? Huge waste of money. Eating out instead of making a quick and easy meal at home? Not worth the trouble. (I always enjoyed the meals I made more than the restaurants anyway.) Somewhere along the way, I started replacing brand-name products with generic versions.

Slowly, saving pennies turned into saving dollars. Money started accumulating in my bank accounts. Saving is rarely about cutting out some huge expense — there just aren't many to cut — it’s about making tiny tweaks to myriad little things here and there over a long period of time. Saving is about changing your mindset.

At the end of 2015, I took a road trip across the United States. Luckily my job doesn't require me to be in a specific place, so I could still work. It took me three months to take a Southern route from San Francisco to New York, and then a Northern route back to Silicon Valley.

Before the trip, I converted my hatchback for sleeping. I tried a few local trips a week or two in length. I packed my clothes, some cooking supplies, and my electronics. What I found odd is that besides a few adjustments, I felt like I wasn’t missing anything. 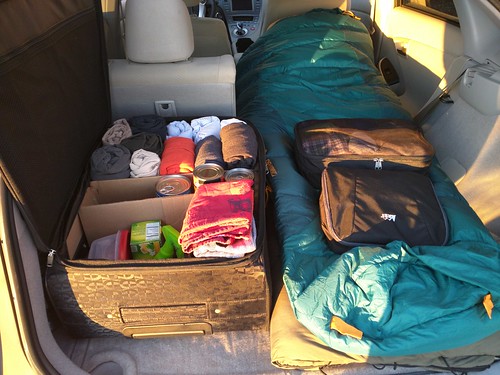 I didn’t miss having a huge amount of space, my couch or television, various tables, unnecessary amounts of pots and pans, and all the junk I had already been getting rid of.

Before I left, I put some stuff in storage, sold some other things, and gave some away. I canceled my lease and embarked on the journey. I spent three months on the road and truly enjoyed it. Sometimes I slept in my car — in campgrounds or in the city — and sometimes I stayed at AirBnB places here and there. (I spent one week in the mountains of Pennsylvania to cure bronchitis I picked up along the way.)

Now I’m back in the Bay Area, and I’m working hard toward financial independence and early retirement. After spending months on a road, it’s strange to see my storage unit full — full of things I don’t even need or even want.

And this brings me back to “keeping up with the Joneses”. Do I want to be back in the rat race? At this point, I don’t think so. I've learned that life can be perfectly fulfilling with less instead of more.

Do you have a story that would educate or inspire Money Boss readers? You should drop me a line!

There are 4 reader responses to "How Ruslan Boosted His Savings by Learning to Live with Less".