There's a new fad in the financial independence subreddit, one that might be fun for Get Rich Slowly readers to play around with. People have discovered Sankey diagrams, a type of chart that makes it easy to visualize data flows. That sounds sort of geeky, I know, so it's probably best to show an example. Or four.

Perhaps the most famous example of a Sankey diagram (certainly the example I've seen most often) is Charles Minard's map of Napoleon's disastrous invasion of Russia:

The Minard map has been called “the best statistical graphic ever drawn”. And now, for some reason, people have begun to adopt the same style to visualize their earning and spending.

Here, for instance, is a graph created by a 20-year-old student from Stockholm, Sweden: 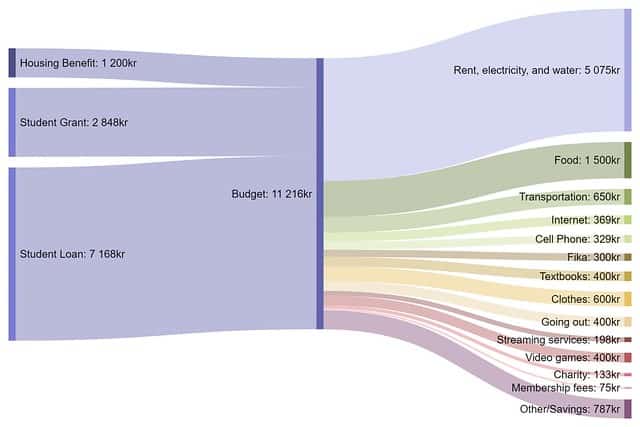 Here's the chart for an architect living in Buenos Aires, Argentina: 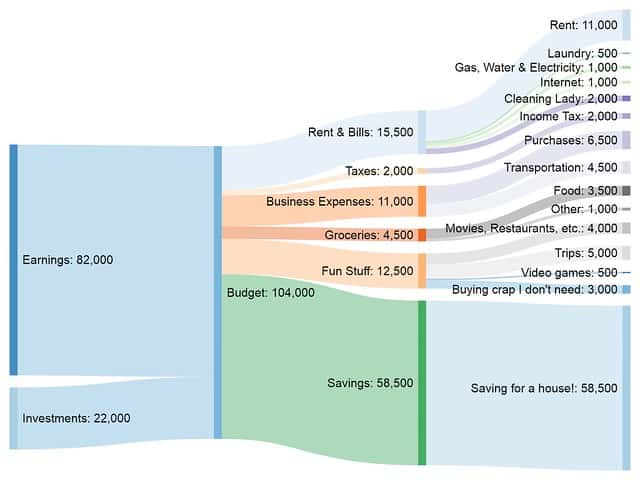 And here are the numbers for a 26-year-old unmarried female computer programmer who lives in the Bay Area: 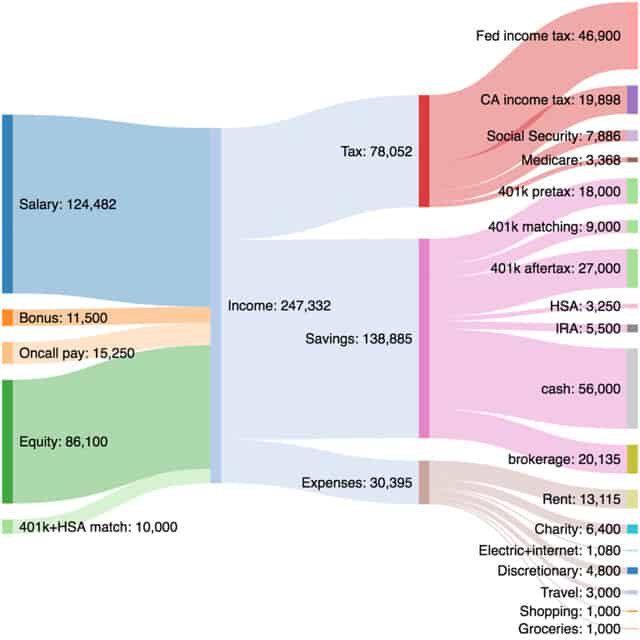 As you can see, Sankey diagrams really do make it easy to visualize certain data flows, including household budgets. You can track how various sources of income all enter a common pot, and then are disbursed to fund different aspects of your life.

Why are these visualizations so popular all of a sudden? I think it's because somebody stumbled upon Sankeymatic, a free online tool that allows anyone to build a Sankey diagram from their own data. This tool is highly customizable and includes a short but useful manual. 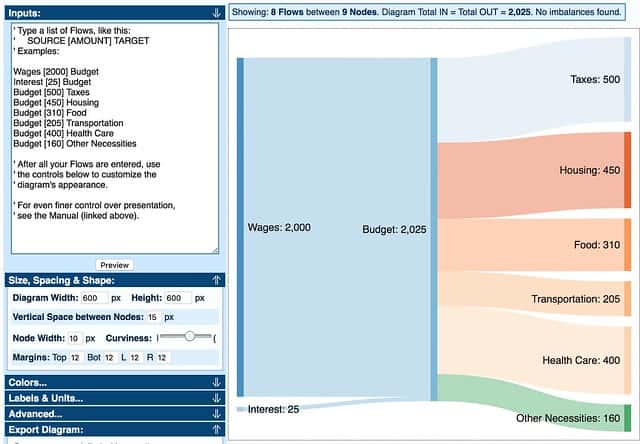 If you have the time (and the data), I highly recommend using Sankeymatic to visualize the budget flow for your household.

I haven't done a Sankey diagram for my own budget, but I plan to do so soon. Since May of this year, my expenses have been, well, out of whack. It's not that I'm indulging or anything, but once Kim and I decided to purchase this home, we entered a short-term phase where nothing was normal. Things have finally settled, however, and I intend to resume regular expense tracking in January.

(I'm doing it now, actually, but I'll resume reporting in January. And when I do, I'll do a Sankey diagram every month!)

[For far more than you ever wanted to know about Sankey diagrams and flow maps, check out this extensive discussion at Edward Tufte's site.]

I have never heard of the Sanky diagram before. It looks pretty neat: visual, simple, and comprehensive!

I look forward to your expense report in January! 🙂

This is fun! Something actually new to me.

Wow, this is really cool. I will try this for our 2017 annual financial report. Nice tool. Thanks!

Ooh! This is rad. I can see having a lot of fun with this using various datasets.

It would be fun to journal how you spend each hour for a week and break it down visually this way.

Very cool. Thank you so much for posting this. I have twenty years worth of annual data and was looking for a good GUI to chunk it down. First, I’ll give it a try on my 2017 data to learn the program.

That is a great tool. Many people are visual and this would be helpful for their budgeting. It paints a picture or a map of where ones money is being spent or allocated. Very creative and useful.

Off to check out the site now.

BTW, congrats on the Rockstar Award for this one. Great content, great info to share with the community. Looks like that new writing shed is paying dividends already!!

Ooh, this looks like fun. I’m a data nerd professionally and personally and I’ve never even heard of these! Going to have to play around with making some 🙂

Very cool J.D., thanks for sharing! I’ll need to try this out with our finances. Been great having GRS back posting regularly again.

I do have a fondness for sankey diagrams ^_^

My husband does quite a bit of visualization work day-to-day, and I remember seeing a sankey diagram for the first time and referring to it as a snake-y diagram without knowing its name. Happy coincidence!

Haha. I keep reading it as “snakey” diagram too. I had to go back and re-read the post several times to make sure I didn’t actually type that.

guy on reddit kept misreading it that it said ‘swanky’

I did one here; http://othalafehu.com/monthly-budget-sankey/

This is a really cool visual. I am definitely going to put one of these together for our finances. This would be a great visual for someone wondering where they are going wrong in their budget.

I was just messing around with it. You can set it up by percentage also! I can’t wait to give this a shot with my 2018 budget.

This is quite interesting. I think I am going to try it with my next budget. I like how visual it is.

I see that there is a free add-on called Sankeysnip for Google Sheets.

Thanks, i love visual data that flows. My take on your article: sankey is pure “sanity”.

Late to the sankey game but better late than never 🙂
PF community is awesome!