The world of blogging has changed since I started Get Rich Slowly in April 2006. For one thing, “blogging” now encompasses other media. Some folks prefer to get their info via podcasts or video. (Me? I'm a reader.) 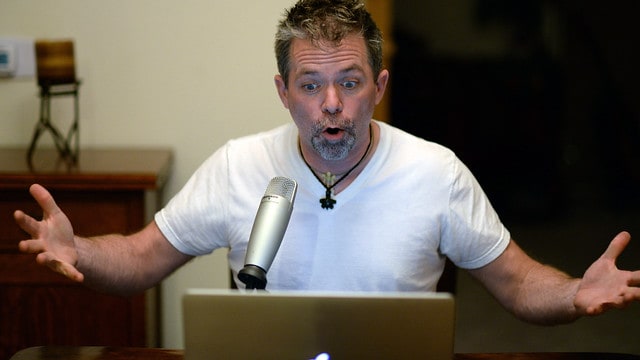 As an experiment — and to prove I'm not that old — I'm going to try a series of four weekly Facebook Live discussions. For the next four Saturdays, Kim and I are going to have a Saturday morning conversation about personal finance in front of dozens (hundreds?) of other folks.

That's right: My girlfriend is going to join me for this project.

After a lot of discussion about what format would work best, I realized that Kim's voice would be a welcome addition to these videos. For one, she's nicer to look at and has a more engaging personality. For another, she's not as far along the path to financial freedom as I am. In fact, she has some very real concerns about whether or not she'll be able to save enough for retirement by the time she wants to retire!

Adding Kim to the mix will make these conversations more interesting (we can interview each other) and allow viewers to get more than one point of view.

For now, we're only planning to do four of these. If people like them — and they're not too difficult — we'll make this a regular feature. (And, in the meantime, I'm preparing to create other video material for the GRS YouTube channel.)

We'll be sipping coffee and talking about money on Saturdays at 8 a.m. Pacific (which is 11 a.m. Eastern). You can join us at the Get Rich Slowly page on Facebook. I look forward to trying something new — and to interacting with an audience in real time!

Love that first topic-money is a huge source of stress and fights in relationships…couples that have it worked out seem much happier. Good luck with the FB live sessions!

Good luck the FB sessions. That sounds like a great opportunity for the readers to hear more from you. 8 am on Saturday is not a great time for us, though. The kid is up and being noisy by then.

I like the idea of experimenting with it. See how everyone responds and how many participate. I have a feeling you will get a lot of participants. I’m trying the same thing with live streams on Facebook, YouTube, and BiggerPockets.com.

Yes, Managing money in a long-term relationship looks like a great first topic. I hope I can remember to attend!!!

Is there a reason you decided to use FB for live chat instead of YouTube? You already have YouTube channel so why not use it for live chat?

Yes! With Facebook Live, we can interact with viewers in real time. Plus, I’m under the impression that we can snag the FB Live videos and repost them to YouTube, which gives us the best of both worlds. Also, the FB Live stuff is more informal. I want the stuff I create for YouTube to be more prepared and less off the cuff.

Several of the YouTube channels I subscribed to conducted real time online chat with their users and interacted with them in real time and informal too. Too bad since I don’t do social media (FB, Twitter, Snapchat). Good luck

Hah! I’m a reader as well but sometimes will do podcasts when I have the time for a long lissen—house chores or a long drive or whatever.

As for video, I avoid infovideos unless I can get specifically useful information from the moving pictures, so I often watch videos for exercise or car repair. But yeah, video is popular.

Live stream seems to be the new hot thing so yeah—sounds like a fun kaffeeklatsch or whatever it’s called.

I like this idea! I’m a reader as well, but can appreciate the fun and power of video, t oo.

I joined GRS in April of 2014. It truly changed my life, Thank You! It gave me much needed focus and direction. It let me know that there were people out there interested in the things I was, that were willing to share advice and their stories. I can’t emphasize enough how important it was to find GRS when I did. I learned a lot by sharing my story via the Diary sub forum. And, I learned a lot by interacting with others. I can’t remember all the names, but, a few that stick out: Eagle – Thank you for… Read more »

I hear you! I hear you! I need to get the forums reinstated. We’re having problem with the database we inherited. It’s corrupt. But we may be able to get another copy. In any event, we could certainly set up NEW forums. The trouble is there’s so much to do — new posts, site redesign, social media, monetization, etc. — that I always forget about the forums. This highlights something I keep saying in private: My biggest mistake in the reacquisition was beginning to publish new material right away. I underestimated the technical side of things. If I knew then… Read more »

Ok, since the past is gone, and we can’t bring it back, here’s a different idea— use something that’s already there and that’s current and allows anonimity unlike social media.

Start your own subreddit and let someone else bother with the rest. Focus on content.

ps. hmmmm… who is this?
https://www.reddit.com/r/getrichslowly

Haha. That’s me! Earlier this year, a bunch of us money bloggers were sitting around reading Reddit. “Do you guys have subreddits for your blogs?” somebody asked. We all sat there in a sort of stunned silence. Then we all rushed to found the subreddit before somebody else could — even if we had no plans to do anything with it. (One lessons we’ve all learned the hard way is that digital squatters can and WILL claim your name on new platforms. I know Reddit isn’t new, but this idea was new to us.)

great news then. there’s your forum! just link it from here & blam, done.

i think it was great that you started publishing right away. takes a while to build an audience. why wait?

people are gonna be clamoring for help in the upcoming recession. be already running!

let the engineers develop media platforms. you can just focus on content and… vacation, lol.

I agree! I miss the forums here so much. They were small, but welcoming and not overwhelming. Reddit is blocked at my company, so still keeping my fingers crossed that we can get forums back here eventually, even if the old content is lost.