The perfect gift is cheap and easy

If you're panicked because you still haven't thought of the perfect gift for the people on your Nice List, you'll be relieved to know you don't need to spend as much time as you might think looking for something thoughtful. You also don't need to run up your credit card bill.

Why? Because neither of these things is likely to be appreciated by the gift getter.

In fact, a 2008 study from Stanford University researchers found that spending a lot of time and money to select a gift doesn't make a bit of difference to the recipient. According to Francis J. Flynn, an organizational psychologist at Stanford, the price of a gift is more important to the giver than the getter. (Plus, most recipients actually prefer cash or something from a gift registry, such as their Amazon wish list.)

How (and where) to donate unwanted Christmas presents

If you give (or receive) a gift that misses the mark, returning the item is the natural thing to do. After all, return policies are pretty awesome these days.

However, if you decide to make a bigger impact with your gift -- an item that you've probably survived without just fine for the last year anyway -- why not donate it?

Why You Should Think About Donating an Unwanted Christmas Gift

Keeping the spirit of Christmas alive

By the time you read this, most likely all that's left of your neatly wrapped presents are scraps of wrapping paper, crumpled bows, and empty boxes. Hopefully, the kids are playing with their new toys and you've been reading an ebook on your new Kindle Paperwhite.

I've described a warm and cheery scene, and I hope it feels that way to you -- but what if it doesn't?

Let me say for the record that I hate rushing the holiday season - the appearance of Santa Claus in the stores as soon as the Halloween decorations are cleared out, hearing Christmas carols before the first snow has fallen, that kind of thing.

So why am I writing about holiday shopping when temperatures are still pushing 80 degrees at  the end of September? 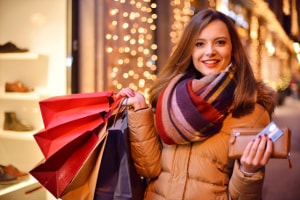 Well, I'm a great believer that people could better manage their finances if they did more planning ahead rather than simply reacting on the spur of the moment. <

The pros of experiencing the cons of poverty

At the beginning of October, I slipped five crisp Benjamins into my purse. I don't usually carry any cash at all, so I was feeling flush with $500 in my pocket.

It was all part of a simple experiment: Could I save on my grocery budget if I only paid in cash? While I will share more in the future about what I specifically learned about groceries and my budget, this experiment made me think about a bigger problem.

By mid-October, I had about $30 left. I valiantly tried to stretch the money to the end of the month, but I couldn't. A family of five simply needs more food than $30 can buy. So I dipped into the checking account. For me, it was not an issue. But what if this were another family's grocery budget and they had no savings, no access to credit cards or any other source of money? You can't just ask your children to starve until payday. So what do you do?

How to be generous with money

How to be generous with money when you don't have a ton -- that's a major question. Here's how one Get Rich Slowly contributor, Lisa Aberle, discovered some essential truths about money, friendship and giving.

An ice storm was coming. The last time we'd had an ice storm we were childless and lost power for five days. The romance of sleeping in front of the fireplace quickly cooled off along with the temperature in the house. If we lost power again, 39 degrees just wasn't going to be acceptable with two kids.

That's why my husband took a trip to the shed to get our generator ready.

Giving makes us happier, but what if you don’t have much to give?

Maybe it's because I'm getting older, or maybe it's that I'm in a better financial place than I was just a few years ago, but lately, I've been thinking a lot more about giving back.

In recent years, it's becoming more important to me to be socially conscious and charitable. I'm secure, I'm healthy, and I'm free. That contentment seems to urge me to check in on the rest of the world.

Or, maybe it's coming from a more selfish place.

The problem with the “perfect” gift

When it comes to gift-giving, I like to buy gifts that are exciting, maybe something that the recipient wouldn't necessarily buy themselves because it's not practical.

In fact, I so enjoy finding the perfect gift that I even have secret Amazon gift lists for my family members. When I come across something I think they'd like, I add it to their list for future gift-giving occasions. (Sound crazy? I got your crazy. I also have a "Gangsta Wrap" Pinterest board full of gift-wrapping ideas, so who's crazy now? Oh yeah, still me…)

Anyway, many years ago, buying the perfect gift often meant I'd spend more than I should. For instance, when my best friend had her first baby, I went a little overboard with the cute baby clothes, buying pretty much everything at retail price. Designer retail price. The parents reading this are laughing, because they know that those fancy baby clothes were only worn for a couple of months before baby outgrew them.

Charity, hobby, or mistake? The cat we didn’t keep

Jake and I have two cats and a dog. To us, having pets is one of the most important aspects of our lives and identity. You might even consider it a hobby. Unfortunately, it is a hobby that, as you will see, has not always been entirely strategic.

Our love for animals has permeated much of our lives. I've been vegetarian for over a decade, and Jake was veggie for six years and still cuts back where he can. We also have a standing commitment to donate only to animal welfare organizations. They're our charities of choice!

When Jake and I met, I actually had three cats. One of them was diabetic, however, and passed away. So when an ex co-worker of Jake's said that she had found a homeless cat she couldn't keep, he said yes. Sight unseen. Can you guess how well this is going to turn out?

After months of anticipation, Christmas day is finally here. And depending on your outlook, that could be a great (or an awful) thing. Just a few short years ago, I was a total Scrooge about the holidays in general, with a special hostility toward anything I perceived as forced gift-giving or wasteful spending. And while I still struggle with those notions to a certain extent, my perspective of the holidays has changed dramatically since I became a mother. Now it's no longer about "forced gift-giving." It's about generosity. It's about innocence. It's about the sense of wonder in their eyes when they wake to find their presents on Christmas morning. There's simply nothing like it.

But like all good things, it must come to an end. And as the holiday season makes its exit once again, it often leaves consequences in its wake. Whether it's a few pounds, a few new bills, or a whole wave of toys or gifts that now need a place in your home, nearly everyone has something to take care of once the holidays are over.

Since I'm action-oriented, I took the time to compile an action plan full of activities that may help you recover from holiday overload, or make things easier next year. Call it an after-Christmas-to-do list if you will, because everyone loves to-do lists, right?