¡Hola, todos! For the past month, I've been on the road — first at a conference of financial bloggers in Chicago, and then trekking through the Peruvian and Bolivian Andes. For most of this time, I've been without an internet connection. It's tough to blog about money when you're trekking to the top of a 5350-meter (17,650-foot) mountain!

The adventurous part of my trip is over. I'm back with the ten million residents of Lima, Peru, and my wife will soon join me. We'll spend a couple of weeks doing the tourist thing while our brave housesitter herds our five cats.

Now that I'm back in the world of reliable telecommunications, it's time for me to share a few of the things I've seen, to give a glimpse of what life is like in this corner of South America. 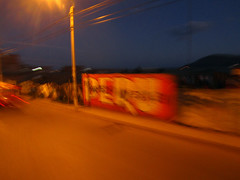 For me, the most difficult adjustment has been coping with the constant chaos. As Kris will attest, I'm not the most ordered and organized person in the world. But I am American. As Americans, we're used to schedules and systems and routine. Those notions don't always work here. Sometimes they don't work at all. I've had to relax and just go with whatever happens. (Our guides often joke about “Peruvian time” — schedules are approximate.)

The most obvious chaos is the traffic. I'm sure there are traffic laws in Peru and Bolivia, but they're not really followed. Instead, there's a complex dance between cars, buses, and pedestrians. It's frightening at first, but exhilarating once you surrender and join the fun. But that's not the only chaos.

For instance, on the night before we crossed from Peru into Bolivia, our guide came to me. “I have bad news,” said Pepe Lucho. “Americans need a visa to enter Bolivia. That means you need to fill out some paperwork. You also need passport photos. And $135 US. We leave at 7am.” It was 9pm.

No worries. I grabbed one of my new friends, and we headed into Puno's crowded streets. Though it was a Wednesday evening, the local university students were parading through town, beating drums, blowing trumpets, and dancing. We never figured out why, but the celebration lasted for hours. Stephen and I threaded our way around the throng of partiers to find a bank machine. We also located a place that would take passport photos. Using my rudimentary Spanish — I've only been learning since the middle of June — I paid seven soles (about $3 US), climbed a rickety staircase, and had my photo taken in a closet. Five minutes later, we were back at the hotel ready to go.

But the next morning, Pepe Lucho had more bad news. “Your photos are on a white background. The Bolivians want them on a red background. It's crazy! But we don't have time. Let's just use these and see what happens.”

What happened was that the men at the border post didn't even want the photos. The shack was crowded and people were pushy and they were frustrated with my Spanish skills (or lack thereof). Muttering to each other, they took my money ($140 US — no change), ignored my photos, and rushed me through the visa process. What we had feared might take an hour only took three minutes. I'm fairly certain that things weren't done “by the book”, but I'm not complaining. I was in Bolivia, on my way to the Condoriri Real.

Having Enough
By U.S. standards, much of Bolivia and Peru might seem poor and unkempt. It's easy to lapse into judgements based on our own cultural values, but I worry that's a mistake. Yes, trash litters the streets. Yes, there are lots of unfinished projects everywhere you look. Yes, the work ethic is different. But different doesn't mean wrong.

“The Aymara people are not lazy,” cautioned Freddy, our Bolivian guide, as our boat motored across Lake Titicaca. The Aymara are an indigenous group predominant on the Bolivian side of the lake. “They don't live like this because they're lazy. It's not that they don't want to work. They live like this because they have Enough.” I grabbed my pen and notepad and began to write. 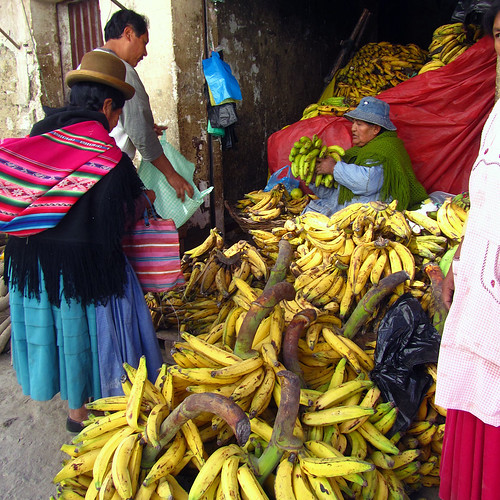 “If you go to a market and try to buy all the fruit from the vendor, she won't sell it to you,” Freddy explained. “She'll say, ‘If you buy all of this, what am I going to do for the rest of the day?' There's more to the transaction than money.”

“Plus, the Aymara hold onto what they earn. They save. Sometimes they're called the jews of the Andes. You'll see an Aymara work with basic tools and what looks like very little wealth. But then they go to the bank and they have a lot saved. In fact, often they work for months, living with nothing, in order to spend extravagantly for four or five days. They'll spend all their money quickly on a fiesta, to throw a party for friends and family.”

“Why?” asked somebody in our group. “Why do they spend it all at once?”

Note: “Are you a journalist?” Freddy asked me later. “I noticed you took notes about what I was saying.” I told him that I'm a professional blogger, and that piqued his interest. Freddy was a journalist for many years, and even wrote a satire about Bolivian history. Now he writes blogs of his own to document life as a tour guide.

Cost of Living
Wages are low in Bolivia, but so is the cost of living. People are poor financially, especially when compared to countries like the United States, but they eat well. “For the cost of one glass of Coca-Cola in a Swiss restaurant, I could buy twelve liters here,” Freddy told us at lunch one day.

And there's no question that the cost of living is different. At the moment, the exchange rate is roughly 6-2/3 Bolivianos (Bs) to one U.S. Dollar. That's fifteen cents per Boliviano. Or, as I liked to think of it, 20 Bs to $3. And twenty Bolivianos goes a long way.

Here are some examples: 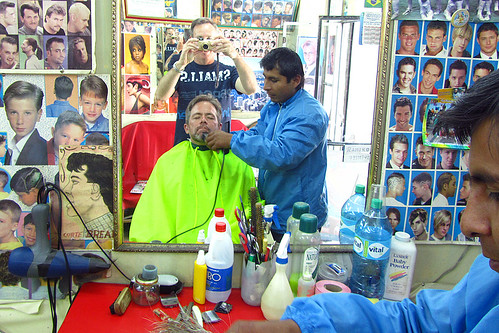 Getting a haircut and a shave in La Paz, Bolivia

Here's another example: While wandering the markets of La Paz, my new friend Stephen found a woman weaving small bracelets with individual names on them. “I want to get one of these for my son James,” he said. After waiting twenty minutes and paying five Bolivianos (about 75 cents), Stephen had his hand-made bracelet.

The Cost of Travel
Our Bolivian guide had done some traveling of his own. Freddy has been to England, Denmark, Switzerland, and Germany. “With the money I spent on travel, I could have bought a new car here in Bolivia. But I bought a used Volkswagen instead,” Freddy told me as we walked to the top of Isla del Sol in Lake Titicaca. (There are a surprising number of old VW Bugs floating around the country.)

“I think that was the best investment I made in my life. By traveling, I learned many things.”

And while some of you will groan to hear me sing this song once again, I agree. Though cheap relative to my Africa trip last February, my South American adventure is still costing me $150 a day — not including airfare. To me, this is a bargain. The past three weeks have been pure magic. 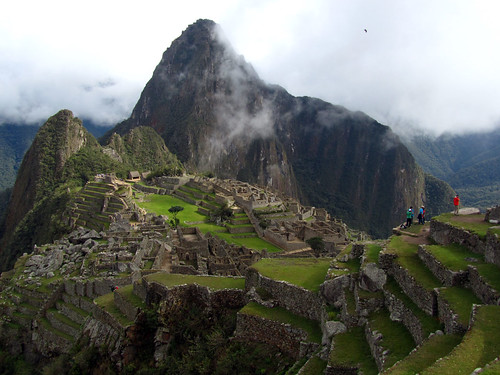 Machu Picchu, one of the wonders of the world

In October, I've walked more than 120km across beautiful Peruvian mountains, over the high plains of Bolivia, and through vibrant cities teeming with people. I've chewed coca leaves, sipped corn juice, and eaten alpaca. (And guinea pig — guinea pig is delicious!) I've traveled with a group of intelligent, hilarious Australians. I've had conversations with other travelers from around the world.

Right now, at this point in my life, this is money well spent.

I write a lot about conscious spending,about how to track your financial health and maintaining your credit report also about cutting back hard on the things that don't matter so that you can spend on the things that do matter. This notion may seem tired or mundane. It's not. The deeper I get into the third stage of personal finance, the more I realize that conscious spending is what it's all about.

Learn what you love. Manage your money so you can spend on whatever this might be. Ignore everything else. Do this, my friends, and you will have all the wealth you need. 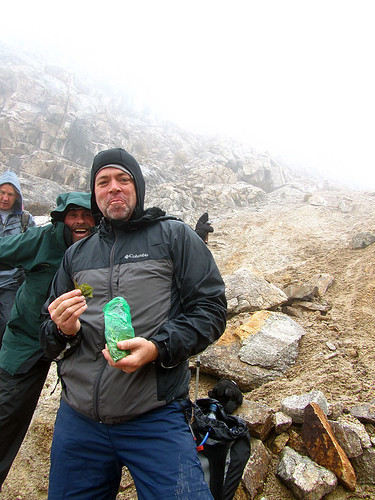 Crossing a 4950-meter pass near Salcantay — chewing coca leaves
Reminder: You can read more about my adventures at Far Away Places.

There are 77 reader responses to "Saving and Spending in South America".