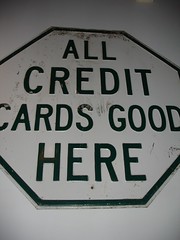 Last week I had lunch with Hardy, a Get Rich Slowly reader here in Portland. We chatted about life (and personal finance) over burgers and fries. He generously offered to pay the bill. When the waitress returned with the credit card slip, she asked to see his driver license.

“What was that all about?” I asked.

“Asking for my ID?” said Hardy. I nodded. He flipped over his credit card and showed it to me. He'd written SEE ID where his signature ought to be.

“Some of the time,” he said. “It gives you an idea of which places are paying attention. But not every place will accept it. It's technically against the rules because the card has to be signed. Plus, businesses aren't really allowed to ask to see your ID.”

“What do you do if they refuse to take your card?” I asked.

“I carry a backup,” said Hardy. “This is my main card. My back-up card has my signature, but I rarely have to use it. The only place that I know will refuse the main card every time is the post office. I have to use a signed card there.”

I was intrigued by this attempt to thwart identity theft, so when I got home I asked my Twitter followers:

My lunch companion doesn't sign credit cards, but writes “SEE ID” on the back instead. Have you ever seen this?

I was shocked by the number of replies. Apparently, I've been living under a rock. Over 100 Twitter users replied to share their experiences with this tactic. Here's what I learned:

So, is writing “SEE ID” instead of signing your credit cards a good idea? It's hard to say. Technically, it's against the rules, and few merchants seem to notice, but it gives many folks a warm, fuzzy feeling. Plus, if you're worried about your card being rejected, you can always do what Hardy does: carry a back-up to use at the Post Office.

Here's a final word of caution: Jake Billo notes that if you present both your credit card and driver license to a skilled criminal, you're just giving them more ammunition to destroy your life. He warns that this practice may actually increase your risk of identity theft.

For more tips on protecting your ID, check out my post on how to prevent identity theft. You might also be entertained by the credit-card prank over at Zug. Photo by szlea. If you'd like to help with future GRS posts, follow me on Twitter!

There are 154 reader responses to "Should you write ‘SEE ID’ or sign your credit cards?".