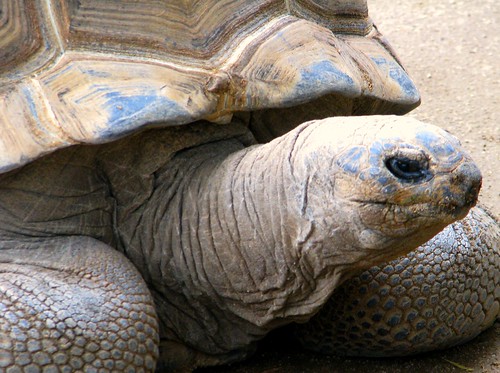 Last week, Robert Brokamp lamented about his not-ready-for-prime-time bikini body, asking GRS readers “whether it might make sense occasionally to engage in some extreme fiscal or physical fitness in order to see bigger results sooner, which could serve as encouragement to keep going.”

Brokamp's post was highly entertaining to be sure, but I immediately fired off an e-mail to J.D. asking if I could answer his question in a follow-up post. At GRS, we recognize the importance of getting rich slowly, doing the boring stuff day-in and day-out to achieve financial success. I believe weight loss is no different.

We really want to believe there's a magic bullet, but sadly, weight loss is as unsexy as loading up on veggies and getting some exercise everyday.

When I hear people talking about the latest fad diet, it reminds me of the people that talk about what they'd do if they won the lottery — it's easier to daydream than to hunker down and do the work. That's why people are quick to defend their 500-calorie-per-day diets and hCG injections or to pass around studies about how get-slim-quick strategies can yield lasting results. But you lose weight on the nutty hCG diet because you are consuming too few calories, and a little digging into the linked study that seems to champion rapid weight loss shows that the term “rapid” is used to describe participants who lost an average of 1.5 pounds per week, which isn't fast at all. It's a realistic and healthy goal for the average person to lose 1-2 pounds per week.

With weight loss, as with personal finance, don't believe the hype. If it sounds too good to be true, it probably is.

Where personal finance and dieting differ
Brokamp wrote, “I tried this once before with my diet, cutting out everything except vegetables and lean proteins. That included no more caffeine or any kind of sugar. After a few days, I didn't feel so great — kinda like I had the flu.”

Where diet and personal finance differ is that depriving your body directly affects your health. The Weight-control Information Network reports that “many patients on a [very low calorie diet] for 4 to 16 weeks report minor side effects such as fatigue, constipation, nausea, or diarrhea.” While those conditions usually improve, CNN reports some more serious side effects that make some nutritionists dread bikini season. According to the article, studies show that crash diets (under 1,200 calories per day) can lead to the following:

Maybe doing it just once won't harm you, but since studies show that crash diets won't work, chances are that next summer you'll be looking for another quick fix to lose 20 pounds (or more) again.

Psychological Boost: Fact or Fiction?
Do quick results give you the motivation to stay on course? Or as Brokamp asks, “Wouldn't I see more results by severely limiting the calories and increasing the exercise, which would inspire me to keep going and stick with it?”

It does make sense. If you look great, you'd be crazy not to maintain that, right? But it's statistically proven that you'll regain the weight, and maybe even some extra, so that seems unlikely to be sufficient motivation. And some experts believe that losing and regaining is bad for your psychological health, making you feel like, well, a hopeless failure. Studies on the psychological effects are inconclusive, however, with some linking weight cycling to increased psychological distress and dissatisfaction, and others showing no relationship.

A Life Plan that Works
I'm pretty passionate about weight loss and personal finance. I gained weight during college (on a barely 5'2″ frame) that I finally lost for good five years ago. I was in credit card debt from my freshman year until two years ago. Before that, both the scale and the credit card balance yo-yoed for years. I finally stopped looking for quick fixes, and that's when I found success. So, my advice to Brokamp is to consider J.D.'s original twelve core beliefs about money (he just keeps making that list bigger, doesn't he?), with a weight loss twist:

Finally, when it comes to paying off debt, it might make sense to cut back for some big wins. But you probably didn't get to where you are now right out of the gate.

When my husband and I got serious about debt, he sold his motorcycle, I quit buying clothes for sport, and we started to pack our lunch everyday. That seemed drastic to us, but since then we've found many more ways to save, implemented over time. Crash dieting isn't akin to selling some Stuff and building your online savings account or starting an emergency fund; it's more like trying to go from compulsive spender to Frugal Babe overnight. Not even Frugal Babe did that!

Sadly, successful weight loss, like good personal finance habits, is quite boring. But the payoffs are huge.

There are 73 reader responses to "Slow and Steady: More Thoughts on Physical and Financial Fitness".