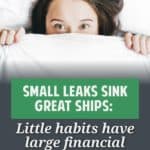 If you've spent any amount of time reading money blogs over the past fifteen years, you've heard of the latte factor. In fact, you're probably sick of hearing about it.

This concept — put forth by David Bach in his best-selling The Automatic Millionaire — is based on the idea that daily spending on small things has a big impact on your future wealth.

“We don’t even realize how much we're actually spending on these little purchases,” Bach writes. “If we did think about it and change our habits just a little, we could actually change our destiny.”

The latte factor is nothing new. More than 200 years ago, Benjamin Franklin cautioned, “Beware of little expenses. A small leak will sink a great ship.” Jesus urged his disciples to not let anything go to waste. The stoic philosopher Seneca the Younger wrote, “With parsimony a little is sufficient. Without it nothing is sufficient. But frugality makes a poor man rich.”

Yes, the best way to spend less is to cut back on the big stuff. Yes, it's important to earn more money. But frugality is an important part of personal finance too.

Today, I want to share a real-life example of how small, daily habits can have a powerful effect on your ability to build a wealth snowball.

A Tale of Two Brothers

I've been back at the box factory for over two months now. It's been fun. (It's also been hindering my ability to work on Get Rich Slowly, but that's another story.)

One of the best parts about going back to work has been interacting with other people. Working from home is a lonely, lonely endeavor. I've enjoyed reconnecting with my brother and cousin and our company's employees.

The daily chit-chat has proved a rich source for future article ideas. As people talk about their daily lives, money is a frequent topic. Plus, we all observe what our co-workers are doing and how their choices affect their financial health.

Here's an example of how a seemingly innocuous choice is costing one of our workers a couple of thousand dollars per year.

On the surface, this isn't a big deal, right? Gus likes to sleep in, so he's willing to sacrifice $100 each month to do so. In reality, I think Gus is paying too much for a few minutes of sleep each day.

The High Cost of Sleep

Here's how much sleeping in actually costs Gus.

First, there's the on-time bonus itself. Because he's always a few minutes late for work, Gus is giving up $1200 per year. (In reality, Gus doesn't miss his on-time bonus every pay period. For the purposes of this example, however, let's pretend he never gets it.)

Less obvious is the cost of transportation.

There are approximately 250 work days every year (once you subtract for two weeks of vacation). Gus and Joe drive twelve miles each way to and from work. That's an annual total of 6000 miles commuting — 6000 duplicated miles, in this case.

Gus drives a paid-for 2004 Ford Focus, which means his driving costs aren't as bad as they could be. According to the American Automobile Association's 2018 Your Driving Costs brochure, the Ford Focus is a small sedan that costs approximately 15.26 cents per mile to operate. Ownership costs (insurance, licence, registration, etc.) run roughly $1781 per year. Assuming Gus drives 12,000 miles per year (which seems reasonable), then ownership costs are about 14.84 cents per mile. All told, driving costs Gus around 30 cents per mile.

Assuming that Gus commutes 6000 miles every year at 30 cents per mile, he spends $1800 annually to get to and from work. If Gus were to carpool with his brother each morning, he'd probably split the costs of driving. So, let's say his sleep habit costs him $900 in annual commuting costs.

To calculate the long-term cost of his sleep habit, I ran the numbers through this latte factor calculator. Assuming Gus gives up $5.75 per day (which is $2100 divided by 365 days in a year) and assuming he could have earned a 5% return on his money, then he's sacrificed $71,848.69 over twenty years.

I'll admit that $2100 per year isn't big money. Maybe Gus feels it's worth sacrificing this much in order to sleep a little later each morning. If so — if this is a conscious decision — then great.

I hope it's clear that the latte factor isn't really about coffee. And my analysis of Gus' sleep habits isn't really about sleep. When we talk about small choices like these, we're actually talking about opportunity costs and conscious spending.

I should also note that I'm not trying cast stones here. I'm the last person who should mock somebody for choices like this. In fact, my primary financial goal for 2019 is to plug all of the “small leaks” that have been sinking my own financial ship! But I think it's because of my own poor habits that I'm acutely aware of how the habits of others affect their financial future.

So, what are some ways to fight the latte factor — whatever that might mean to you and your life?

Ultimately, my goal for myself — and for you — is to spend on the things that matter most in my life. By doing so, we're using money as a tool to build happy lives. When we fail to do so, it's as if we're mindlessly wielding money as a tool to casually chip away at our present and future well-being.

What we really want to do, I think, is to fund our happiness in the present while working to build a wealth snowball, a pile of cash that will allow us to live happy, golden years.

There are 31 reader responses to "Small leaks sink great ships: How little habits can have large consequences".