Some personal finance advice is just plain ridiculous. I'm talking about the kind of advice that's great for filling up a webpage but that had neither saved nor made anyone money ever. Or maybe you could follow it and save money, if you wanted to hate your life.

I'm not entirely innocent, I admit. I'm sure I've espoused my share of well-meaning-yet-impractical advice in the last seven years. (Okay, stop searching the archives right now!) But I do try, people. I really do. 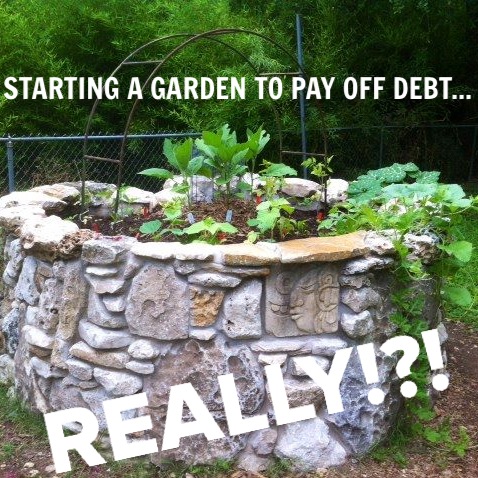 So today I wanted to talk about one of these questionable nuggets of advice that I frequently come across: Pay off debt faster by starting a garden.

I think this is a terrible idea. I've read it over and over on too many sites to count, and in my head I always think, “Really!?!” (And in my head, it sounds just like the “Saturday Night Live” segment with Seth Meyer and Amy Poehler, which I'm going to blatantly rip off in this post.)

So, starting a garden to pay off debt? Really!?!

And here's why I'm highly skeptical that it can work.

So starting a garden has zero start-up costs? Really?

Okay, so let's pretend you have a plot of land or at least room for some pots. This advice is saying that you can actually come out ahead by starting to grow your own food versus buying it from the grocery store. It also implies that you're a beginner at gardening, since a gardening pro who has the space to garden is probably already doing it.

So if you're new to gardening, you've got a lot to learn. I'm a novice gardener, and in addition to all the free information on the web, I've bought a few books specific to my region. For instance, when should you start tomato seeds when you live in Central Texas? Knowing stuff like that increases your odds of success. I'd estimate that I've spent about $40 on books so far. (And sure, you can borrow them from the library, but when the leaf-footed bugs were attacking my cherry tomato plant, I sure was glad to have my reference books nearby.)

Speaking of start-up costs, if you're a novice, you're probably going to have to spend some money on things like tools, pots, soil, soil amendments, mulch, and fertilizer — not to mention plants and seeds. There are some low-cost ways to take care some of these things, but I don't see how you can get around buying things like a shovel and some pots and the actual plants. That stuff adds up quickly.

And really, all new gardeners are successful right from the start?

If you're new to gardening, you're going to make mistakes, or at least not do everything the most optimal way. You can expect to learn a lot in the beginning about soil amendments and pruning and all the ways to maximize yield (and therefore savings on grocery bills). I've also been learning which varieties produce the most and which produce very little or require more care.

Newbies also will learn about garden pests in the first year. Pests like the squash vine borer, which will completely destroy your fairy tale pumpkin vine before the pumpkin you've been excitedly waiting for can mature (I've declared war). So if I'm looking at gardening solely by the numbers, I lost money on that one. I also had a raccoon jump into my keyhole garden (pictured above) and destroy my Bulgarian carrot pepper plant. Not to eat it, but just to be a little jerk, I guess.

If you're digging your way out of debt, is gardening really the best use of your time and resources?

Gardening is time-consuming. In addition to the reading and researching I've done, there have been many hours spent shopping in nurseries, creating garden beds, weeding, watering, pruning, etc.

I have no idea exactly how many hours I've spent on my garden; but as longtime readers will recall,& GRS had a garden project series in which J.D. and his then-wife Kris tracked their time, expenses and harvest for a year. From January to May, they spent about $300 and 20 hours of time, and hadn't harvested anything yet, since the seasons have a say-so in this gardening thing too.

But the weather warmed, things started growing, and they finished the year with $606.97 in harvest and $318.43 in expenses. That's about $288 in profit. So if we divide their profit by the 60 hours of work total, they worked for $4.80 per hour. That's not even close to minimum wage.

Also keep in mind that they were already gardeners who had learned (and bought) a thing or two before that year-long project began. Your results will vary — I know mine sure have! I haven't diligently tracked my time, expenses, and harvest, but I am certain I'm nowhere near $4.80 per hour.

So in summary, this “start a garden” tactic will probably require $300+ in start-up costs, hours of work, and any payoff is uncertain and unlikely. And that's a good way to pay off debt faster? Really!?!

I contend that most new gardeners will not see any savings with gardening. Which isn't to say that it's impossible — there are plenty of gardeners who grow the majority of their produce. I hope to get to that point too. But it takes time, experience, and resources to get there.

I garden not in hopes of some big reduction in my grocery bill, but simply because I like it. I like getting to know my half-acre of land. I like having a reason why I have to get outside every day. I like growing aubergines and making aubergine caviar, knowing it all came from right outside my door. As Kris wrote in her December 2009 garden update, “For me it's a relaxing hobby, a great way to spent my summer evenings and weekends connecting with my piece of the planet.”

So I encourage anyone to start gardening if they have the inclination. But not if they're trying to pay off debt and hoping to save money on groceries. I mean, really.

Readers, what do you think? And what other bits of personal finance advice do you take issue with? Let me know in the comments!

There are 87 reader responses to "Starting a garden to pay off debt: Really!?!".