I had lunch with Sabino yesterday. He's my accountant — but he's also my friend (and a loyal Get Rich Slowly reader).

I told Sabino about how our house has been a money pit over the nine months since we bought it. I told him how much fun I've been having with Get Rich Slowly since I bought it back, and about how much work it has turned out to be to get the site renovated.

Sabino told me about his businesses (he doesn't just own the accounting firm, but bits and pieces of several other companies too) and about his kids (who, to the surprise of both of us, are all teenagers now). He's worked hard all of his life to give his family a solid future, and now — at age 48 — all of his dreams seem to be coming true.

I've shared Sabino's story several times in the past. But for those who are unfamiliar, here's a synopsis.

Sabino's family moved to the United States when he was ten years old. They were poor and didn't speak English. But from an early age, Sabino wanted to be part of the American Dream. He learned English, worked hard, and put himself through college.

After Sabino got married, he and his wife Kim set financial goals. Their chief aim was for Kim to stay home and raise a family. So, while our friends were buying new homes and new cars, Sabino and Kim rented a mobile home in the country for $200 a month and paid $950 cash for a 1982 Honda Accord. They both worked full-time jobs, but they lived off Sabino's income alone and used Kim's salary to repay $35,000 in student loans.

“We made sacrifices,” Sabino says. “We made these choices because of the goals we had. We knew what we were working for, and we were happy to do it.” (Back then, I didn't understand their choices and sacrifices; twenty years later, it all makes sense.)

Today, Sabino is a successful business owner while Kim stays home to raise their three children, just as they planned. Because of their diligence, they now own a nice home in the country (they paid off the mortgage last spring) and new cars that are fully paid for. By staying focused on their purpose, they've been able to build the life they always dreamed about.

Yesterday over lunch, we talked about the qualities that lead to success. As I often do, I complained about the current narrative that the mass media is trying to sell Millennials: their lives are tough because the economy sucks and the deck is stacked against them.

“I just don't believe it's true,” I said. “The economy doesn't suck. And now might be the best time in history to be alive. Besides, even if this story were true, so what? If you're dealt a crappy hand, it's up to you to make the best of it.”

Sabino nodded in agreement. “I don't like that sort of thinking either,” he said. “But it's nothing new. Our culture always has a story they want to tell you about yourself. When I came to this country, for instance, everyone — my friends, my teachers, my family, everyone — had expectations for me and what my life would be like.”

Sabino is one of the inspirations for my financial philosophy, and the reason is obvious. He's lived it! (And he continues to live it.)

For more on Sabino's story, check out this interview he did for the Oregon Multicultural Archives at Oregon State University.

My lunch with Sabino reminded me of a New Yorker article from a couple of years ago. In the piece, Maria Konnikova explored how people learn to become resilient.

She cites the work of Norman Garmezy, a developmental psychologist from the University of Minnesota. Garmezy, who died in 2009, spent more than forty years researching the qualities that lead to success and prevent mental illness. The quality that seemed to matter most? Resilience, the ability to surmount life's slings and arrows instead of succumbing to them.

Writing about the work of another resilience researcher, Emmy Werner, the author says:

What was it that set the resilient children apart? Because the individuals in her sample had been followed and tested consistently for three decades, Werner had a trove of data at her disposal. She found that several elements predicted resilience.

Some elements had to do with luck: a resilient child might have a strong bond with a supportive caregiver, parent, teacher, or other mentor-like figure. But another, quite large set of elements was psychological, and had to do with how the children responded to the environment.

From a young age, resilient children tended to “meet the world on their own terms.” They were autonomous and independent, would seek out new experiences, and had a “positive social orientation.” “Though not especially gifted, these children used whatever skills they had effectively,” Werner wrote.

Perhaps most importantly, the resilient children had what psychologists call an “internal locus of control”: they believed that they, and not their circumstances, affected their achievements. The resilient children saw themselves as the orchestrators of their own fates. In fact, on a scale that measured locus of control, they scored more than two standard deviations away from the standardization group.

This latter statement sounds like statistical gobbledygook but it's important. Werner's research indicates that resilient children — those who are able weather the storms of life — score in the top 2.2% when measuring locus of control. Again: Successful kids believe they control their own fate.

Psychologists are convinced that resilience is a fundamental key to success. But where does it come from? Can it be learned? Why do some people respond better to stress than others? George Bonanno of Columbia University believes it all boils down to perception. From the New Yorker article:

Every frightening event, no matter how negative it might seem from the sidelines, has the potential to be traumatic or not to the person experiencing it…

Take something as terrible as the surprising death of a close friend: you might be sad, but if you can find a way to construe that event as filled with meaning—perhaps it leads to greater awareness of a certain disease, say, or to closer ties with the community—then it may not be seen as a trauma. (Indeed, Werner found that resilient individuals were far more likely to report having sources of spiritual and religious support than those who weren’t.)

The experience isn’t inherent in the event; it resides in the event’s psychological construal.

Konnikova concludes that yes, resilience can be learned, and the best way to do it is to shift from an external locus of control to an internal one. She writes: “Not only is a more internal locus tied to perceiving less stress and performing better but changing your locus from external to internal leads to positive changes in both psychological well-being and objective work performance.”

The Stories We Tell Ourselves

These ideas are the foundation upon which the Get Rich Slowly philosophy is built. To achieve your financial goals, you must accept responsibility for your choices and decide that you are in control of your fate. You are the boss of your own life.

Generally speaking, no one story is more true than any other. Each tale is simply a different way of viewing our life. If one story makes us unhappy or uncomfortable, it's possible to tell ourselves a different version of the story, one that creates a more positive experience. (It's like the blind men and the elephant.)

Choose Your Own Adventure

A few years ago, I had a conversation with my friend Tyler Tervooren. He and I were both going through a lot of life changes, and we were each trying to re-write parts of the stories we'd been telling ourselves. Tyler shared a technique he was using to change his belief systems.

“I have a list of qualities I want in myself,” he told me. “I've written them on index cards in a specific format and I read these to myself every day.”

“Well,” he said, “one card might say, ‘I am the sort of man who always keeps his promises.' Another might say, ‘I am the type of man who makes exercise a priority.' I have about twenty of these cards, and I review them every day. This is a way for me to stay focused on what's important to me, and to remind myself of my values.”

What a great idea! 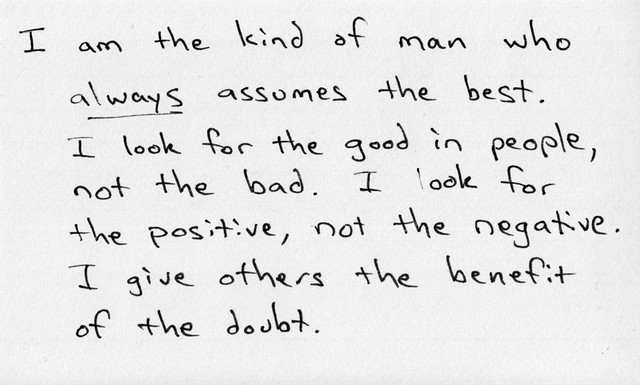 The bottom line is this: If you don't like the story you're living, only you can change it. You are the author of your own life. You didn't write the beginning of the story, but you have the power to choose the ending. In so many ways, life is like a Choose Your Own Adventure book. Choose an adventure you love instead of one that makes you unhappy.

I know, I know. All of this is easier said than done. Once you're thirty or forty or fifty years old, you've had decades to tell yourself certain parts of your story. You may have written yourself into a corner. Changing plotlines can be difficult. Still, it is possible — and nobody else is going to change the storylines for you. It's up to you to live the story you want.

There are 11 reader responses to "The stories we tell ourselves".