This is a guest post from Jeff Yeager, author of the newly-published The Cheapskate Next Door. Yeager calls himself the Ultimate Cheapskate — and his wife agrees. Yeager is also a contributor at Wise Bread and on the Early Retirement forums. 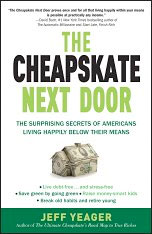 “Sure, we could afford to spend more, but why would we? It wouldn't make us any happier.” — Those are the words I've spent the last two-and-a-half years traveling the country to hear. It's a simple but rare statement, given that nearly half of all Americans say that they literally live paycheck-to-paycheck and have little if any savings.

How can some people live not only within their means, but substantially below their means — even when their incomes are often less than the national average? And here's the biggest question of all: How can some of those same people insist that they're happier — joyous, really — because of their thrift and frugality?

I traveled thousands of miles — nearly 3,000 of them by bicycle! — and surveyed more than 300 of my beloved “Miser Advisers” to find the answers. In my new book, The Cheapskate Next Door, I share what I discovered about people and families — many of them just like you — who not only know how to stretch their money, but who are more content and happier because of it. The book also includes hundreds of their practical, money saving tips — ideas that anyone can use every day.

Some of what I found may not surprise you. These frugal folks:

But other findings surprised even me, The Ultimate Cheapskate.

For example, only about 10% of the thrifty people I talked to have a written household budget (“we live our budget — it's second nature — we don't waste time writing about it,” one cheapskate said). While they have savings in the bank, less than 15% have a formal “emergency fund” (“an emergency fund is for people who don't have their financial house in order otherwise,” another cheapskate said). And more than nine out of ten say that they think, worry, and stress-out about money less — not more — than their non-cheapskate peers.

The Cheapskates Next Door are 100+ times more likely to have a dog or cat adopted from a shelter than one purchased from a pet store, are far more likely to own a crock-pot (or several) than an IPod or flat-screen TV, and they divorce at less than half the national average.

These aren't your miserable, Scrooge-like cheapskates. These are folks who know what's important in life, and they skip the rest. Here's a glimpse inside the mind of the Cheapskates Next Door:

While most of the cheapskates I surveyed are lifelong devotees — having practiced frugality since long before the recent recession made it more fashionable — I kept asking myself while I was writing the book whether or not thrift is truly here to stay, particularly for the nouveau cheap. Will conspicuous consumption spring back to life faster than you can say “bailout” or “liar loan?”

I'm not at all confident about the answer. But the very last question in my survey was a hypothetical: Someone drops a million bucks on you tomorrow, how would it change your life? More than 9 out of 10 cheapskates, in so many words, said that it wouldn't change their lifestyles in the slightest.

“Honestly,” one couple told me, “it would just serve to reinforce what we have already learned — that we have Enough right where we are, and we realize that is a gift most people don't ever choose to receive.”

J.D.'s note: Though I haven't had a chance to read The Cheapskate Next Door, I liked Yeager's earlier book, The Ultimate Cheapskate's Road Map to True Riches [my review].

Also: By a happy coincidence, Mr. Jeff Yeager, the Ultimate Cheapskate, passed through the Portland area on his cross-country bicycle book tour yesterday. He and I spent a couple of hours cycling through the Oregon countryside while chatting about frugality and other related subjects. Here's a poor-quality photo of us crossing the Willamette River by ferry: 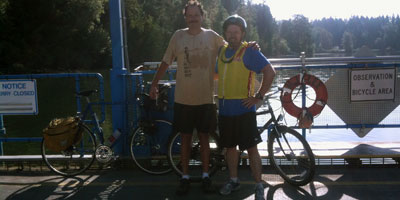 Dig my gigantic helmet and my awesome reflective vest. We sure look like a couple of dorks!

There are 98 reader responses to "Surprising secrets of The Cheapskates Next Door".