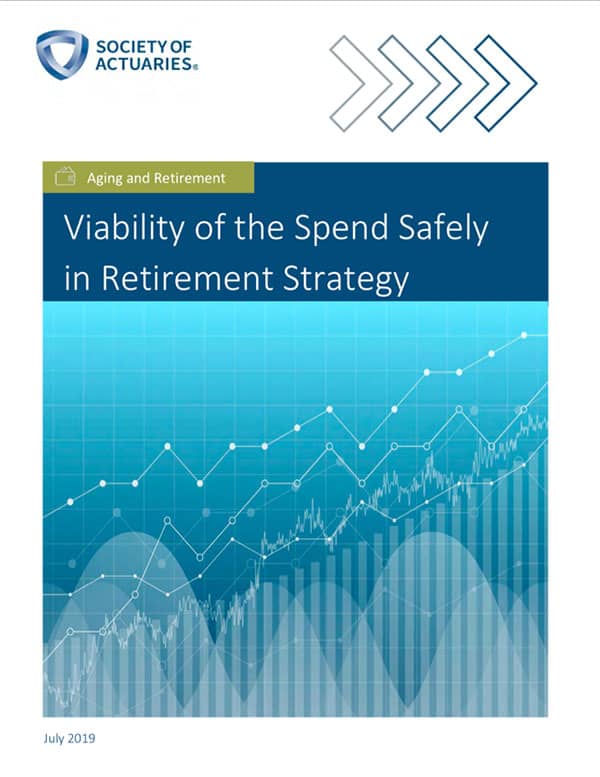 Last month, the Society of Actuaries (a group I was born to belong to!) published a mammoth (84-page) report entitled “Viability of the Spend Safely in Retirement Strategy”. Despite its opaque title, this report (written by Steve Vernon, Joe Tomlinson, and the estimable Wade Pfau) contains some interesting info about planning for retirement income.

On the surface, this report's advice seems stupid simple: To optimize retirement income, delay Social Security and make the most of required minimum distributions from tax-advantaged accounts. Isn't this pretty much what most of us plan to do? Maybe so, but I doubt that anyone else has crunched the numbers like this.

Plus, this strategy provides a specific plan for folks who haven't considered how to approach retirement income. As the authors note, most retirees fall into two camps.

The Spend Safely in Retirement Strategy is useful for both groups. It shows the specific steps needed to maximize retirement income. Those steps might seem obvious to those of us who read and write about personal finance every day, but they are not obvious to our family and friends.

Here's a quick overview of the Spend Safely in Retirement Strategy (or SSiRS).

The Spend Safely in Retirement Strategy

Vernon, Tomlinson, and Pfau introduced the concept of the SSiRS in their 2017 report through the Stanford Center on Longevity: “Optimizing Retirement Income by Integrating Retirement Plans, IRAs, and Home Equity”. (You can download a PDF of the paper from Stanford.)

“This strategy has a significant advantage,” they wrote. “It can be readily implemented from virtually any IRA or 401(k) plan without purchasing an annuity.”

That 2017 publication was mostly theoretical. There wasn't a lot of info on how to approach their strategy from a practical perspective. This new project is more about actual implementation.

1. Optimize expected Social Security benefits through a careful delay strategy; in this case, many middle-income retirees may have all the guaranteed lifetime income they need.

The authors stress that the SSiRS is meant to be a baseline strategy, a starting point from which retirees (and/or their financial advisors) can build a more customized plan. It's like a basic bread recipe that yields good results every time. If you want to make fancier bread, you're free to do so. But you don't have to.

Last week, I wrote about the problem with retirement spending: How much should you spend during retirement? If you spend too much, you run the risk of depleting your savings. But if you spend too little, you're sacrificing the opportunity to make the most of your money, to “drink life to the lees”.

One of the guiding principles in retirement planning is that there's a “safe withdrawal rate”, a pace at which you can access your investments so that your nest egg will last for thirty years (or longer).

For simplicity's sake, a lot of folks talk about the “four-percent rule”: Generally speaking, it's safe to withdraw 4% from your investment portfolio every year without risk of running out of money. (This “rule” manifests itself here at Get Rich Slowly when I say that you've reached Financial Independence once you've saved 25x your annual spending — 33x your annual spending if you want to be cautious.)

Today, I want to take a closer look at the four-percent rule for safe withdrawals — then explore why the theory behind it doesn't always mesh well with the reality of our daily lives. 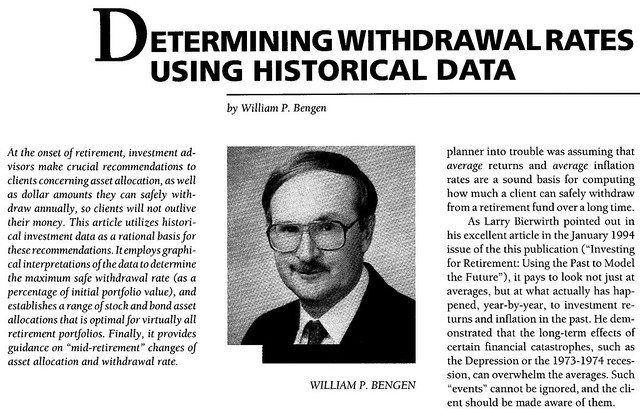 Last August, William Bengen (who first proposed the 4% rule in a 1994 article), participated in an “ask me anything” discussion at the financial independence subreddit.

Here's the top question and answer from that thread (with additional formatting for readability):

Question
Is the 4% rule still relevant in today's economy? What safe withdrawal rate would you recommend for someone planning for longer than 30 years of retirement?

The 4.5% is the percentage you could “safely” withdraw from a tax-advantaged portfolio (like an IRA, Roth IRA, or 401(k)) the first year of retirement, with the expectation you would live for 30 years in retirement. After the first year, you “throw away” the 4.5% rule and just increase the dollar amount of your withdrawals each year by the prior year's inflation rate. Example: $100,000 in an IRA at retirement. First year withdrawal $4,500. Inflation first year is 10%, so second-year withdrawal would be $4,950.

Now, on to your specific question. I find that the state of the “economy” had little bearing on safe withdrawal rates. Two things count:

Both factors drive the safe withdrawal rate down.

My research is based on data about investments and inflation going back to 1926. I test the withdrawal rates for retirement dates beginning on the first day of each quarter, beginning with January 1, 1926. The average safe withdrawal rate for all those 200+ retirees is, believe it or not, 7%!

However, if you experience a major bear market early in retirement, as in 1937 or 2000, that drops to 5.25%. Add in heavy inflation, as occurred in the 1970's, and it takes you down to 4.5%. So far, I have not seen any indication that the 4.5% rule will be violated. Both the 2000 and 2007 retirees, who experienced big bear markets early in retirement, appear to be doing OK with 4.5%. However, if we were to encounter a decade or more of high inflation, that might change things.

If you plan to live forever, 4% should do it.

That's some helpful information, and it comes directly from a man who has been researching this subject for 25 years. Obviously, it's no guarantee that a four-percent withdrawal rate will hold up in the future, but it's enough for me to continue suggesting that you're financially independent once your savings reaches 25 times your annual spending.

But here's the catch — and the reason I'm writing this article: From my experience, spending in early retirement is not a level thing. It fluctuates from year to year. Sometimes it fluctuates wildly. END_OF_DOCUMENT_TOKEN_TO_BE_REPLACED 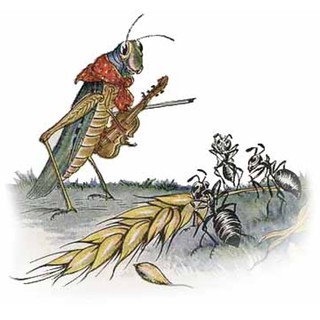 I spend a lot of time talking with people who have retired early or are otherwise financially independent. From a purely anecdotal point of view, I'd say most of these folks are well-adjusted. They work to maintain balance in life, and especially with their personal finances.

That said, I've noticed that a lot of retirees — early retired or otherwise — struggle to know how much they should spend. I believe this dilemma exists for a couple of reasons:

The general response to these two problems is to follow what has been dubbed the four-percent rule. Generally speaking, it’s safe to withdraw 4% from your portfolio every year without risk of running out of money. (There are a lot of caveats to this guideline. To learn more, follow that link to my Money Boss article — or wait for that story to migrate to Get Rich Slowly in a few days!)

The AAII Journal — the monthly magazine from the American Association of Individual Investors — has published two articles in recent months about the problem of spending in retirement. Let's look at what they have to say. END_OF_DOCUMENT_TOKEN_TO_BE_REPLACED