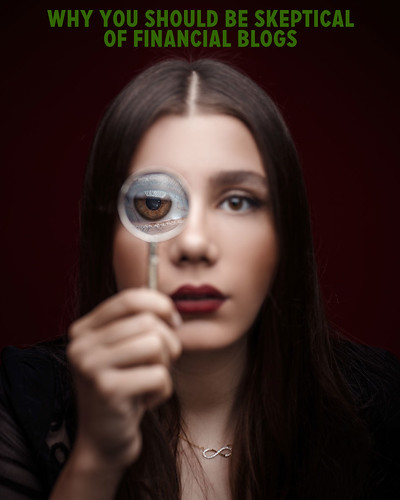 I've been blogging since before “blog” was even a word. (I wrote my first blog post twenty-one years ago last Thursday!) I've had a financial blog for a dozen years now. In that time, things have changed in a variety of ways. For instance:

Most of the changes in the world of blogging are neutral. They're neither good nor bad. They just are. But I think the move to a more money-centric approach often does a disservice to readers — to people like you.

How I Became a Blogging Cynic

Today, I'm much more skeptical. Why? Because most of my friends are bloggers, and I know what they think and say in private.

Now, these folks are not bad people — I love them! — but, like most of us, they'll sometimes put profit ahead of, well, truth. Honesty. Objectivity.

I'm not willing to criticize other financial bloggers for what they do. I'm not in their shoes. Their business is not my business. They're free to make choices that adhere to their personal ethics. (My hope is that they're at least considering ethics when they make these choices.)

But I have to say: The stuff I hear and see behind the scenes has made me cynical. I've become skeptical of the stuff I read on other money blogs. (Not on all money blogs — I'll recommend some I trust later — but on many of them.) END_OF_DOCUMENT_TOKEN_TO_BE_REPLACED

I told you I wouldn't be able to stay away until Monday's official restart date!

While browsing Facebook this quiet Sunday morning, I saw this awesome home-made car commercial. It's personal. It's fun. It has better production values than many actual car commercials.

This is just your run-of-the-mill used car. It's a 1996 Honda Accord with 141,095 miles on it. (My girlfriend Kim drives a 1997 Accord with 227,000 miles, so I'm very familiar with this vehicle.) But this is not your run-of-the-mill used car ad. Because the couple that's selling this vehicle put some time and effort into this ad, they're going to sell it for a lot of money.

As I write this on Sunday morning, the eBay listing for the car is at $150,000. That's a bogus bid, obviously, which is too bad. (The couple will have to relist this from scratch, I think, after the auction ends on Thursday.) But it's an example of what smart marketing can do.

Back when I was getting out of debt, I sold a ton of stuff on eBay and Craigslist. I made good money doing it, generally bringing in 50% to 100% more than other people were getting for similar listings. How? I provided tons of info, great photos, and a personal touch. Most listings in online ads are boring. Mine weren't. I was thorough, honest, and fun. As a result, people were willing to buy my stuff.

I never produced a home-made car commercial like this one, though. If I ever need to sell my beloved Mini Cooper, I'll remember this. (The clutch died on my Mini on Saturday afternoon, by the way. Kim and I were driving home with a growler of beer, and the car conked out on the 16% grade near our house. Kim walked home with the beer while a local Good Samaritan towed me back to the house. Good thing I have an emergency fund!)