Earlier this month, I shared a link to a comprehensive guide to certified pre-owned vehicle programs. In doing so, I mentioned that Kim and I both believe that you should drive a car until it dies. This prompted a great question from Tired Scientist in the comments. She wrote:

I'm not sure there's any one right answer to this question. There are several ways to decide that a car is dead, and it's up to you to decide which definition applies to you. Let's look at a decision I made recently — then talk about what other people think. 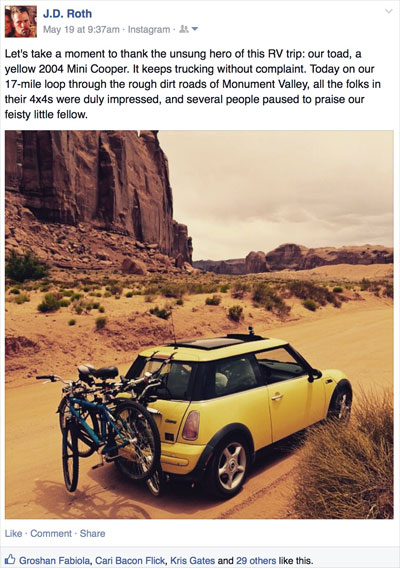 I love my Mini. I love how compact it is. I love its fuel economy. (It still gets over 30 miles per gallon even at this age!) I love how fun it is to drive. And I love how reliable the car has been despite not always being treated well. During our 15-month RV trip around the U.S., Kim and I towed the Mini behind the motorhome — and we used it for the kinds of off-road adventures that Minis were never intended to have.

Two weeks ago, for instance, the car died while climbing the 16% grade near our house. The clutch went up in a cloud of stinky, stinky smoke. When I had the car towed to our mechanic, he found evidence that the transmission was failing. “It'll cost about $1600 to fix the clutch,” he said. “And I found a used transmission I could install for about $1900.”

As much as I love my Mini, $3500 is a lot of money to put into repairs for an older car. In fact, that's nearly as much as the car is worth! (According to the Kelley Blue Book website, my 2004 Mini Cooper is worth roughly $3741 if I were to try to sell it to a private party. It's worth much less in dealer trade-in value.)

I had a decision to make: Do I scrap the Mini and buy a replacement? Or do I make the repairs and continue to drive an older car? END_OF_DOCUMENT_TOKEN_TO_BE_REPLACED