Last night's recipe from HelloFresh was Bulgogi Pork Tenderloin. As always, the instructions were clear and easy to follow. As always, it took me about twice as long to prep things as the recipe card said they would. 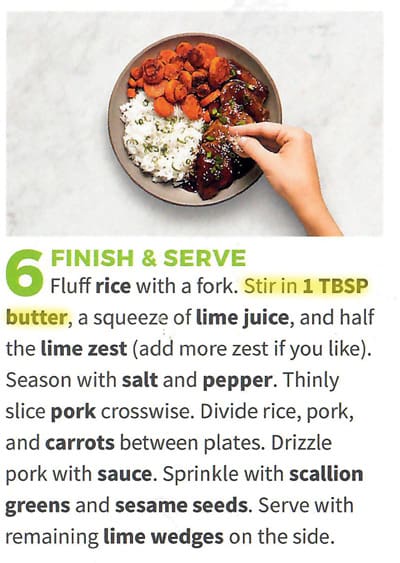 I chopped the vegetables, boiled the rice, seared the meat, made the sauce. But when I reached the final step — “finish and serve” — I hit a wall of sorts.

“Ugh,” I said to Kim, who was playing with our three cats and one dog simultaneously. “The recipe calls for a tablespoon of butter in the rice. I hate adding butter to rice. It makes it gummy and gross. But HelloFresh always wants me to do it.”

“I like butter in my rice,” Kim said, throwing a bacon ball for the dog while kicking a catnip toy for the cats. “But if you don't like it, don't add it.”

I sighed. Of course, she was right: Just don't add the butter! Such an obvious solution, right? Yes — and no.

You see, I am fundamentally a Rule Follower. When I'm cooking, I follow the recipe exactly. When I'm building an IKEA desk for my new office, I follow the instructions exactly. On the road, I generally stick to the speed limit (which sometimes drives Kim nuts). I used to take pride that never once did I cheat on my homework or tests in high school and college — and I never helped anyone else cheat either.

As I said: I am, fundamentally, a Rule Follower.

This has been true when it comes to managing my money too. Since beginning my quest to become the CFO of my own life fifteen years ago, I've surrendered to wiser minds than mine. I tend to heed the time-tested “rules of money”, rules like:

Following these rules has proved profitable. These “rules” are rules for a reason. Because they work. They allow folks to get out of debt and build wealth. Crazy, right?

Here's the thing, though. As effective as these financial rules have been for me, as much as I like strictly following a recipe, I've also come to realize that sometimes it makes sense to (gasp!) break the rules.

The challenge, then, is determining when to follow the rules — and when to break them. END_OF_DOCUMENT_TOKEN_TO_BE_REPLACED