Who am I kidding?

I can't go an entire month without publishing anything here at Get Rich Slowly. I need to write. And judging from the feedback regarding my planned sabbatical, you folks want me to write! Tell you what, let's change the premise.

Instead of taking all of September off from publishing, I'll instead vow that for the next four weeks, I won't tackle any major articles. If there's something that I want to share and that thing can be shared in 20-30 minutes, I'll do it. This plan will serve the same objective — freeing my mind to focus on the other tasks that need to get done around here — while also giving me an outlet for my writing (and giving you something to read).

Instead of a “silent September”, we'll have a “subdued September” here at Get Rich Slowly. Now and then, I'll share some quick and interesting money stories.

A History of U.S. Bull and Bear Markets

Here, for instance, is a chart providing a succinct history of the U.S. bull and bear markets since 1926. (Click to open a larger version.) 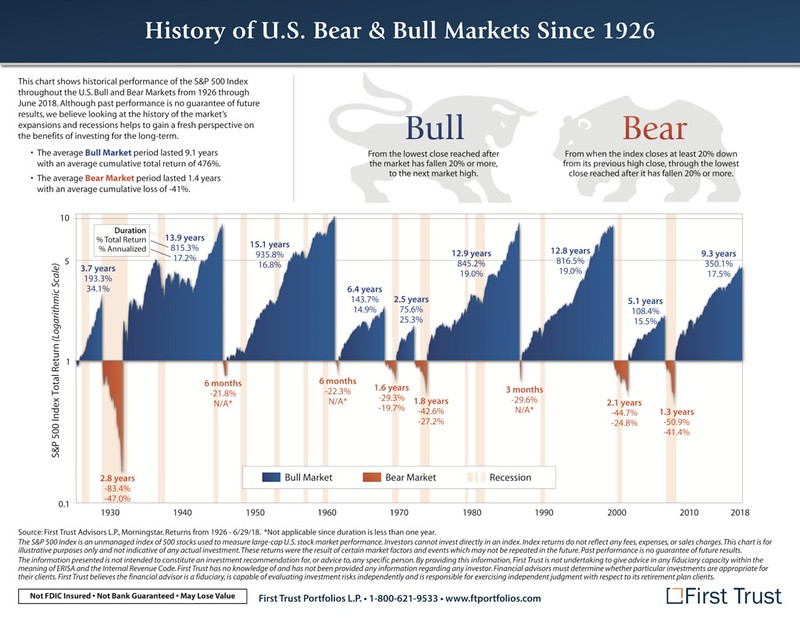 I love this chart! Produced by First Trust Portfolios (and using market data from Morningstar), it mirrors a similar chart from 2014.

This chart is unique because instead of showing stock market growth as an unconnected line, it deliberately resets each individual bull and bear market to a baseline. Bear markets are shown in red. (Or is that orange?) Bull markets are shown in blue. They're plotted on a logarithmic scale.

A “bull market” here is defined as running “from the lowest close reached after the market has fallen 20% or more, to the next market high. Similarly, a “bear market” runs “from when the index closes at least 20% down from its previous high, through the lowest close after it has fallen 20% or more”. That's a little confusing, I know, but if you look at the chart for a few minutes, it should make sense.

According to First Trust Portfolios:

This chart makes it easy to visualize just how costly it can be to get gun shy after a market crash. If you stop investing — or worse, pull your money out! — you can miss out on huge growth.

The chart also clearly demonstrates that the U.S. stock market has been growing steadily for the past 90+ years with only occasional (relatively minor) speed bumps. If you let your investing policy be dominated by potential drops, you run a real risk of missing out on future gains.

(And honestly? As much as I'm against market timing, I wouldn't condemn anyone who looked at this chart and thought, “Hm. It looks like we're near the end of a bull market. Maybe I should cash out for a couple of years.” I don't plan to do that, but I agree it seems like we're nearing the end of this cycle.)