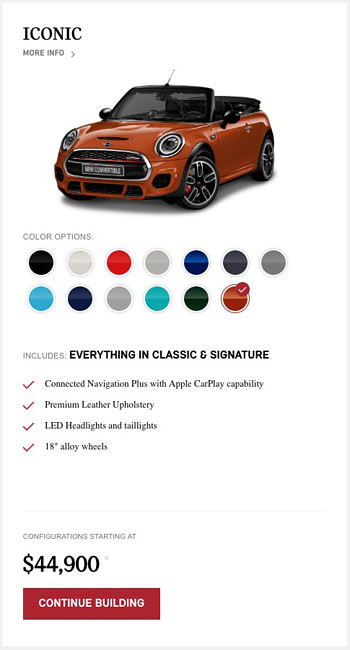 It's funny. Fifteen years ago, daily personal finance was a chore for me. I didn't understand how to go day to day making smart choices that were aligned with my values. I wasn't even sure what my values were!

Today, things are much easier. Sure, there are challenges. Sometimes I make poor choices. But mostly, what I spend aligns with what I want out of life. (With the caveat, of course, that who I am and what I want shifts over time.)

I'm glad I've developed good habits. Right now, it's keeping me from making a rash decision. For most of 2019, Kim and I have both been fighting the new-car itch. The old J.D. would have succumbed by now. This year's model still does dumb things like spending hours building custom cars on the Mini website, but so far I'm not scratching that new-car itch.

My Plan for Purchasing a New Car

“Look at this,” I told Kim a couple of weeks ago. I carried my laptop over to show her my latest Mini design: a super-powered orange convertible that makes no sense for our lives.

Kim shook her head. “You've got to stop going to the Mini website,” she said. “And you especially have to stop using that build-your-own-car tool. That's dangerous.” She's right.

Earlier this week, as Tally and I strolled through the hills and picked blackberries, I did some serious thinking about if/when I should get a new car. I think I've gained some clarity.

Sure, if I cashed out some of my investments, I could justify making this purchase today. But, as I learned last year, this sort of action carries a huge tax consequence. If I sold investments to buy the car, I'd effectively be paying a 15% premium to make the purchase. I'm not willing to do this.

Plus, it's hard for me to rationalize paying so much for a new car. It's crazy how expensive vehicles are these days. (Do I sound like an old man yet?)

Speaking of being an old man: The one thing that even allows me to consider a new new car is that I'm getting older. I'm fifty. It's highly probable that if I purchased a new vehicle, it'd be the last new-vehicle purchase of my life. (I tend to keep my cars a long time. I can see that at 67 or 70, I'd buy another used car because a new Mini would last me until then.)

While the dog sniffed the roadside for rabbits, I formulated an actual plan for buying a new car. I decided that there are three conditions that would lead me to make this purchase. From least likely to most likely, those conditions are:

If any one of these three comes to fruition, I'll do pull the trigger. I'll buy a new car. (Unless, of course, I manage to shake this new-car itch for good. But that's unlikely.) In the meantime, I'll make do with the two vehicles I already own: my 2004 Mini Cooper and my 1993 Toyota truck. I like them both and they run well. They're good enough, you know? END_OF_DOCUMENT_TOKEN_TO_BE_REPLACED