Inflation is the silent killer of wealth. Year after year, the purchasing power of your dollar (or pound or euro or yen) gradually erodes. My father was one of those “hide money under your mattress” type folks because he believed that was the best way to keep his cash safe. He was wrong.

If you sit on your money, it doesn't maintain its value. It loses value.

At his Carpe Diem blog, economics professor Mark Perry recently published a new version of the following chart, which visualizes the effects of inflation on certain consumer goods and services. 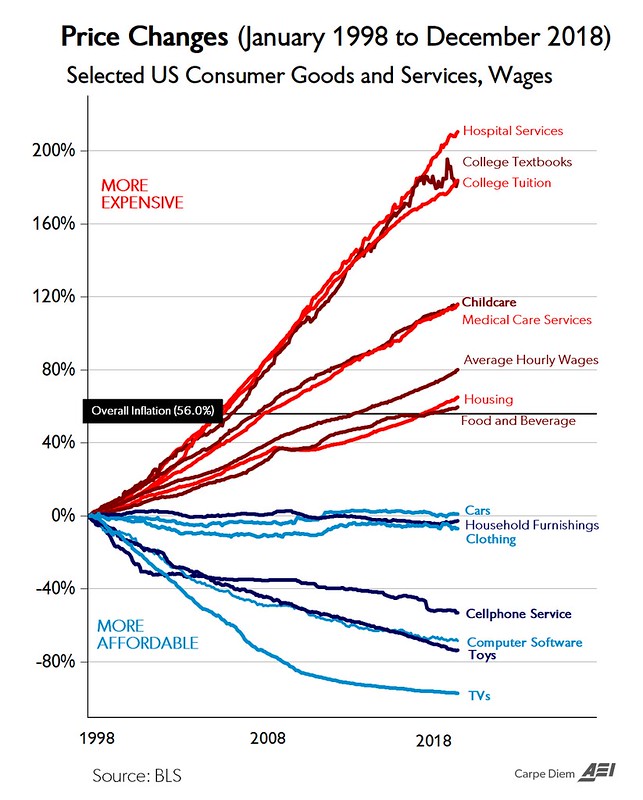 As you can see, this chart tracks 21 years of inflation data: from January 1998 to December 2018. (Perry uses official Consumer Price Index data from the U.S. Bureau of Labor Statistics.) He writes:

During the most recent 21-year period from January 1998 to December 2018, the CPI for All Items increased by exactly 56.0% and the chart displays the relative price increases over that time period for 14 selected consumer goods and services, and for average hourly earnings (wages). Seven of those goods and services have increased more than average inflation…The other seven price series have declined since January 1998.

In the chart, the black line indicates average inflation over the past 21 years. Red lines indicate items that have increased in price at rate faster than inflation; blue lines have decreased in price relative to inflation.

If you read the accompanying blog post — and especially the comments that follow — you'll see that people are quick to jump to partisan conclusions regarding this chart. “The more expensive stuff is a result of socialism and government regulation!” “The less expensive stuff is open to free market competition.” (These comments aren't surprising considering the blog is published by a conservative think tank.)

I believe these responses are overly simplistic. Besides, they miss the really interesting stuff.

For instance, look at the price of televisions. According to the CPI, the price of TVs has declined 97% in the past 21 years. I think we all know that's not actually the case. TVs have grown more expensive, along with most everything else. So, why does the data state otherwise?

According to the frequently asked questions about the Consumer Price Index:

A fundamental problem for the goods and services in the CPI sample is that their characteristics, not just their prices, change over time as the retailers introduce new versions of items and discontinue the older versions. In many categories of items, this is the primary time when price change occurs. The new version of the item may provide additional benefits or, in some cases, reduced benefits. This change in benefit is quality change.

To measure price change accurately, the CPI must be able to distinguish the portion of price change due to this quality change.

As new features are added to existing products, economists attempt to model what the new features are worth if broken down to their constituent parts. In 1998, your television was a boxy beast. In 2018, it's probably a big, slim wall-mounted display with dozens of nifty features. Each one of those features has a value that gets included in the inflation calculations.

If you could have purchased a modern TV in 1998, it would have cost a small fortune. And in 2018, an old CRT TV would only cost a fraction of what it did back then.

It's also interesting to note that the cost of manufactured goods (like cars, toys, and TVs) has declined more than the cost of services (such as medical care and education). I'm not sure why this is the case, but it's true.

Inflation statistics are one thing. Actual experience is another. When Kim and I complain about prices, food is what bugs us most. Nowadays, dinner in an average restaurant runs about fifty bucks. That would have bought a fancy dinner in 1998. Even my standard two cheeseburger meal at McDonald's costs more than $5 now. (I don't get it very often, but it seems like it should cost $3.) Groceries show similar increases.

Home prices seem outrageous in Portland still. Health care prices also seem crazy. We also think most entertainment options — movies, sporting events — are exorbitant. I think books are spendy too. (Do I sound like a grumpy old man yet?)

Meanwhile, clothing seems cheaper to me than it did two decades ago. (And I say this as a guy who used to shop at thrift stores!) Now that we're preparing to buy a new car, vehicle prices don't seem that bad — at least not for the low-end models we're considering.

As a final note, I'm puzzled by the items the chart chooses to track. They seem arbitrary. Why show toys and televisions but not energy or transportation? Why, specifically, cell phones? Why not entertainment and recreation? And so on.

I'd love to see a similar chart with a more robust set of data. (Maybe this is a job for Zach from Four Pillar Freedom?)

Charles Schwab has released its 2018 Modern Wealth Index, a survey of the saving and investing habits of 1000 Americans. Here's how the company describes its methodology:

The Modern Wealth Index…is based on Schwab’s Investing Principles and composed of over 50 financial behaviors and attitudes. Each behavior or attitude is assigned a varying amount of points depending on its importance, out of a total of 100 possible points…Quotas were set so that the sample is as demographically representative as possible.

And the higher a person's score in Schwab's Modern Wealth Index, the more likely they are to have a written plan!

If having a written financial plan is so strongly correlated with desirable monetary outcomes, then why don't more people do it? For most folks, it's because they don't think they have enough money to warrant one. 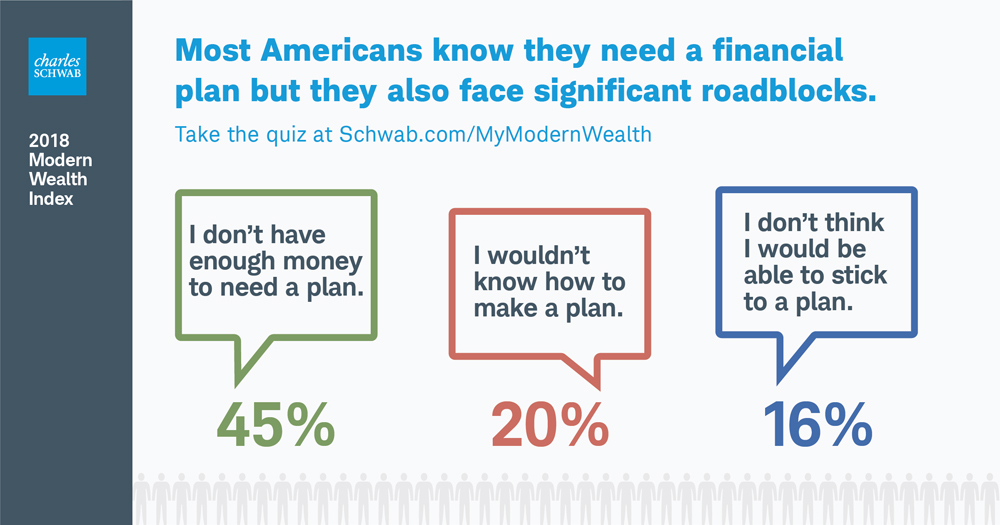 Personally, I've never had a written financial plan, although I do see their value. If I were to start again as an adult today, I'd probably create one.

I thought that the most interesting part of the Schwab survey was how participants viewed wealth. One question asked participants about their personal definition of wealth. What is wealth? Two of the top three answers weren't about money at all: 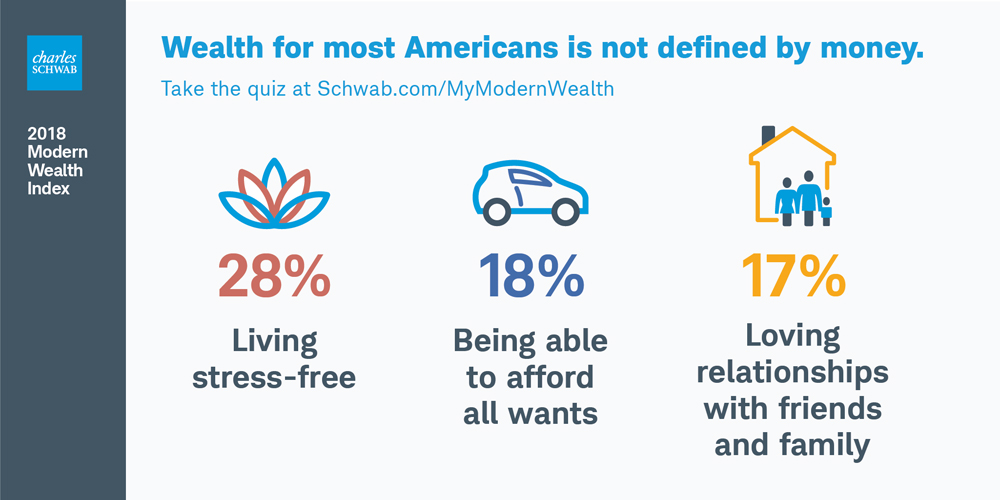 Related to yesterday's article about the relationship between time, money, and happiness, Americans say the things that make them feel wealthiest in their day-to-day lives are having personal free time and spending time with family. (When asked to focus on the numbers, respondents said they needed $1.4 million on average to be “comfortable”, or $2.4 million to really be wealthy.)

Want to see where you fit on Schwab's Modern Wealth Index? You can take a 16-question quiz at their website. But note that some questions aren't really applicable to folks who have already retired or achieved Financial Independence. Also note that you'll have to enter your contact info in order to actually see your results. (I took the quiz, but didn't see my results because I hate giving out personal info.)

Update! I just received an email from the Schwab PR team. As Rita noted in the comments below, it is possible to see your score without supplying contact info. When the contact info form appears on the screen, just leave everything blank and click the button below to move on to the numbers. I scored an 83. I think that's largely because I didn't know how to answer the income questions since I don't really have an income anymore. 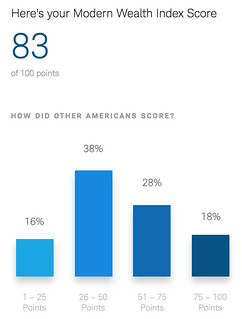