“When are you going to write about your hot tub?” readers have been asking. “We want photos of you in your hot tub.” Fine. Here's a typical scene on any given afternoon. (This photo was taken with my iPad, and I can't figure out where the camera lens is…) 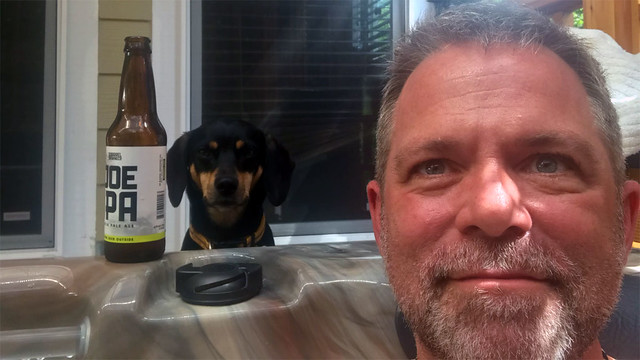 The cats like the hot tub too, but only when the lid is closed. I suspect they'll live on top of this thing during the winter. 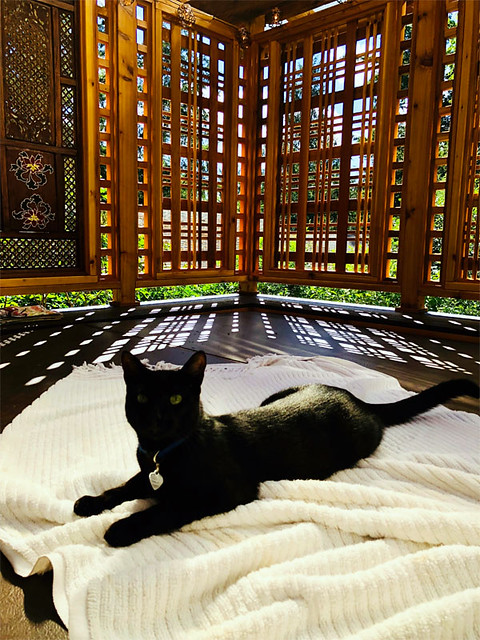 You folks were 100% correct when you encouraged me to proceed with this purchase. I was anxious after having spent so much on remodeling the house during the first few months after we moved in. I didn't want to spend more. But you guys encouraged me to throw in one fun thing along with all of the needed repairs. It was the right move.

A Money Nerd and His Hot Tub Spreadsheet

We've had the hot tub for a month now, and I'm pleased to report that we're using the hell out of it. (Rumor has it than many people who purchase a spa don't use as much as they think they will.) Because I'm a money nerd, every time I use the thing, I document my stats in a spreadsheet.

“What in the world are you doing?” Kim asked the first time she saw me head to the computer after a three-hour soak.

“I'm calculating how much value we get from the deck and hot tub,” I told her. She shook her head in disbelief.

Here, let me prove it to you. Here's a screen shot of our usage stats through last night. 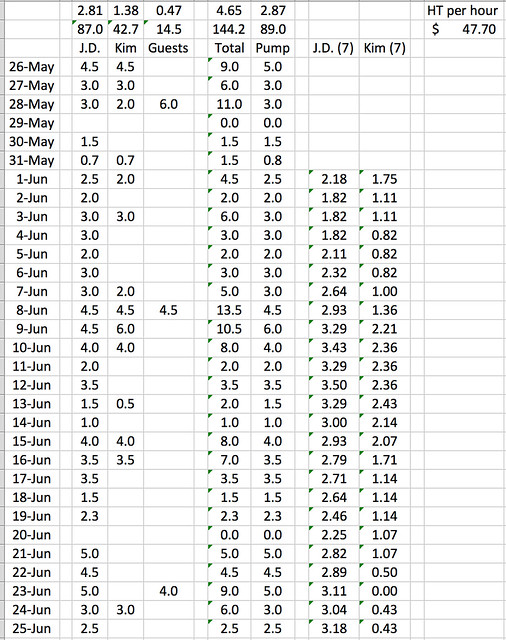 As you can see, I've used the spa all but two days during our first month of ownership. Kim uses it often too, but it's more difficult for her to find time. (Plus, she was gone for much of last week.)

I have zero clue how much electricity we're using. We haven't had a full month's bill yet. Plus, we'd need to compare it to the same month in the previous year, and our one-year anniversary of moving in isn't until this coming Sunday. That said, I know we paid $6800 for the hot tub, which means so far our cost per hour is $47.70. It'll take four years at this rate of usage to reduce our cost to a buck an hour.

“You know,” Kim said the other night. “You're the only person I've ever seen who keeps so many spreadsheets. Don't you think it's a little obsessive?” Well, maybe a little.

Other Nerds and Their Spreadsheets

But, as I say, I'm not the only one who does this. I have friends who do too. My ex-wife — whose birthday is today! — took a spreadsheet class several years ago and converted into a spreadsheet fan. And you know what? Get Rich Slowly readers, who are predominantly money nerds, are always telling me about their spreadsheets.

Last week, for instance, I exchanged email with an email subscriber named B.J. She takes things to a whole other level! She wrote:

I use my excel spreadsheets daily. I have pages from income-outgo by month, stocks owned and dividends expected, gifts given and birthdays, medical records, household inventory, special dates in my life, a tax sheet, a cars sheet, financial statement, address sheet, stock sold sheet, travel and cost sheet, a sheet for my 97 year old mother (I have taken over paying her bills), ebay sales sheet, a sheet of all the bills I have paid automatically, a sheet for the rental house next door, a misc sheet.

In her email, B.J. mentioned that since 2001 she's sold $406,065 worth of stuff on eBay. And she sent this screenshot from her spreadsheet to show me:

Why do we money nerds love spreadsheets so much? I think it's because we recognize that what gets measured gets managed. This is a big reason I encourage folks new to personal finance to track their spending. When you keep a daily log of how you handle your money, you become much more aware of your habits. (Although there are lots of awesome modern tracking tools like Personal Capital, I'm still a big believer in non-automated tracking.)

What about you? Are you a tracker? Do you use spreadsheets? If not, why not? And if so, what sorts of spreadsheets have you built? Maybe someday in the future, we can build a library of spreadsheets to share with GRS readers. I like that idea…

A lot of Get Rich Slowly readers like to get their hands dirty. Instead of paying for an app, they'd rather build their own expense trackers and net worth calculators and other money tools.

If you're one of these nerdy industrious folks, check out how the anonymous bloggers at Waffles on Wednesday made their own free mobile expense tracking app — without coding.

Here are the basic steps to creating your own customized expense-tracking app:

The authors built this tool to track business expenses, but the general idea is easily adaptable to tracking personal expenses. Over the years, readers have sent me a lot of personalized spreadsheets, but this is the first time I've ever seen anyone convert their tool into a smartphone app! I love it. 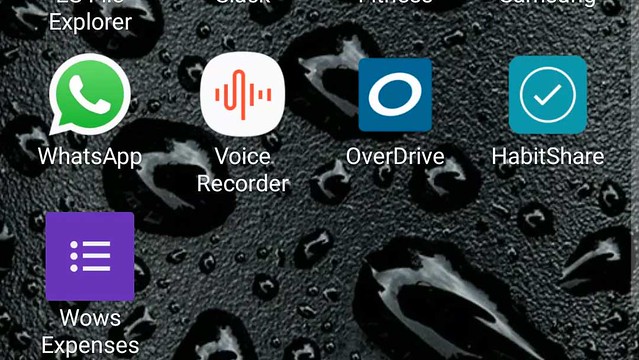 I know this might seem pretty techy to some readers, but it's actually not that complicated. If you've ever had to mess around with spreadsheets at work, you should have the skills to put this idea into practice.

I struggled with debt for years. I couldn't get a handle on where my money went. I made a decent wage, but I was always broke! Where did I spend it all? Then I read Your Money or Your Life and heeded the book's advice to “keep track of every cent that comes into or goes out of your life”. The results were startling.

What does it mean to keep track of every penny you earn? Your Money or Your Life recommends that you keep a Daily Money Log. This log can take any form.

Tracking your spending helps to demystify money — you begin to perceive it as a tool. You gain a sense of power — you no longer feel that money controls you, but that you control money. Your awareness of your money habits is sharpened, allowing you to make changes to improve your situation. This is an essential money skill, and it's easy. Try this for two weeks and you'll find that it becomes second nature.

When you track your spending, it's important not to make judgments. This activity is meant to describe your money habits, not to change them. (You do want to change them, of course, but that's a separate task.)

Here are some things I've learned over the past few years of tracking my own spending:

Here's what works for me:

This process paints a picture of your spending habits as they actually exist, not as you think they exist. You can use this information to create a budget. Or, at the very least, to serve as snapshot of where your money goes. Without this method, it's difficult to know exactly how much you really spend on thneeds or zizzer-zoof seeds.