The best time to buy almost everything 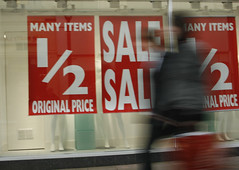 My mom has a sixth sense when it comes to bargain hunting. Where I'm thrilled to get 25 percent off and free shipping, she's finding deals of 70 percent off and getting inside scoop from the salespeople, who probably have her on speed dial should a ginormous everything-must-go-or-we-torch-it clearance sale come along.

Okay, so I'm exaggerating, but not by much. The point, however, is that the key to finding bargains is timing—off-season, end-of-season, new models bringing down prices on the old models. There's a pattern and a perfect time to buy just about anything.

When possible, plan your purchases by using the following list to score the best deals and to keep more of your money in your high interest savings account:

Tip: In general, you'll find a good deal when an electronic item is outdated. Wait until after technology shows like MacWorld and the International Consumer Electronics Show to see if your iWhatever will be discounted to make way for the next big thing.

I might not ever be as good as my mom at bargain hunting, but knowing when to shop might make me almost as good. If you're one to make resolutions every new year, resolve to save money and correcting your small errors by including a check on your free credit report to make a huge difference in your purchases in 2010 by timing your purchases.

The best way to spend less? Cut back on the big stuff!

My unconventional plans to pay for my daughter’s college education

Who invented the index fund? A brief (true) history of index funds

Yes! Sign up and get your free gift
76 Comments
Oldest
Newest Most Voted
Inline Feedbacks
View all comments

As featured in:
3 shares
wpDiscuz