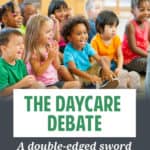 As many of you know, my husband had a career crisis that left him unemployed for several months last summer. It was scary, but we learned a lot from the experience — including the fact that ;the grass isn't always greener and that we really needed to learn to be happy with what we had. And, beyond that, we now feel blessed that he found a new job he likes, even though it required us to move to a pricier area.

But moving isn't always all fun and games. In fact, buying and selling a home can have serious financial consequences that last for years or even decades. Since we knew that ahead of time, we thought long and hard about what we could do to ensure the move was good for us not only emotionally, but also financially. So, to diminish any financial consequences caused by the move, we used the opportunity to downsize into a reasonably-priced, smaller home.

That tradeoff has been well worth it in my eyes. I hardly notice that we lost 400 square feet when we moved, and I mostly made up for it by de-cluttering and being smart with the space we do have. However, I did stress at first about how our monthly expenses might change. What would the utility bills be like? And would our grocery bill be comparable to what it was before? Those kinds of questions caused many sleepless nights in my house for some time — as if the move itself wasn't stressful enough.

The Daycare Bomb Goes Off

The first daycare we looked into had a location that could not be beat. It was directly outside of our new neighborhood. I instantly had visions of us walking there each day, holding hands and stopping at the little park on the way home. But with a fancy building and a huge outdoor playground, I knew it would be costly. But how expensive would it be? I wasn't sure.

Unfortunately, I quickly learned they charged $450 per week for full-time care for two kids. In other words, almost $2,000 per month.

The second center we considered was recommended to me by a friend I know from high school.

“They teach baby yoga and Spanish,” he gushed as he explained all the extra perks they included in the deal.

That sounded great, but could I afford it?

Not by a long shot. In fact, putting my kids in the second daycare would consume nearly all of my take-home pay. No thank you.

Still, I got lucky. Even though the traditional daycare centers here are relatively expensive, there are many smaller in-home daycares still offering full-time care at a price most families can afford. After conducting some research, I found a small, in-home daycare that would take my kids for about half the cost of what I would pay elsewhere.

And while it isn't exactly the daycare of my dreams, I had to take it. After all, what other choice did I have?

When You Can't Afford Daycare

My friend Cat, on the other hand, found herself unable to afford daycare after her husband, a medical student, was assigned his residency just outside of New York City. The young mother of newborn twins, Cat is lucky to stay busy at home with freelancing jobs and her website, Budget Blonde. However, that doesn't mean the situation is without its challenges.

“It's much harder than I imagined, and I had a lot of trouble adjusting at first,” she told me. “I've learned that I have to get work done between 6 to 9 in the morning and between 7 to 12 at night when they are in bed.”

According to Cat, the average cost for full-time daycare in her county comes in at around $13,214 per year for a newborn. And she's got two. My wallet just shuddered at the thought.

Since she can't afford traditional care, Cat has a mother's helper who stops by a few times a week to watch the kids while she works. It isn't much, but living in a high-cost area means that is all she can afford for now.

The Growing Cost of Daycare

It's no secret that the cost of daycare is spiraling out of control and consuming more of the average family budget with each passing year. A recent study illustrated how a single parent working a full-time minimum job no longer earns enough to put two kids in full-time daycare in most cases, meaning that daycare would consume his or her entire paycheck — not leaving so much as a penny for housing, food, or anything else. To add insult to injury, another study shows that daycare now costs more than the average cost of in-state college tuition in 31 states.

Since women are more often the ones electing to stay home with the kids, the scarcity of affordable daycare often results in a disproportionate effect on their ability to earn, according to The New York Times. Sociologist Joyra Misra even refers to the phenomenon as “The Motherhood Penalty,” a term used to describe the financial sacrifices women face when they step away from the workforce to raise kids.

When Women Give Up Too Much

But some experts believe that women should think long and hard before deciding how to deal with the stay-at-home quandary. In fact, financial expert and author Laura Vanderkam believes that staying home to raise the kids could do more financial harm than good over the long run.

“You don't just lose the income you'd earn during the years you stay home, you lose seniority, skills, and connections, which affect your lifetime earnings,” she told me in an interview. According to Vanderkam, one study showed that women who take three years out of the workforce can lose as much as 37 percent of their earning power for the duration of their careers.

That's why she says it is important to think beyond a simple point-in-time analysis and look at the big picture.

“If you keep working, eventually your salary will rise and your childcare expenses will fall,” she says, adding that many women consider paying for childcare as an investment in their lifetime earning potential.

And it isn't only about your career, says Vanderkam. “Kids need time and money. Over time, investing in your career will help you earn the resources that will give your kids lots of opportunities: to travel, to go to the colleges they choose, to take music or sports lessons that help them figure out their passions.”

Laura Vanderkam has a good point. Stepping away from the workforce might save you money while your kids are young but cost you in ways you may never have never dreamed over the course of your career. Still, some women — like the theoretical parent working a minimum wage job I mentioned earlier — have no choice. When faced with paying for daycare or having a place to live, there simply is no debate.

With the cost of daycare spiraling out of control, it seems that any decision a family makes has consequences. The parent who stays home with the kids might be sacrificing their long-term career goals, and the parent who continues to work might be missing out on most of their take-home pay for years to come. With those options, it's no wonder that many working parents struggle to get ahead while their kids are young than spend decades making up for lost time. After all, what other option do they have?

That's why Vanderkam and other experts believe it is important for working parents to consider options beyond the normal 9 to 5. “There are lots of jobs that look a little different, and there's no reason to view this as an either/or situation,” she says. “Often, flexibility matters more than the total hours you work. If you can choose which 40 hours to work, you may find working full time to still be a pretty doable lifestyle.”

Unfortunately, not all parents have the option for flexible work hours, which can leave them facing a double-edged sword with immeasurable consequences on both ends. And even though the fact that kids are “only young once” might serve as consolation to some families, it certainly doesn't make the growing costs of daycare any easier to stomach in the meantime. That's why it is important to weigh the pros and cons of your situation and figure out what works best for your family in the short term and in the long term. Decide what you are willing to go without to get the kids through the early years. Then formulate a plan to make the transition as painless as possible.

“Working or staying home with kids is a very difficult decision, and it's important to look at the whole picture, not just the first few years,” Vanderkam says.

How does your family cope with the growing costs of daycare? What sacrifices did you make when your kids were young?

There are 120 reader responses to "The daycare debate: A double-edged sword".