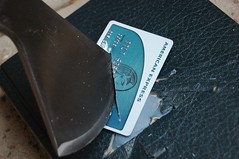 When I was a sophomore in college, I got my first credit card. I thought it was awesome — it was like free money. Soon I got another credit card, and before long I'd maxed them both out. I entered the work force with a handicap. I had the start of a nasty credit habit.

Because I'd grown up in a poor family, I had no notion of proper money skills. I made some bad decisions, which were in turn compounded by some rotten luck. Just five years after graduation, I had about $20,000 in credit card debt. For ten years, I tried to kick the habit. Sometimes I'd make progress, but then I'd find other ways to fall behind.

Here are some of the mistakes I made along the way and the steps I took to correct them:

I had no goals
When I was young, retirement seemed like something for old people. I did not understand the power of compound interest, that starting to save for retirement when I was 24 was far better than starting when I was 39. But more than that, I failed to set financial goals. I didn't dream of taking a trip to Europe. I didn't plan big purchases. If I wanted something, I bought it. On credit.

Eventually, I realized the only thing that the only person who cared about my money was me. I set a goal: be out of debt within five years. You know what? The very act of setting this goal made a huge difference in my life. Suddenly, my money had a purpose. I focused my efforts on debt reduction. I didn't get my debt paid off in five years — I paid it off in three.

I didn't establish an emergency fund
Many financial experts recommend starting an emergency savings account before you begin to pay off debt. I was arrogant. I believed this advice didn't apply to me. But then my car broke down and I needed to make $800 in repairs.

Because I didn't have an emergency reserve, I was forced to open a credit account at the dealership to pay for the repairs. This debt felt terrible. (It would have felt even worse if I'd put it on an existing credit card.) I paid it off as soon as possible, and then paused my debt elimination plans for a few months in order to stash $1,000 in the bank.

I didn't track my spending
One reason I was able to get so deep into debt was that I didn't track where my money went. It was like a black box. I just spent to my credit limit. Once I started tracking my spending in Quicken, problem spots became obvious. By tracking every penny I spent, I had a clear idea of how much I was actually earning and spending, not just vague guesses. (If I were starting now, I might use a web-based tool like Mint or Quicken Online.)

I tried to pay high-interest debt first
Most of the financial gurus give the same advice about debt reduction: eliminate your debts starting with the highest-interest rate obligation first. This makes sense mathematically, of course, but what these experts fail to understand is that debt isn't about math — it's about mental mistakes. If debt were about math, nobody would have it.

For years I tried to pay off my high-interest debts first, but I'd always give up. My high-interest debt had high balances, and it felt like I was never getting anywhere. Then I read about Dave Ramsey's debt snowball. Using this method, you pay off your lowest balances first. This allows you to knock out a few debts right away, which gives you a tremendous psychological boost. Once I learned about the debt snowball, I was able to kick debt to the curb.

(Another valid approach is to first pay off the debt that bugs you the most. Have a loan from your brother-in-law that you feel guilty about? Pay that off before anything else.)

I led myself into temptation

I like comic books. I've collected them since I was a boy. As an adult, I discovered I could pay $20 or $30 or $50 each for bound volumes that collected many comic books at once. I have a weakness for these books.

When I started to pay off my debt, I kept going to comic book stores. “I'll just look,” I'd tell myself. But the thing is, I didn't just look. I bought. Every time I set foot inside a comic book store, I'd leave with a book or two. Comic books were my kryptonite.

Your kryptonite might be bicycling gear or yarn or shoes. Whatever it is, avoid it. If you know you have a weakness, steer clear of situations likely to make you spend. Remind yourself of your goals.

I treated mistakes as if they were the end of the world
Nobody's perfect. I made mistakes all the time as I was paying off my debt. As I mentioned, I'd sometimes find myself buying comic books, or spending $80 on expensive bottles of Scotch whiskey. When I was starting out, I'd let these mistakes get me down. I felt like they derailed all the work I'd done. But that's not true.

Paying off debt is like playing baseball. You go out there and do your best every single day. You follow the fundamentals. If you make an error, you don't give up — you make the play next time. If you strike out, you forget about it and step to the plate for your next at-bat.

I spent raises and windfalls

I used to view raises and tax refunds as a license to spend more money. $1200 back from the government? I'd use it to buy a new bike. A new raise at work? Time to subscribe to more magazines. Or maybe I can afford that deluxe cable package. I was succumbing to lifestyle inflation — as my income went up, so did my spending.

After reading Your Money or Your Life, I realized that the smart move wasn't to increase my spending, but to decrease it. I cut magazine subscriptions and cable television. Instead of spending my tax refund, I applied it directly to debt. Sure, it would have felt nice to buy a new television, but it felt even better to say good-bye to another credit card.

I didn't seek help
Like an alcoholic, I hid my habit. Maybe “hid” is too strong a word, but because Kris and keep separate finances I was able to hide my debt problem from her. (This is one of the drawbacks to such a system — there are drawbacks to joint finances, too.)

I knew I had a spending problem. I knew it intellectually, and I could feel it in my gut every time I bought something with a credit card. But knowing you have a problem and doing something about it are two very different things.

About five years ago, a friend heard me complaining about my situation. He didn't scold me. He didn't moralize. He just gave me a book (the aforementioned Your Money or Your Life) and suggested I read it. I was lucky. Though I didn't seek help, help eventually found me. I could have saved thousands — tens of thousands! — by admitting I had a problem early on.

The final secret
The biggest secret of debt reduction? Getting rid of it feels awesome. After living in debt for twenty years, I've spent about eight months debt-free. The sense of freedom is euphoric at times. Psychologically, I'm a new man.

The thing is, most advice about getting rid of debt is purely theoretical. It's written by pros in suits who think that debt is all about crunching numbers. It's not. If smart money management were just about math, everyone would be rich.

But smart money management is mostly mental. It took me a long time to learn that. Once I figured that out, I felt okay ignoring the advice from the “experts”. I learned to play mental tricks on myself. That's what helped me get out of debt.

Thanks to Leo at Zen Habits for the original idea for this article. It was intended to be a guest post at his site while he was on his honeymoon, but I didn't get it pulled together in time. Instead, I contributed a “best of GRS” article: How I paid off $35,000 in debt, and how you can too. Photo by Dan Esparza.

There are 74 reader responses to "The Dirty Secrets of Debt Reduction (and What to Do About Them)".