The High Cost of Modern Living 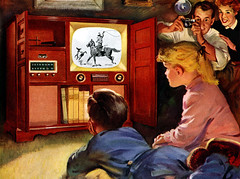 With all the hullabaloo over the release of the iPhone 4 this summer, and having just paid my monthly service bill for my own iPhone (an older version, thank you very much), I thought now would be a good time to think about how much all our modern conveniences cost us.

First off, buying the new iPhone might have cost you an additional $500 on top of the actual price of the phone, if you were the silly person who paid that much to take Jordan Richardson's place in line on the day the iPhone 4 debuted, according to an Associated Press story. Richardson then paid someone farther back in line $200 for his/her spot, making a $300 profit — but he's still out that two hundred bucks because he couldn't wait! I bet Jordan and his patron — now that it's six weeks later, and a new iPhone 4 can be bought anywhere — wish they had that money back.

But even if you were so un-hip as to not wait in 11-hour long lines or pay people to move up, you are still paying a lot for that iPhone — or just about any other cell phone, for that matter. And by “you,” I mean “me,” since I have just such a gadget myself. Let's look at the numbers:

I'm certainly not alone in spending that much; plenty people spend even more, and that's not including the cost of the phone itself. Given that the median household income in America is approximately $50,000 a year, it's safe to say that there are people who are spending 2% to 3% of their annual income for the privilege of checking their Facebook pages in the movie theater while I'm trying to figure out what the heck is going on during Inception. (OK, a cell phone does more than that. For example, it might also give you brain cancer.)

Summon your inner grumpy old man
Cell phones are just one of the modern conveniences that we have come to think of as necessities. As Wall Street Journal columnist Jason Zweig wrote in his thought-provoking book, Your Money and Your Brain, “In 1957, the average American earned about $10,000 (adjusted for inflation) and lived without a dishwasher, clothes dryer, television, or air conditioner” — and more people reported being “very happy” than do now. All these conveniences involve monthly fees, up-front purchases, regular repairs, accessories — or all the above.

Besides not having to live in a shoebox and lick the road clean every morning (text version for those who can't watch video at work), kids today have all kinds of luxuries that weren't around 50 years ago. Here's some of the other Stuff that the past half-century has spawned to consume our money:

Not all these items are luxuries. Many enhance safety and productivity, and provide just the right combination of sweetness, crunchiness, and antennae-ness. Plus, since average household income has quintupled, we can afford more Stuff.

On the other hand, the list also demonstrates why some people might have trouble saving money. I often receive emails from readers who are in the second half of their working careers and yet have saved very little for retirement. A while back, I read a Washington Post article about a family that was struggling financially, including this description of their life: “The house is small, and the blare of Nickelodeon from the TV chokes the day.” Of course, Nickelodeon can only be accessed by paying for cable TV (a luxury we finally succumbed to last January).

My point, dear reader, is that there is a current and future cost to the modern lifestyle. For every dollar we earn, we could rightfully ask: “Do I want to spend a dollar today and work longer, or do I want to spend a few dollars in the future (assuming some compound gowth), when I no longer have to work?”

For some purchases, we'd undoubtedly still spend the money today. However, others may be providing less current satisfaction than what that money could provide in the future. Just something to think about. I know I'll keep it in mind when my cell-phone service contract runs out this spring, and I evaluate whether the $1,251 I have to earn every year for it is worth the $102,609 I could have (assuming a 6% annual return and 3% inflation rate of the cost of cell service) 30 years from now.

How to Get the Most Out of a College Job

How to interview a prospective employer